The models have been painted, rules and unit cards reviewed and everything is ready to go.  The scenario is #2, Tank Combat.  This is a simple scenario that will show the basics of the rules in the game. 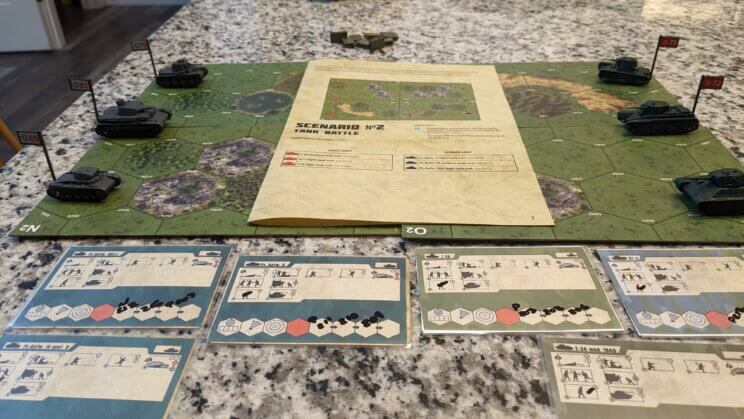 The goal of the game is to destroy as many enemy units as possible, or failing that, to destroy units with higher point values than you lose in the course of the game. 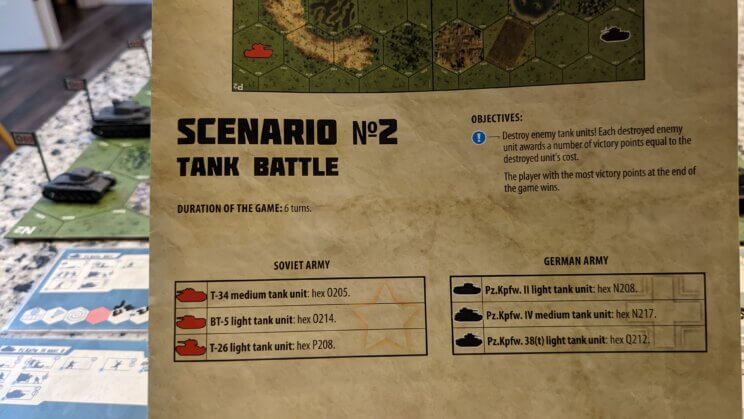 Turn 1.  The Germans and the Soviets are looking for movement to contact.  The Soviets push the T-26s into the ravine for cover.  The only way to fight into or out of a ravine is to be adjacent.  The T-26s will benefit from making the Germans advance to the edge of the ravine, giving the Soviets full fire dice to the Germans being minus for movement.  The BT-7s are positioned to move in to the ravine or remain outside. for maneuver.  The T-34s are positioned to provide flank protection. 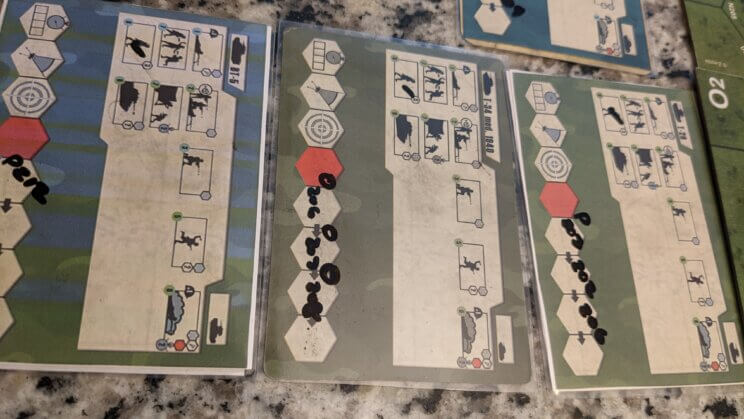 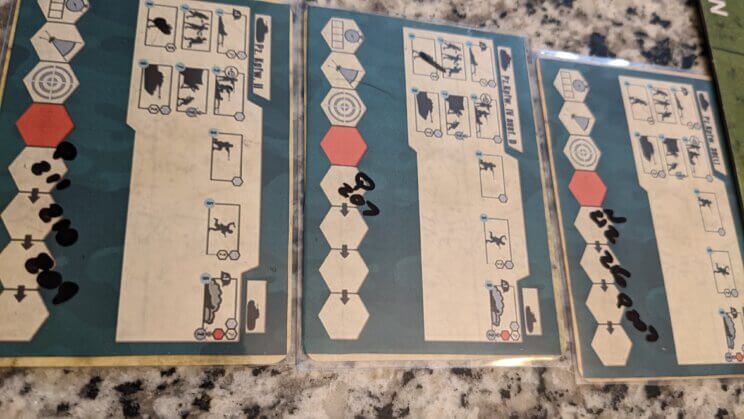 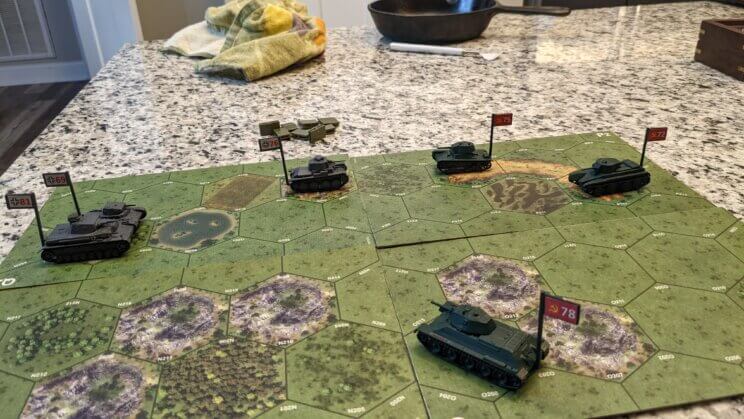 The German Mk IIs and Mk IVs move into the light woods.  There they will get a +1 to defense and be in a position to support the 38Ts moving towards the ravine, who currently have +1 defense in the town. 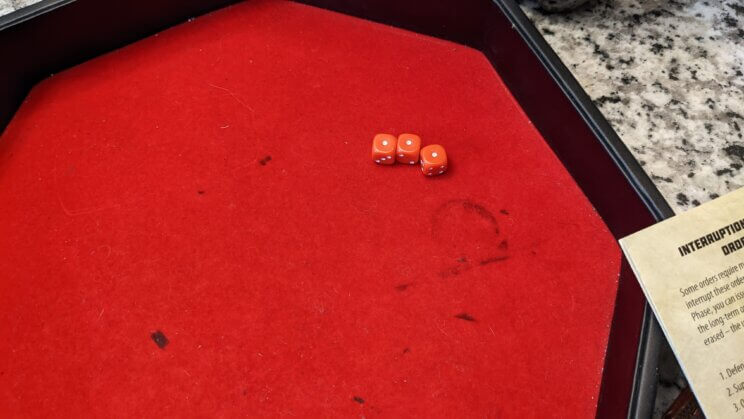 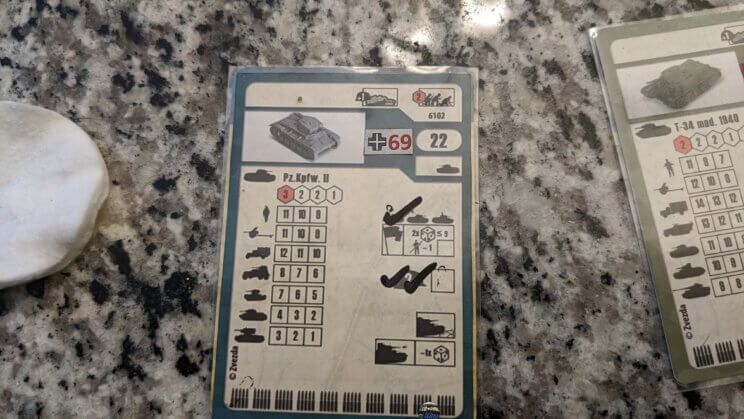 Turn 2 sees the T-34 fire on the Mk IIs.  They get 3 hits, which burns through the two defense and it takes one hit, marking off one of the three tank icons.  The 38T changed facing, the BT-7 moved up in to the ravine and the Mk IIs, passing their fortitude test and not becoming suppressed, moved next to the town. 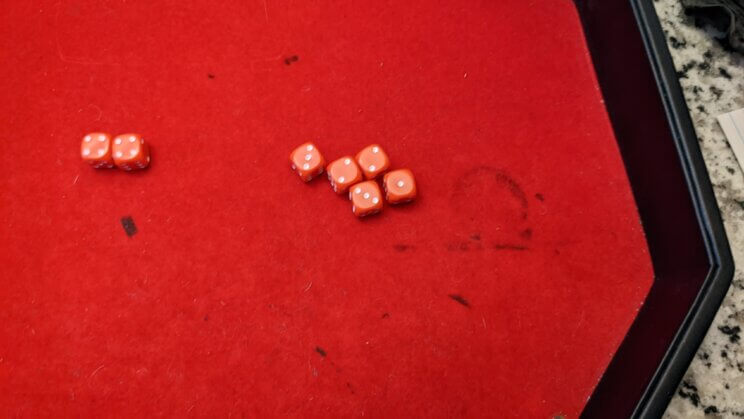 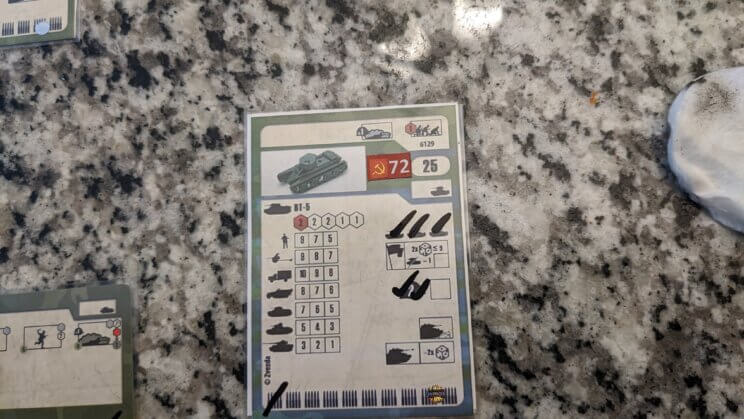 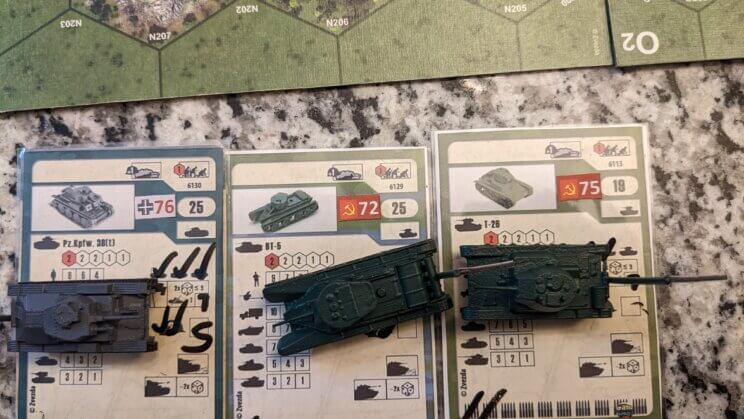 Turn 5.  Moving away at the ravine would mean leaving oneself open to fire without a reply.  The T-26s fire on the 38Ts and score 3 hits, destroying them.  The Mk IIs fired on the T-26s and finished them off.  The T-34 moved closer to the Mk IVs and fired, scoring 5(?!?!) on Mk IV, burning through the 3 armor, +1 armor for the town and 1 hit on the unit.  The Mk IV failed its fortitude test.

There is a very basic game of the Art of Tactic World War 2.  The game flows well once you have an idea of the orders and you know what you want to do.  For any future games, especially with a face to face opponent I will use the fine point erasable markers as they are much more readable.  Future explorations of the Art of Tactic system will use the 3rd edition rules and the other games where infantry, armor, artillery and air are used.  More to follow.