We live in a three-dimensional environment, so understanding how the nautical terms of roll, pitch, and yaw work can eliminate glaring errors and elevate our photos. While effects are obvious, others are unexpected. Here’s an exercise to hone your skills.

Those who come to me for training vary in their skills and experience. But there are some common traps many fall into, no matter their skill level. Minor changes to their shooting techniques can improve their photos tenfold. Often, it has to do with the angle of the camera.

If, like me, you can sail, then roll, pitch, and yaw are familiar terms. They are used by aircraft pilots too. They can also apply equally to the placement of the camera in three-dimensional space.

Roll is where the camera rotates sideways. The line it pivots on is known as the roll axis; think of a boat rolling from side to side in the sea. The consequence of rolling is that verticals and horizontals are canted.

As an interesting aside, horizontal is derived from the word horizon. That is an old word whose etymology has gone full circle. We get it from the late 14th-century French word orisoun, which in turn was derived from Old French orizon, and even earlier than that, orizonte. The French language got it from Latin horizontem, which stole it from the Ancient Greek horizon (kyklos), which means bounding (circle). Meanwhile, the old English word for horizon was “eaggemearc,” meaning eye mark, or the limit of one’s eye. At sea level, the horizon is about three miles distant before the earth’s curvature takes over. If the world were flat, we would see the sea stretching forever until the atmosphere’s impurities stop our vision. Those impurities are one of the reasons why it is better to get closer to a subject than using a telephoto lens.

Whatever we call it, our minds expect the horizon to be horizontal.

I live on the coast, and if a photograph’s horizon is slightly skewed, it sticks out like the proverbial sore thumb. Having it balanced is so essential to our understanding of the world that if we tilt our heads and look at a scene, the horizon still appears level to us. Within a photo, the horizon is compared with its frame, and we expect the frame’s base is parallel with the ground. Therefore, if the camera is tilted sideways, everything in the frame is at the wrong angle. Similarly, if a picture isn’t hung on the wall straight, it jars our eyes.

So, if the sea is flowing off the side of the frame, it’s not a good look. Admittedly, it isn’t always easy to get right with the camera. Historically, I struggled to see whether the horizon was straight when looking through the viewfinder. Luckily, my camera has a compositional grid and inbuilt level gauges. Even so, a wonky horizon is much more noticeable on my computer screen, so I sometimes still must employ the leveling tool in whichever software I use.

There is also the Dutch angle. That is where the camera is tilted deliberately to create tension. Dutch is a corruption of Deutsch, the German word for German. It’s so named because the German film industry heavily used it during the silent movie period. If used well, it can transform an image, but it can also be a cliché. It is often used without any real thought by the photographer. Employed correctly, however, it can work.

Pitch, also known as tilt, happens when we point the camera up or down. It has the effect of raising and lowering the horizon. That is arguably the first compositional technique novice photographers learn, especially regarding the rule of thirds. 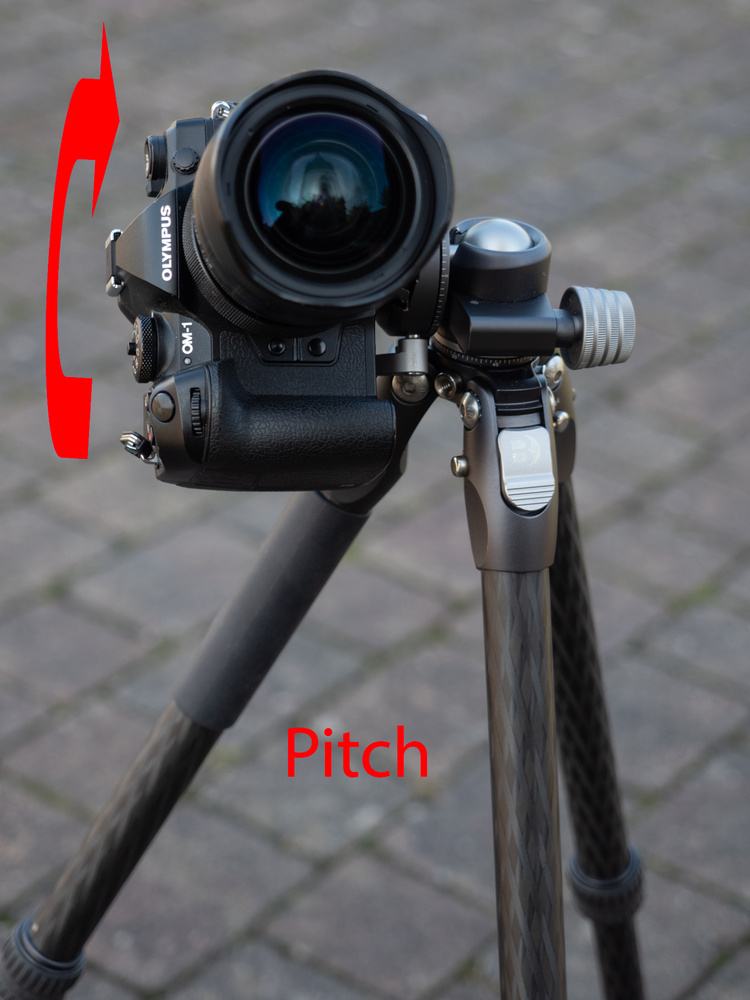 Pitch also changes the way the verticals appear in the image. When the camera is not parallel with the ground, verticals are no longer aligned along their length, but converge. When you look along a road or path, as it heads off into the distance, the path’s edges seem to get closer until they meet at a distant vanishing point. The same happens when we look up at a building. Its sides get closer together, ultimately meeting at a vanishing point in the sky. The more our cameras are tilted upwards, the more exaggerated this effect is.

Like the Dutch Angle, we can use that effect deliberately. Stand relatively close to a tall structure, point the camera upwards, and the sides of the building will appear to get closer together the further from the camera they are. However, we often want our verticals to appear perpendicular to the horizon. In that case, having the camera parallel to the ground is essential.

It is possible to some extent to correct converging lines in computer software. In Photoshop, going into the Edit menu, the Transform menu has Skew and Perspective that can help. The Perspective Warp tool is also found in the Edit menu. However, these tools can only do so much, so it is always best to get it right with the camera.

Yaw refers to the camera’s rotation on a vertical axis, turning the camera left and right. It is something that many people don’t think about when shooting photos, but it impacts photography. 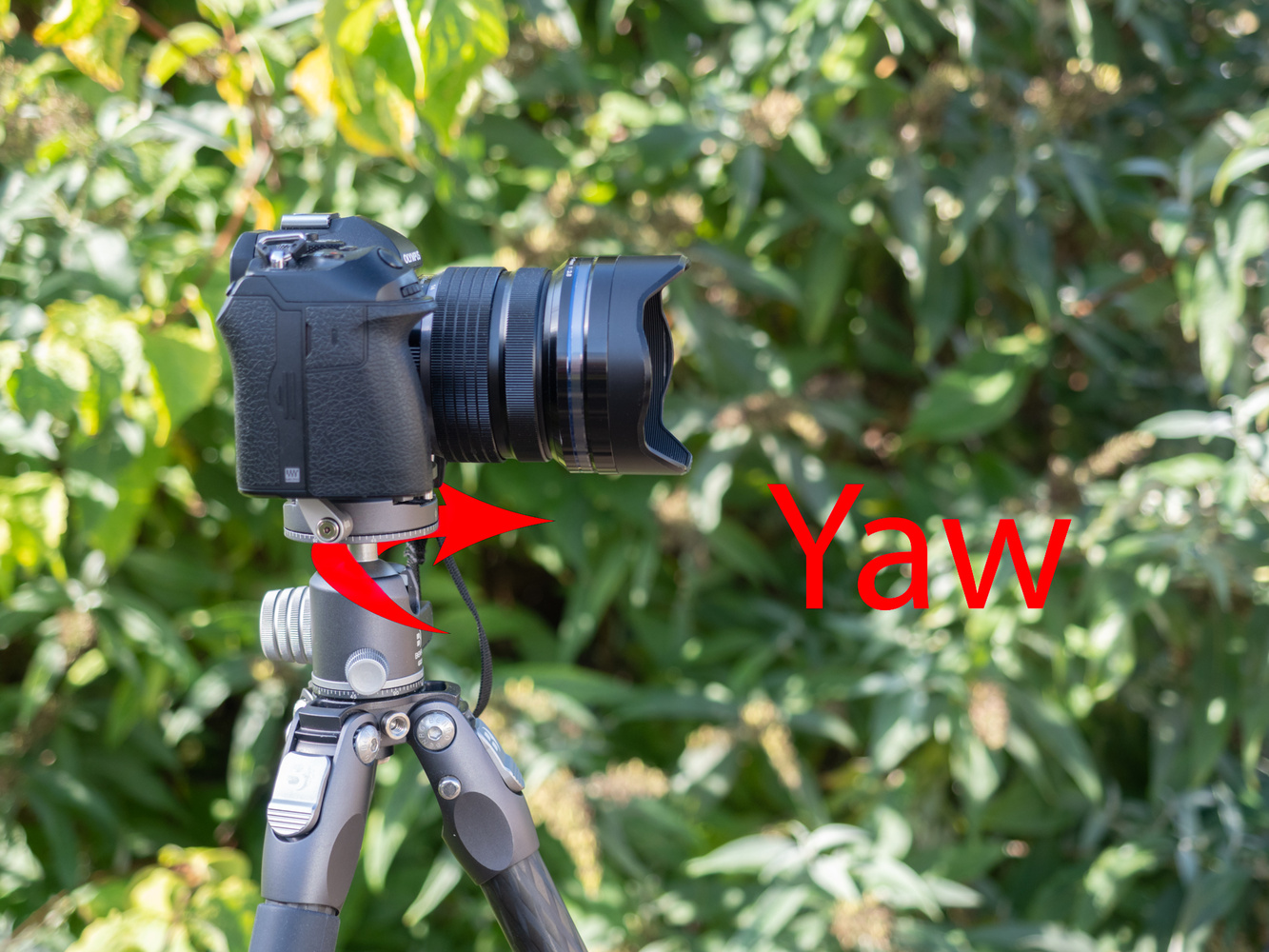 I know that shooting diagonally along the shore can create an imbalance in a photo as the leading lines of the horizon and the shoreline diminish to a vanishing point on the edge of the frame. Therefore, I usually try placing subjects in the frame to balance that.

However, shooting straight onto a subject can help reduce the illusion of perspective, especially when combined with other techniques.

When shooting interiors, the camera’s position very much affects the image. Horizontal lines that run away from the camera take on incongruous angles if the camera is not precisely aligned with the walls and floor. Therefore, having the camera point directly at the center of a wall with no pitch, roll, or yaw will give you lines most appealing to the eye. If you cannot achieve that, the next best option is to shoot at 45 degrees into a corner.

The same applies to shooting down a street. In many cases, you want to have the verticals and horizontals aligned with the edges of the frame.

Here’s a helpful exercise to get your camera correctly positioned:

Firstly, set your camera up on a tripod in the center of a room. Ensure it is perpendicular to the opposite wall and parallel with the floor. All the opposite horizontals and verticals should appear at 90 degrees to each other. Take a shot. Now, change the roll, pitch, and yaw of the camera and take a photo each time. Observe how the images don’t look as good as when your camera was positioned correctly.

DPReview TV: The best and worst cameras and lenses of 2022: Digital Photography Review

High-Speed Sync And How It Works

The Golden Fields under the Trees – Stuck in Customs