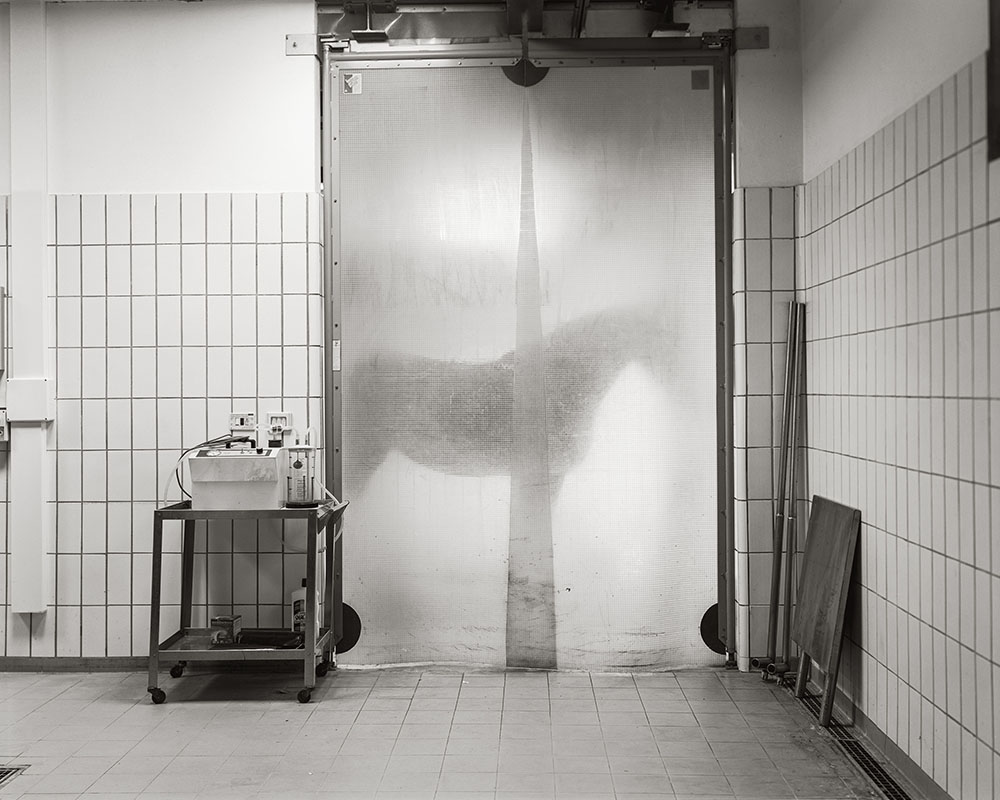 The result of more than eight years of intense work in Italy and the United States, Theatrum Equorum is acclaimed photographer Andrea Modica’s latest monograph with TIS books. As the title indicates, Modica’s interest lies in the drama of the horse – but her approach is one that completely upends expectations for such an exploration. Using her trademark 8×10 large format camera, she made these photographs at a renowned horse clinic in Bologna that attracts remarkable and often very valuable animals for a range of medical procedures including, among other things, fracture repairs, emergency colic intervention and dental work. “When I was invited to witness an operation, I was immediately drawn to the contrast of these magnificent animals rendered so vulnerable,” Modica says. “I instantly wanted to investigate with my camera.” 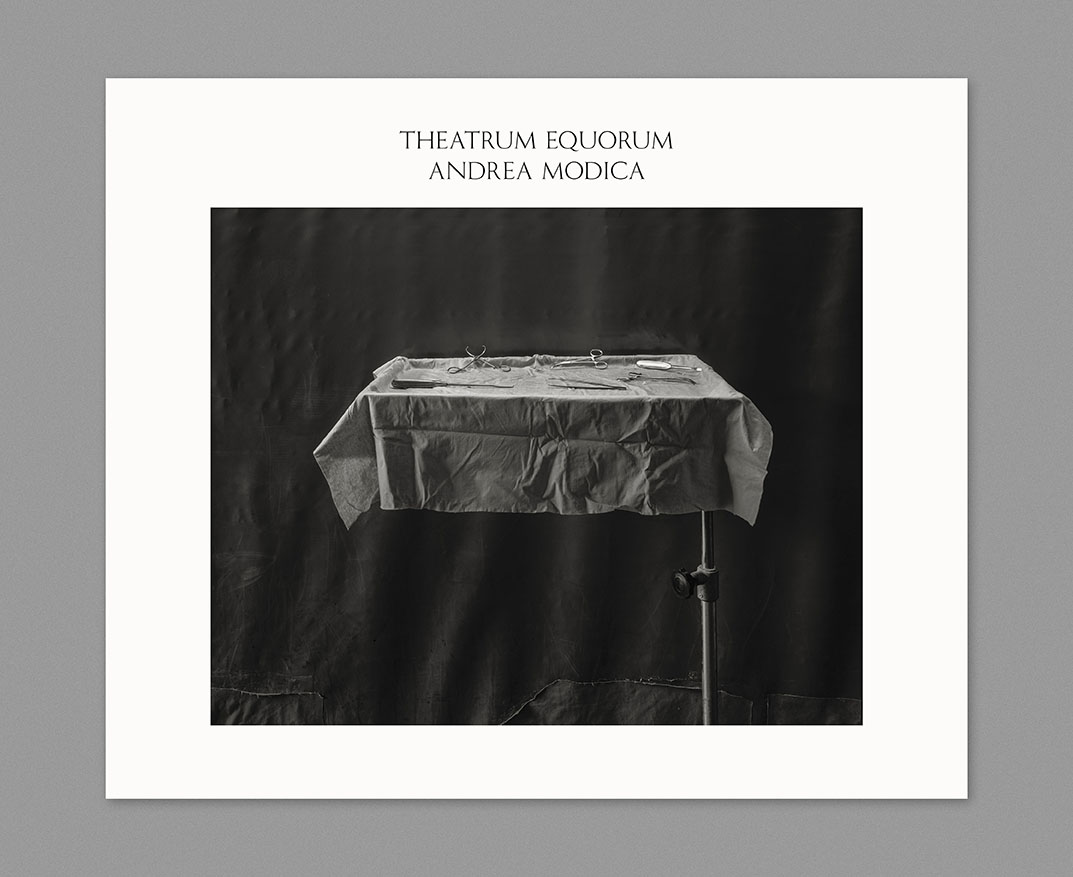 Tracy L. Chandler: Let’s start at the top. The title, Theatrum Equorum, translates to “theater of horses”. I understand this refers to the operating theater where these horse procedures take place, but with the curtained backdrops and subjects lit from above, there is a stage-like atmosphere. How did you come upon this dramatic location and subject matter?

Andrea Modica: I was in Italy at dinner at a friend’s home. This friend is a fantastic artist who also happens to be a world renowned horse surgeon. After dinner we walk over to his art studio to see what he has been working on. His studio is upstairs from the hospital. And I said, “Wait, what’s down there?” And he said, “That’s the theater.” I asked him to show me. The space is incredible! There are four rooms, two are operating rooms and the other two are padded rooms that they use for the horse’s recovery after surgery. He walked me through the process… They give the horse anesthesia, and once it falls asleep and drops to the floor, they raise it up by its legs with chains attached to a rail system so they can transport it to and from the operating room. Then after the surgery, they hoist it to the padded room where the horse will slowly awaken from the anesthesia without any stimulation or distraction. Well, it was late at night, I had a couple of drinks in me, and I looked at these recovery boxes and I thought of Joseph Cornell. My heart started beating and I was shaking, which is often what happens when I get an idea. And I said to myself, “This will be so hard, with the 8X10 camera. You’ve got to be kidding me.” And I immediately said to my friend, “I’d love to come photograph this.” And because he is an artist, he understood and agreed. So I started going when there were scheduled surgeries. I would be there to photograph and I would start by watching the operations. That’s the thing about photography, by the way, it provides this incredible entree into places you would rarely be in without a camera. 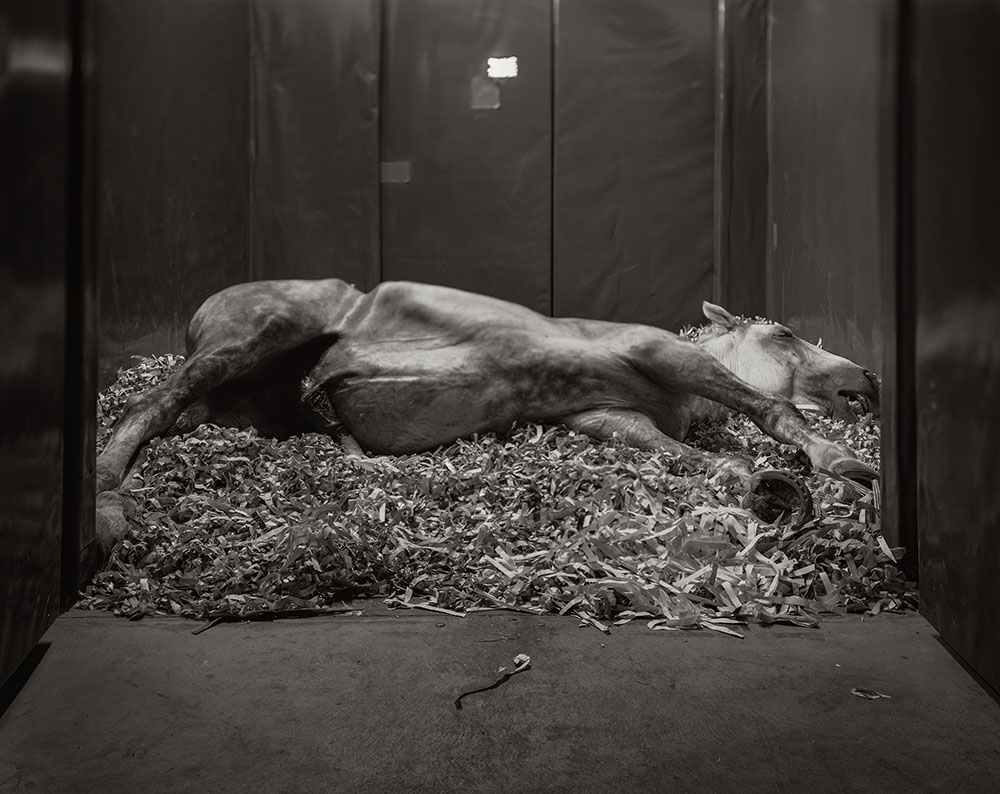 Tracy: Yes! Photographs themselves can give us access to unfamiliar worlds and the process of photographing can push us beyond our comfort zone. That reminds me, I have heard you say that you like being “off-kilter” when you photograph and that you only know you’re done when you are “no longer confused.” Were you off-kilter with this work?

Andrea: When I was photographing the horses, I would set up the 8×10 camera, and it would take me a while to get the movements in place, considering the angles of the box. I was allowed to stay and photograph the horse until it started waking up, indicated by the slightest twitch of an eye or ear. Sometimes this would take just a few minutes but never more than 15. At that point the anesthesiologist would slam the doors closed. Now as a view camera photographer yourself, you can understand the pressure and frustration. You are almost there and then slam! So that was part of the charm of the project. It was exactly the wrong camera to be using for this work. And I have to say, it was really challenging, often frustrating and completely gratifying. 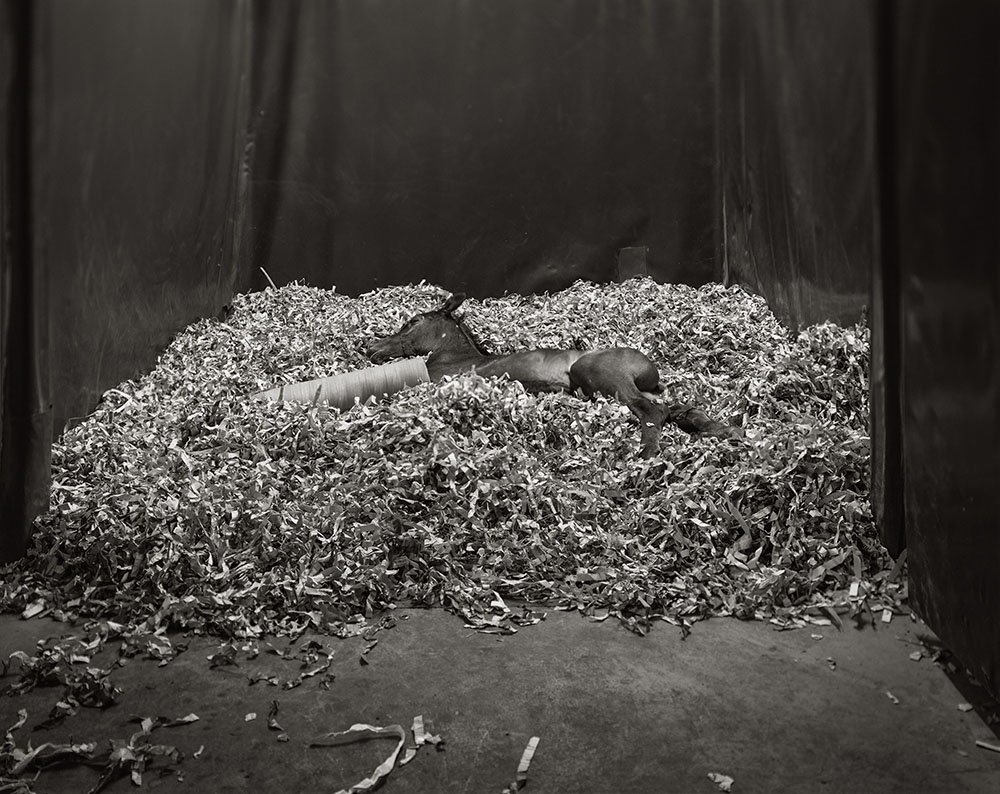 Tracy: Ugh, the pressure! It must have been a reprieve to have other things to focus on as well. Beyond the horses you have photographed various instruments and surgical tools. Their hard steel structures are rendered so delicately that I think of the precision and nuanced care it takes to work on these animals but the scale is hard to grasp. These tools are larger than you may think as they must match these massive bodies. Can you talk about these still lifes and what drew you to make them? 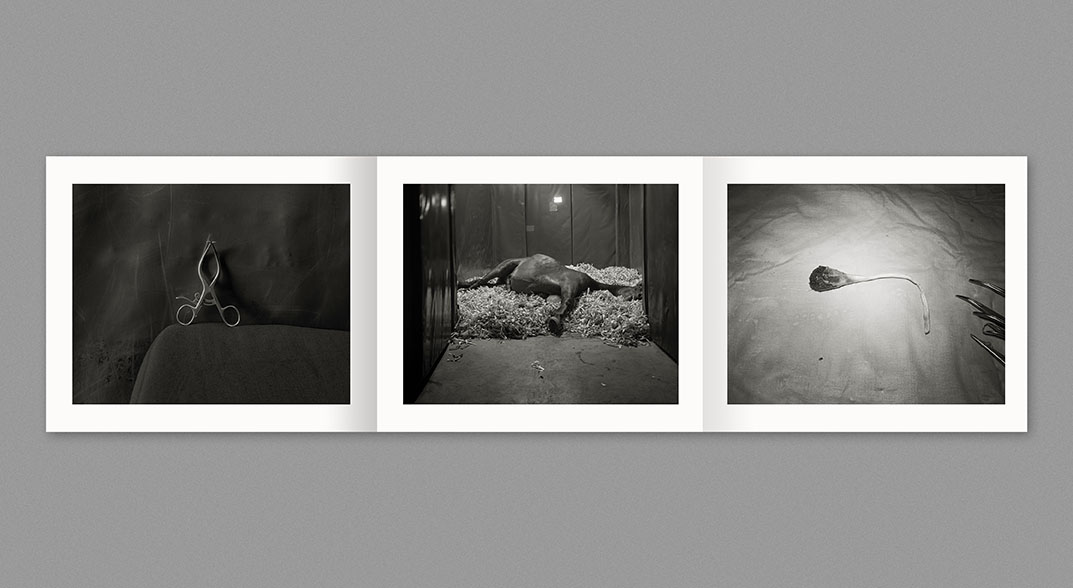 Andrea: The surgeon would arrange his tools himself. After he sterilized the instruments, he would set everything up in a systematic way, a pointed attempt at control. But if the operation was an emergency or particularly messy, when he finished there might be blood and bits of bone or cartilage everywhere, a real mess. It was all fascinating to me. The post-surgical instruments, in particular, read like tea leaves at the bottom of a cup. So in between photographing the horses in recovery, I rather obsessively photographed the surgical instruments, both before and after procedures. The image titles are wildly important. I titled the work after the names of each tool– for instance the Polansky Vaginal Speculum and the Serra Emasculator with Ratchet. I mean, the names of these instruments were gifts; I couldn’t have come up with better titles. 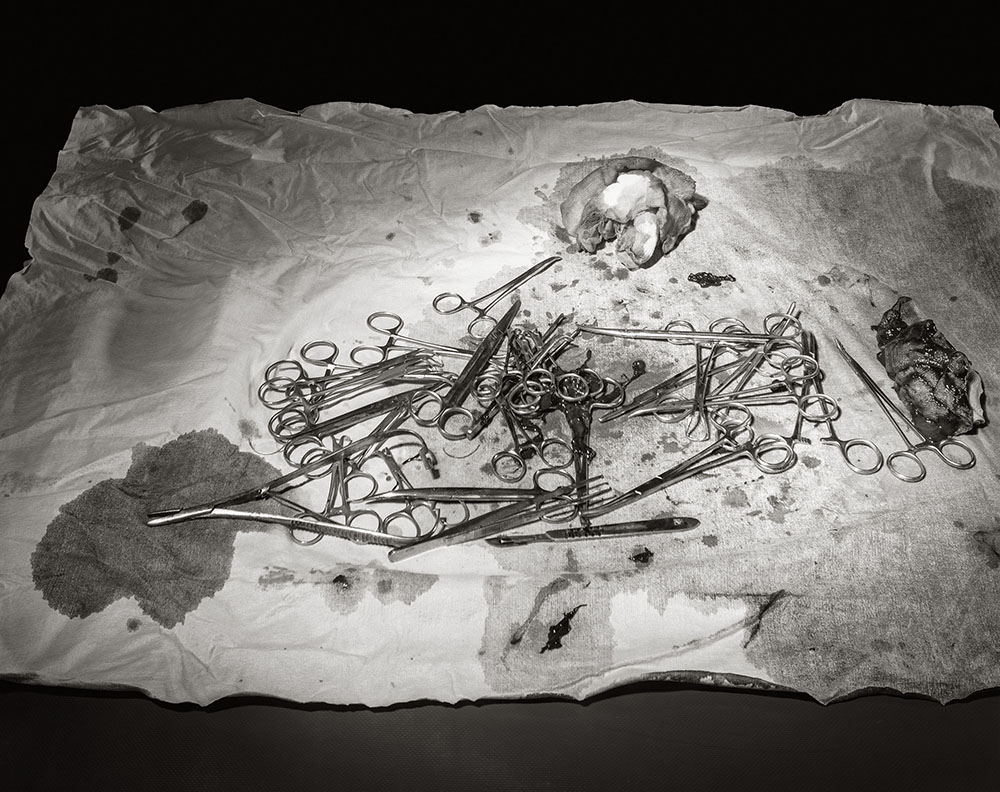 Tracy: The names are amazing. These dramatic titles help point to the physicality of what is going on beyond these pictures. Speaking of physicality, there is a photograph of a woman standing before the camera in a mask, gloves, and surgical gown completely covered in blood. It’s disturbing but at the same time she appears both statuesque and floating, almost angelically. This is the only human portrait in this work. Can you talk about this choice?

Andrea: Who wouldn’t make that picture? She came out of an emergency colic surgery looking like that. This is a woman I adore. She is incredibly devoted and smart and completely in tune with the horses. She’s a hero to me, an amazing person in that field and in that culture. But she doesn’t have any bravado. She’s humble. And doesn’t she look like a saint? 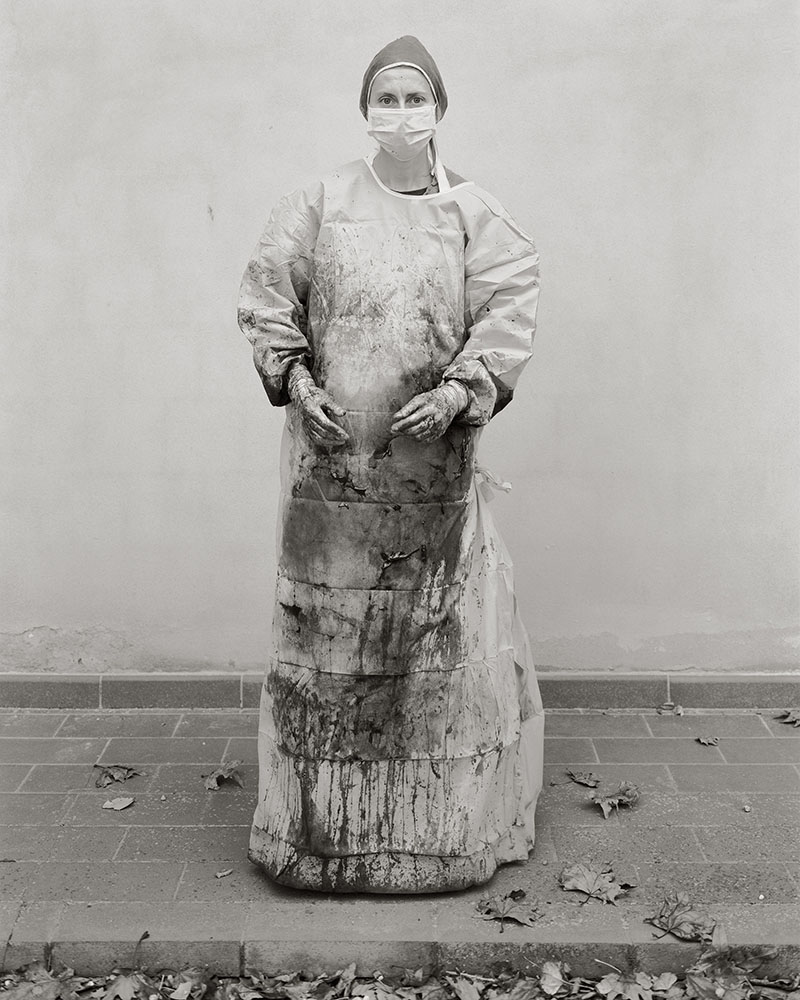 Tracy: She does. A statue of a saint. The texture on her hands are like stone, and her cap is a halo. All in contrast to this blood on her gown. It feels like we don’t need any other human portraits. She sums it all up for us. And she comes at the end of the book sequence, like a period at the end of a sentence. Speaking of the book, what is the process when working with TIS? How involved are you in the design, editing, and sequencing of the work?

Andrea: I’m super excited about working with TIS and having Carl Wooley design this book. I feel it is my job to collect the pictures and I’m honored to hand them over to Carl and Nelson Chan. 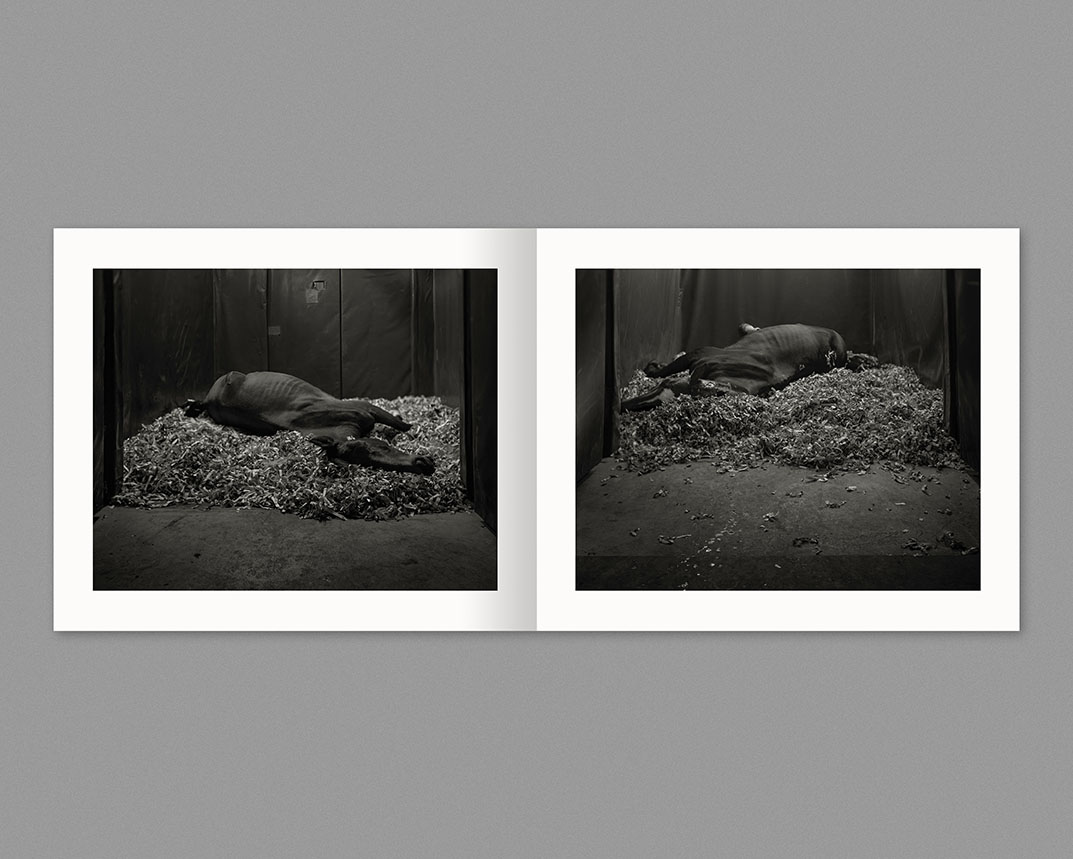 Andrea: I made different types of pictures, some of which we have discussed already, the horses, the instruments, the portrait. I also made pictures of phantoms.

Tracy: Ah yes, the phantoms. What are those? What is going on there?

Andrea: This is a side story, but do you know what phantom pain is? My mother, years ago, had her leg amputated. From this experience I learned that sometimes after an amputation, a person continues to feel both their limb and their pain, hence “phantom” pain. In making this work, I came upon a device called the “phantom”, and because of the experience of my mother, that name caught my attention. In horse breeding, this device is used for collecting sperm, quite a dramatic process. A female horse in heat is brought into the space with the phantom, where she will spray. Then she is put in a safe location behind a low wall, still in sight but out of reach, and a male horse is brought in and guided to mount the phantom. The sperm is collected and sold. It’s a big business and can include high profile clients. I made these phantom pictures primarily here in the States. I wasn’t exactly sure why I was photographing the phantoms. I thought they were beautiful and odd, I guess, and the spaces seemed strangely spiritual, which felt like a contradiction. None of this is planned out. I work quite intuitively and one thing leads to another. I have a lot of ideas about the work after it’s done, but usually when I am making the pictures, I have very few ideas about why I’m compelled to photograph. 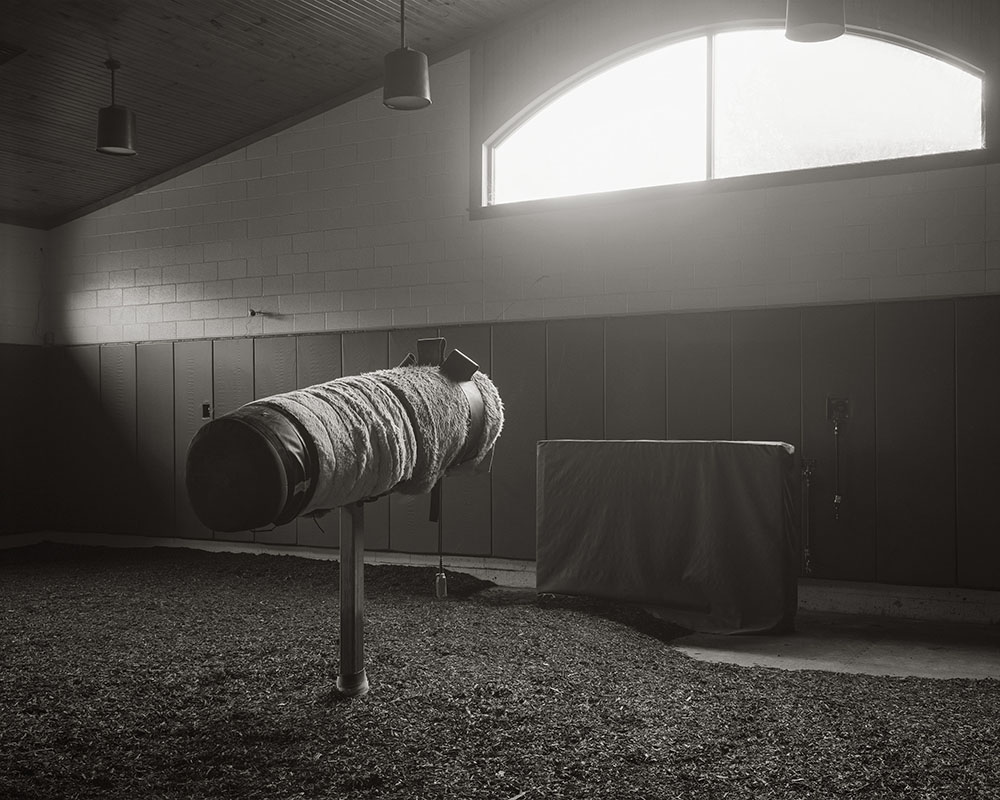 Tracy: I am sure many artists can relate. I know I can. I am always fascinated to find out that where I ended up is often far from where I intended, in the best way. I love that you followed your instinct and feel these phantom pictures add another dimension to the work. I noticed in the book there is an index of sorts, grouping these different categories of pictures together, horses, instruments, phantoms, etc.

Andrea: Yes! All displayed with their corresponding titles. There is a secret picture as well. Under the dust jacket there is a still from a video of a horse’s eye, as he is going under for surgery. As I started to mention before, I feel it is my job to collect the pictures- and in this case, also video- and I am lucky to have trusted people to work with. I made a box of prints and handed it over to TIS. And they took it from there. Similarly, it has been enlightening to work with Deborah Barkun, the curator of the exhibition at the Berman Museum of Art. 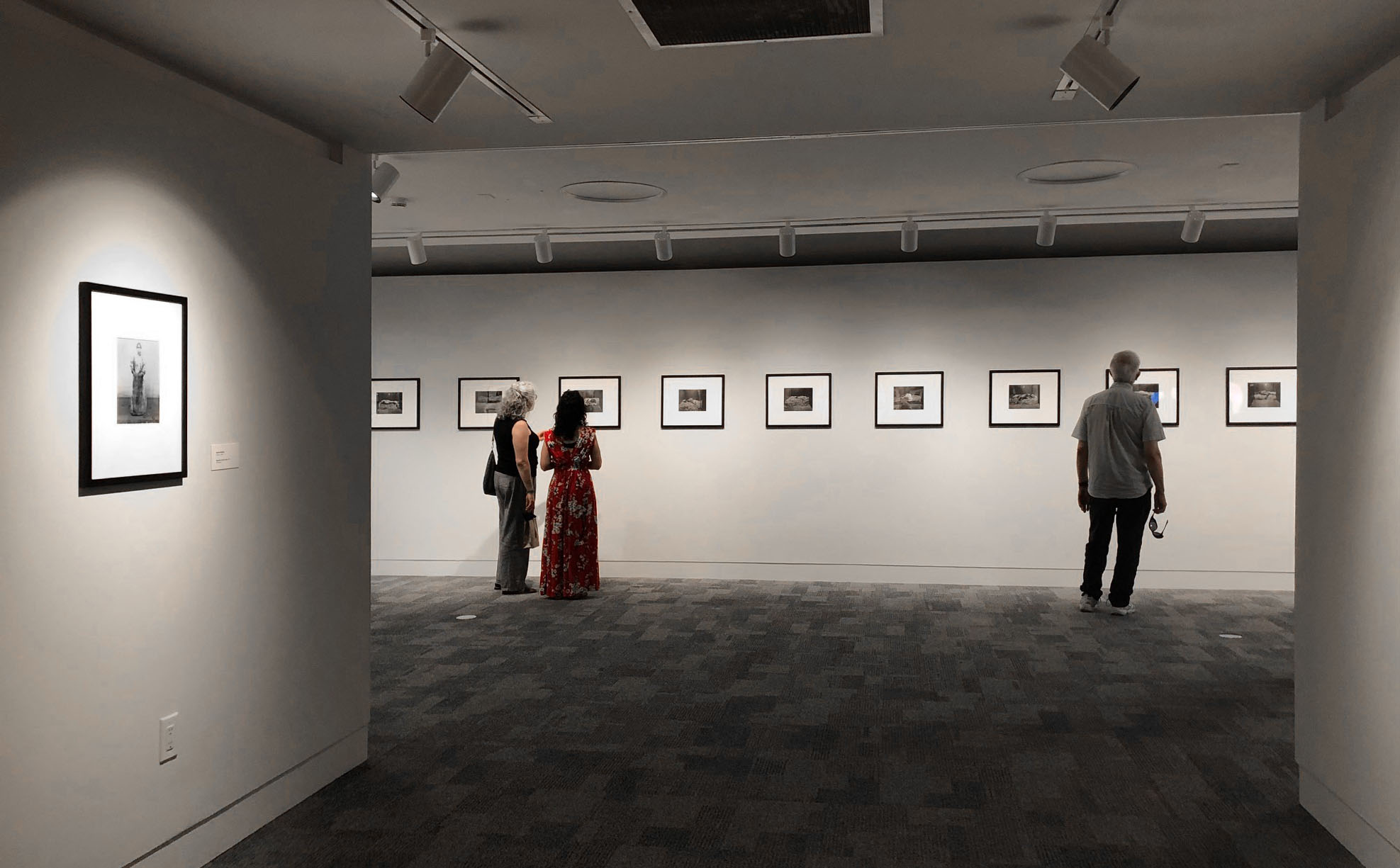 Tracy: Coinciding with the launch of this book, Theatrum Equorum is currently on exhibit through December at the Philip and Muriel Berman Museum of Art on the Ursinus College campus in Collegeville, Pennsylvania. Do you exclusively exhibit platinum palladium contact prints? Considering you are working with 8×10 negatives, are you ever tempted to make larger scale works?

Andrea: I exclusively print in platinum, though the exhibition also includes my first video. Platinum printing is what I like doing, as opposed to, say, sitting at a computer. I entered the world of photography assuming nobody would look at my stuff and that came with a sense of freedom, which continues to this day. I learned early on to do what I want, which includes being alone and on my feet in that semi dark room. That’s really important. The process. But also the product. I know we are trained to not say this, but I am really good at making platinum prints and I know it. There is joy in that. 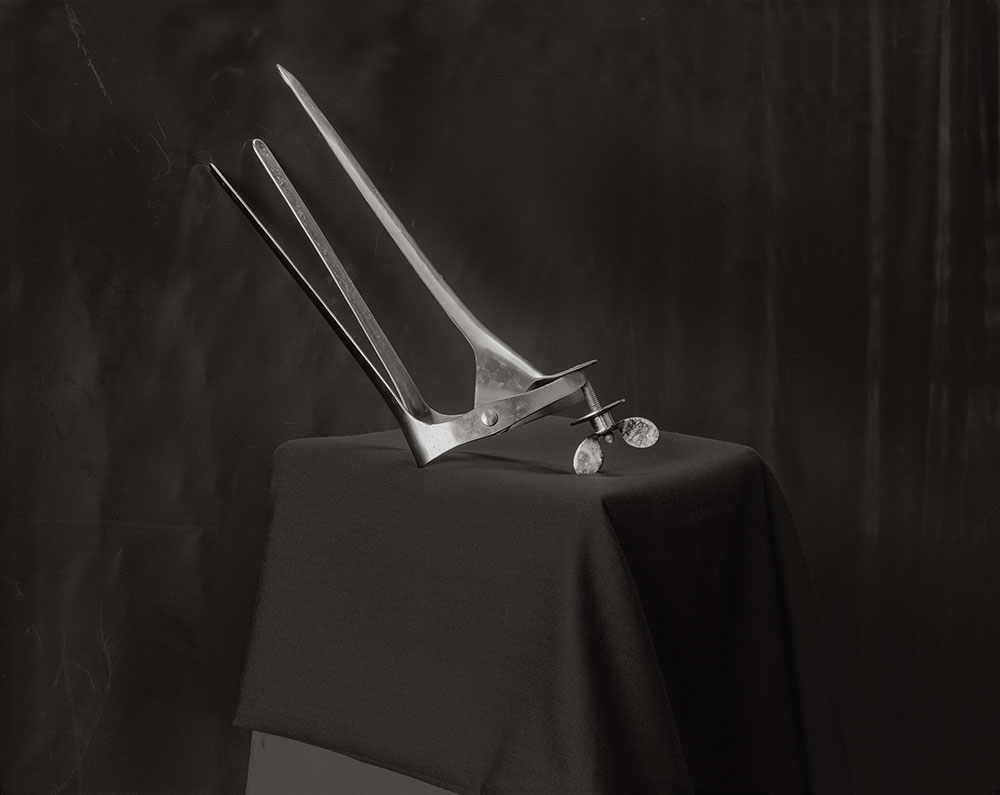 Theatrum Equorum is available for pre-order at TIS books in standard and special editions.

An exhibition of the photographs contained in Theatrum Equorum runs June 15 through December 11, 2022, at the Philip and Muriel Berman Museum of Art on the Ursinus College campus in Collegeville, Pennsylvania.

The Print Center of Philadelphia will host an evening of discussion with Andrea in conversation with Nelson Chan, co-founder of TIS Books, and Berman Museum Creative DIrector Deborah Barkun. The event will be held in-person and online on October 11th at 6pm EST.

TIS books is an independent press located in Brooklyn and Oakland publishing a variety of photobook projects from their own community to artists of international renown.

Tracy L Chandler is a photographer and contributor to Lenscratch.

Catch These Incredible “One-Hour Only” Deals (Today Only)