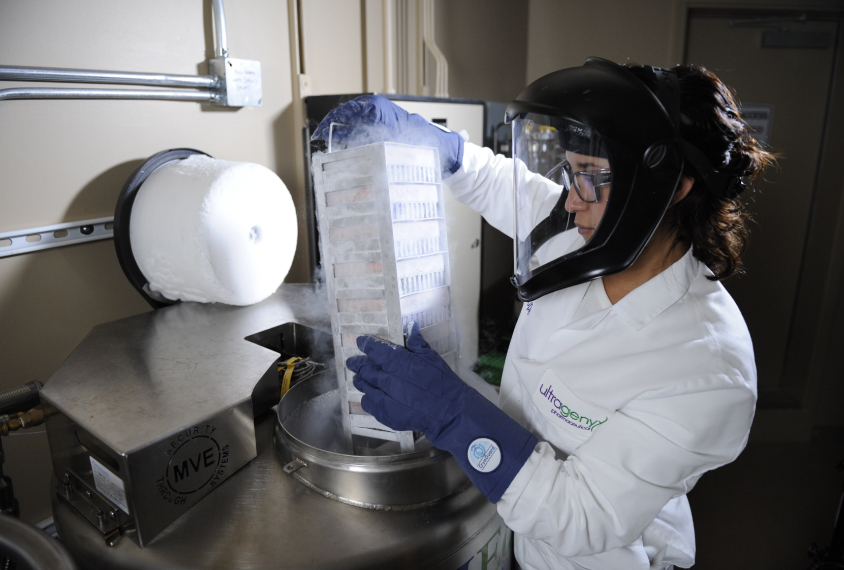 Unpaused: GeneTx and Ultragenyx reported interim results from their ongoing clinical trial of a gene therapy for Angelman syndrome.
Image courtesy of Ultragenyx

A previously paused clinical trial for an Angelman syndrome treatment appears safe and may improve some traits, according to new data presented at the Angelman Syndrome Foundation Conference in Round Rock, Texas, this week. But some researchers urge caution in interpreting the interim results further at this stage.

Angelman syndrome is a rare genetic condition caused by deletion of or mutation in the maternal copy of the gene UBE3A. Because paternal UBE3A is typically silent, dysfunction of the maternal copy results in a lack of UBE3A protein throughout the brain, which can lead to intellectual disability, seizures, difficulty with motor function and communication, and sometimes autism.

Biopharmaceutical company Ultragenyx, based in Novato, California, and Florida-based startup GeneTx, have been collaborating on the clinical trial of GTX-102, a treatment to unsilence paternal UBE3A and restore UBE3A protein levels.

In 2020 they launched a safety and efficacy trial of GTX-102 — a short stretch of RNA called an antisense oligonucleotide (ASO) — administered to the brain through a lumbar puncture. They enrolled five children with Angelman syndrome but paused the trial later that year when all participants reported some degree of leg weakness following high doses — possibly due to accumulation of the drug at the injection site.

The U.S. Food and Drug Administration (FDA) approved a relaunch of the trial in October 2021. Since then, the companies have modified their protocol and enrolled 14 new participants, 7 of whom have received cumulative doses approaching the levels that caused problems in the previous trial.

Those seven participants tolerated the treatment with no reports of leg weakness or other serious adverse events, Ultragenyx and GeneTx announced on 18 July.

Most participants in the restarted trial have also shown improvements on a number of measures, including trained clinician assessments of the children’s communication and motor skills, says Camille Bedrosian, chief medical officer and executive vice president of Ultragenyx, who presented the traits-related data on Monday along with Elizabeth Berry-Kravis, professor of pediatrics and neurological sciences at Rush University Medical Center in Chicago, Illinois, who is one of the lead clinicians on the trial.

“I’m encouraged that they’re encouraged,” says Eric Levine, professor of neuroscience at the University of Connecticut School of Medicine in Farmington, who is not involved in the trial. “It’s exciting that something’s finally in this stage of human trials. We’ve waited a long time for this. And it seems like a really good strategy.”

But some researchers are hesitant to make much of the results — partly because the trial is open label, in which parents and clinicians are aware that participants are receiving the treatment. That trial design opens up the possibility that any improvements stem from a placebo effect, they say.

“Personally, I would be very cautious to report anything else beyond safety,” says Ype Elgersma, professor of neuroscience at Erasmus University in Rotterdam, the Netherlands. Elgersma is collaborating with the pharmaceutical company Roche on its own ASO treatment for Angelman syndrome. “The placebo effect keeps on surprising us, which is the reason that studies need to be well powered to obtain the intended effect sizes on predefined outcome measures,” he says.

It is also important to manage expectations for families enrolling in clinical trials, said Ina Bruenig Traebert, global program team director at Roche, in a presentation at the conference on Tuesday. For this reason, she says, Roche does not plan to share any interim results. (A representative from Ionis, another pharmaceutical company, also presented information about its ASO treatment for the condition, which is in the early stages of a clinical trial.)

From the perspective of GeneTx and Ultragenyx, it was important to show the Angelman syndrome community that GTX-102 could be administered at lower doses without serious side effects, Berry-Kravis says. “We should use the data we have to inform a well-designed phase 3 study, and then we should do that study.”

Ultragenyx, which announced its acquisition of GeneTx in the same 18 July update, says it plans to conduct a randomized controlled trial after the ongoing safety and efficacy trial finishes. For now, the company is continuing to test how participants handle the treatment as it increases the dosage levels to those thought to be most clinically effective.