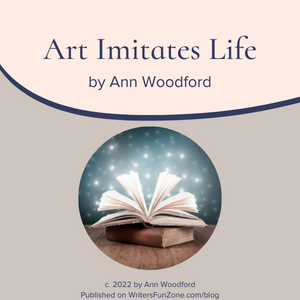 Let’s welcome back monthly columnist Ann Woodford as she shares with us: “Art Imitates Life.” Enjoy!

“We are made of stardust. We are a way for the universe to know itself.” — Carl Sagan

One of my hobbies is astronomy. I gobble up videos about planets, stars, the universe, and pretty much anything outside Earth’s atmosphere.

On Christmas day, 2021, I got up early just to watch the James Webb Telescope launch live.

As a result of my hobby — read obsession — I run into Carl Sagan, a lot.

The above quote by the “astronomer of the people” instantly lit up my brain and created a new one.

“Authors are made of readers. We are a way for humanity to know itself.” — Ann Woodford

It’s so true — it sends chills down my spine.

How many times have you heard, or been told, “You can’t write if you don’t read”?

Authors, most anyway, are first and foremost readers.

Many of us started our journey because we read something that inspired us, sparked our imagination, and set us down a path to being a writer.

For me, that happened well into my forties and started as fanfiction before I realized I could create my own worlds and characters just as easily. Almost ten years later I have one book published and I’m working on the next.

We see life reflected in the reality of the worlds we read. Or sometimes in the lack of that reality.

Sometimes, okay, many times, when I’m reading something I’m forced to look at how we connect to each other by the way different races connect in the SciFi stories I read.

Some authors see the future so clearly, it’s terrifying. Have you read The Stand by Stephen King? 1984 by George Orwell? Or Brave New World by Aldous Huxley?

Of course, none came true exactly as the author wrote them.

But they have eerie similarities to our modern world.

In the same way, authors have often used stories as a way to make us see something that’s wrong with society.

What about Lord of the Flies by William Golding? Or Fahrenheit 451 by Ray Bradbury?

In many of these cases, the commentary is political and not only reflects the authors’ feelings about the current status of the society they are living in but also where they fear we are going.

One of my favorite genres is alien romance, which invariably starts with human women being kidnapped from earth and sold into slavery. (Have no fear, they are — almost — always rescued by a gorgeous alien man who instantly falls in love with them.)

The themes I run across that are slipped in amongst the rescuing and the love really make me think.

Many reflect the unfairness of slavery and elements of racism.

Surprisingly, one of them made a comment on our human condition, asking the heroine if humanity was ready for a tool that could bring both incredible healing and great destruction in the wrong hands when humans still fought over who owned what land. (Cyborg Seduction: Interstellar Brides Program: The Colony by Grace Goodwin)

I do think certain genres lend themselves to this sort of social commentary. Science fiction and fantasy are much better tools to draw a picture of society than say regency romance or historical fiction. Those might be a little more difficult. Though it is still possible.

I believe that any work of fiction is a window into the author/creator’s worldview.

Of course, not every book you read is going to be a treatise on how awful our past was or how dystopian our future will be. And you shouldn’t feel obligated to include these themes in your work.

But chances are if you’re an author, you’re probably writing about the world around you, whether you mean to or not.

Have you ever read a story and thought, “Whoa, that hits close to home”?

Or maybe you read a story and wondered, “Is that how we’ll end up? Is that where humanity is heading?”

Do you consciously include elements of the world around us in your story as a commentary on the human condition?

Is it reflective of things that have happened or things you are afraid will happen?

Tell me about it in the comments! 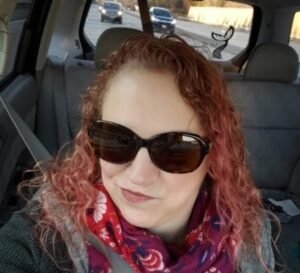 Ann Woodford is a dreamer, author, content producer, and educator as well a student of life. When she’s not dreaming up a new story she’s either finishing one or staring at the stars. She writes fiction under the pen names Willow Woodford and FJ Calliope. Her heart belongs to Blu, her chihuahua terrier who’s pretty sure he rules the world. Ann also works as an editor for the Writer’s Fun Zone and currently has one book published, Lir’s Ambition, under her pen name FJ Calliope.