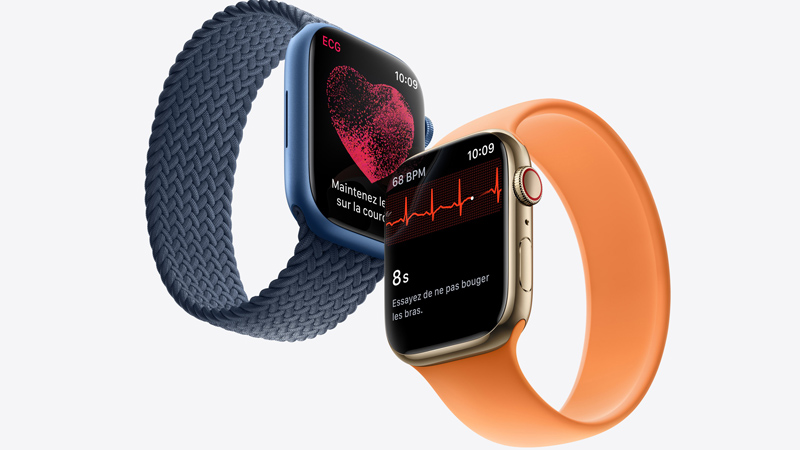 Give your gadgets a new life.

At Gadget Salvation, our mission is to contribute to the electronics reselling market as much as possible so that we extend the life of our gadgets and diminish waste. Our process is simple and seamless.

Answer a few questions and get an estimate.

Ship your gadget for free.

Get paid within two business days of our receiving your gadgets.

Overall, the design changes are minimal. However, Apple did make some subtle changes to this watch. For example, it features softer and more rounded corners. In addition, Apple Watch Series 7 has thinner borders at just 1.7mm. And, as we mentioned, the actual display is now 20% percent bigger than Apple Watch Series 6.

Apart from the size, the display has a unique refractive edge that makes full-screen watch faces and apps appear to connect seamlessly with the case’s curvature. Narrowed Apple Watch Series 7 borders also maximized the viewing area. As a result, using the new watch feels more convenient: there is more text room, and its buttons and apps are easier to tap. For example, using the maps app on the new Apple Watch Series 7 for navigation is way more comfortable now.

We could not help but spot a few new features exclusively tailored to the new watch. Apple added two custom faces to this model: the Contour and Modular Duo. The Countour has a beautiful interface and customizable fonts. Overall, it is very minimal. The Modular Duo, on the other hand, looks much more “complicated”. You can choose what apps to display as well.

Apple also added a fully QWERTY keyboard for the Watch Series 7. It can be tapped or swiped with QuickPath, allowing users to slide a finger to type. And the AI allows you to select the words you want to replace. In addition, the auto-predict is pretty decent, speeding up the typing process a little bit.

The Most Durable Apple Watch Yet

This new watch is the most durable yet, according to Apple’s CEO, Tim Cook. It is a much thicker glass cover, making the watch a little more crack-resistant. Besides, this is the first Apple smartwatch to have IP6X certification, which means it is also resistant to dust. And, of course, it maintains the WR50 water resistance rating as well. As a result, it should be safe to play most sports while wearing this watch, or even take it to a beach on a sunny day.

Fast charging must be the most impressive added feature. The new smartwatch now charges 33% faster than previous models. Apple achieved that thanks to the new charging architecture technology and the Magnetic Fast Charging USB-C Cable.

So, the battery life technically remains the same: you get about a day and a half out of your Apple Watch Series 7 on a single charge. However, recharging your watch becomes a little less annoying.

The new Apple Watch Series 7 pricing starts at $399. And, as always, you have two sizes available: the 41mm and 45mm versions.

In addition, you can choose from a wide range of aluminum case finishes (like Midnight, Green, Blue, and (Product)RED), band material, and collections.

Both 41mm and 45mm versions come in LTE and non-LTE variations.

The most expensive watch from the Hermes collection will cost you $1299.

Since the Apple Watch Series 7 is basically hot from the oven, we do not have a resale value for it as of yet. But if you are looking to trade-in or resell the older model, here are a few examples for you:

We should that, unlike other Apple gadgets, watches, while being pretty expensive, depreciate at a much higher rate.

So, the newest Apple Watch Series 7 sport a more refined design, paired with enhanced durability and a bigger screen. Plus, they also charge faster and offer improved AI technology. Is it the best watch money can buy today? It sure is, and we won’t argue that. But do those small changes justify an upgrade? Again, we would wait for the next watch to come out.

And meanwhile, if you look to score a few extra dollars, consider a smartwatch trade-in with us. We guarantee fair prices and fast payouts through Venmo, PayPal, Zelle, or by check.

Give your gadgets a new life

At Gadget Salvation, our mission is to contribute to the electronics reselling market as much as possible so that we extend the life of our gadgets and diminish waste. Our process is simple and seamless.

Answer a few questions and get an estimate.

Ship your gadget for free.

Get paid within two business days of our receiving your gadget.