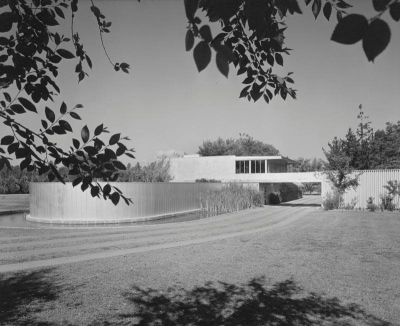 The Austrian-born architect Richard Neutra, whom I write about in this week’s issue of The New Yorker, arrived in Los Angeles well before the great wave of émigrés who fled Hitler’s takeover in Germany and the subsequent Nazi invasions of Europe. He established himself in the city in 1925 and became an American citizen in 1929. Although he was Jewish, he seems not to have identified strongly with the sufferings of Jews back in Austria and Germany. The author Lawrence Weschler — who, as the grandson of the composer Ernst Toch, grew up in the émigré milieu — asked Dione Neutra about this in an interview for the UCLA Oral History Program: “Some people who were nominally Jewish became much more Jewish as a result of the Nazis coming to power . . . Was there anything like that going on with your husband?” Dione answered: “No, he was so overwhelmed through his, you know, trying to make a living, trying to keep his head above water, that I don’t think that he was very aware of it.” In this respect, Neutra was very different from Arnold Schoenberg, another Viennese native, who arrived in Los Angeles in 1934. Schoenberg re-converted in Judaism, removing the umlaut from his name in the process, and embraced Zionist politics. He had been fiercely prescient about the rise of anti-Semitism in Austria and concluded at a quite early date that Hitler was planning a Jewish genocide.

Given that disparity, it’s perhaps not surprising that no strong connection existed between Neutra and Schoenberg. Nonetheless, there were several interesting links between the two. Neutra may have encountered Schoenberg in childhood; according to the historian Thomas S. Hines, his brothers made music with the composer and his pupils. Then, in March 1913, Neutra attended the famous “scandal concert” at the Musikverein, perhaps the most violent event in the early history of musical modernism. Hines quotes a fascinating description of the event from Neutra’s diary — a source I’ve seldom seen cited in the Schoenberg literature. It reads:

Right at the beginning, a few people began to bawl and scream, there was talking and yelling and knocking about. The rabble just had the feeling that there was someone to  butcher in a cheap manner, someone there for the taking. It was . . . shocking to witness . . . At times I thought I would jump out of my skin. After the Schönberg symphony [the Chamber Symphony No. 1], which despite everything made an impression of power and of an artwork on me, a hellish racket broke out. In the second gallery, a few people were thrown out after hard scuffles. Berg’s ‘Lieder’ were interrupted by roaring [and] neighing. Earlier [Adolf] Loos had almost engaged in acts of violence. Schönberg screamed threats into the auditorium. The ‘Lieder’ were completed. Then all limits broke. People challenged each other, were torn apart, screamed, laughed, howled. Arthur Schnitzler sat across from me in the second box. Someone yelled to the audience to behave in a civilized manner or leave. Someone yelled back ‘rascal.’ The former jumped down into the crowd, slapped the supposed man who had insulted him in the face. The whole assembly followed these acts anxiously. Then some more shouting. A uniformed commissioner screaming something . . . my whole body trembled out of rage. The musicians left the hall. The mob had succeeded in breaking up the concert.

Neutra appears to have witnessed the altercation between the writer Erhard Buschbeck and a doctor-composer named Viktor Albert, which led to a court case. Indeed, various witnesses reported that Adler had hurled the epithet “Lausbuben” at Bruschbeck, making the latter feel compelled to strike back.

When Schoenberg came to LA, he contemplating commissioning a house from Neutra. A 1936 letter in the Schoenberg archive, to the Viennese architect Heinrich Kulka, reports:

I will probably have the opportunity to build myself a house here, and you will understand how it pains me that Loos is longer alive, or that I cannot ask one of his pupils, such as you, to build. I would nonetheless like to obtain a modern house and to that end I am in contact with two modern architects. One is an American, but the other is Richard Neutra, who comes from Vienna and whom you probably know. He is evidently also from the Loos circle and makes very lovely houses, even if he is consciously a little more doctrinaire than Loos, and not uninfluenced by Bauhaus principles. Still, he has, as ever, Viennese taste and knows what a creator needs.

Nothing came of that scheme. Schoenberg ended up settling in a roomy Spanish Colonial house on North Rockingham Avenue, where he remained until his death.

Neutra would undoubtedly have been delighted to take on a Schoenberg commission. Even more gratifying would have been the plum assignment of designing a house for Thomas Mann, the emperor of the emigration. In 1938, in advance of Mann’s move to Los Angeles, Neutra took the great author on a driving tour of modernist houses, possibly including the Sternberg House and the Lovell Health House. Mann reacted negatively in his diary: “Kubischer Glaskasten-Stil, unpleasant.” Later, there are stories that Neutra pursued Mann so avidly that the latter became exasperated. Dione Neutra reports an incident at the house of the bestselling author Vicki Baum: “My husband cornered Thomas Mann and talked to him for at least a half an hour, and finally Vicki Baum sent somebody and said, ‘For heaven’s sake, get that Neutra off Thomas Mann’s back. There are other people who want to talk to him, too.’ And we were never invited again.” The émigré architect J. R. Davidson built Mann’s house instead — a sleek but in no way cubistic structure that now belongs to the German government. Nonetheless, some friendly contact remained; in 1949, Mann went to a gathering at the Neutra VDL House in Silver Lake, and in 1954, after he had returned to Switzerland, we find him reading an unidentified manuscript by Neutra — mostly likely Survival through Design, published that year.

I have the sense, reading anecdotes like the Vicki Baum story, that the élite émigrés found Neutra uncouth, vulgar, perhaps prematurely “Americanized.” One can’t discount the possibility that a strain of anti-Semitism affected his reputation: portraits of him as pushy, grasping, overambitious, etc., smack a bit too much of Jewish stereotypes. Consider the standard contrast that is made between Neutra and Rudolph Schindler: the one commercially oriented, fame-obsessed, the other a “pure” artist interested only in the pursuit of his art. Of course, Neutra undeniably possessed character traits that rubbed people the wrong way and did create a fair degree of resentment among colleagues. But accounts of him tend too much toward caricature. He was, like so many artists of his calibre, an acutely complex, contradictory individual.

As for Schindler and Schoenberg, I haven’t seen any traces of a link so far, but I wouldn’t be surprised if at some point or another Schoenberg had shown up at the famous bohemian house on Kings Road. He did go to a musical evening at the Silver Lake home of the critic Peter Yates, the founder of what became Monday Evening Concerts. That event took place in a roomy upstairs studio that Schindler had added to the extant structure. The house remains in artistic hands: it is occupied by the filmmaker and critic Thom Andersen, who created the astonishing documentary Los Angeles Plays Itself. If anyone could put the whole complicated story of Neutra and Schindler on film, it would surely be he….