It was an emotional day even before the 2021 Dance Canvas Summer Artist Residency performance began at Atlanta Contemporary’s outdoor pavilion Saturday evening. News media had been covering the 20th anniversary of 9/11 all day and partway through the performance three military planes roared overhead (a memorial flyover?)

It was hard not to think of 9/11 in Kerri Garrett’s “The Shadows Whispered Secrets,” the first work on the program. The two dancers, one in white and one in black, walked onto the concrete floor of the space, brushing imaginary dust from their clothes, then dipping into repeated, deep knee bends and stomach rolls before standing, looking up and reaching their arms and fluttering hands skyward.

And when they screamed, when they fell to the ground, when a voice in the score said, “Let the dust settle” and “breathe” and “pray,” when we looked at the blood-red cloth hung over the steel rafters, and the black cloth stretched across the space at the back — well, it was hard not to feel saturated by grief. Garrett’s intent, according to the program, was to address the grief and horror of forced migration and ongoing oppression, not 9/11; the emotion worked either way. 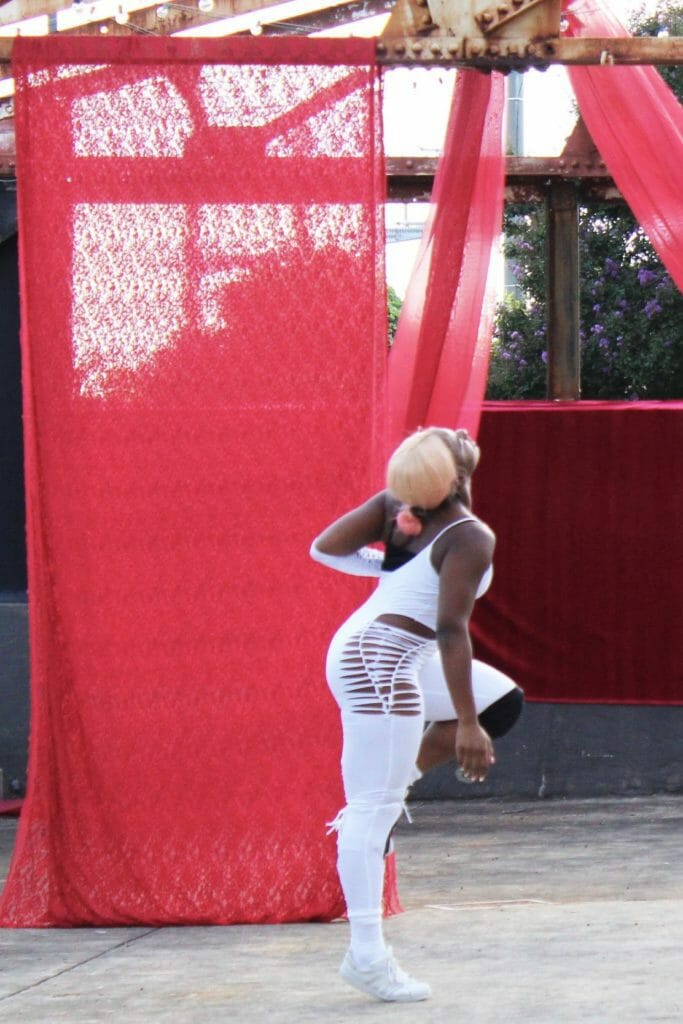 Like the evening’s other four works, “The Shadows” shifted moods. Hand flutters closer to the body became expressions of fear — the two women crouched and held one another, offering comfort. Then to the sound of African drumming, they shifted gears again to up-tempo African and jazz inflected vocabulary, discovering joy.

These contemporary dance works — a rich journey from grief to joy — were created during Dance Canvas’ eight-week summer residency. (The museum provided the rehearsal space.) Early in the evening, two trains groaned and clanked by on the nearby railroad tracks, an appropriate sound for the theme that Angela Harris, Dance Canvas executive artistic director, had given the choreographers — migration.

Kae Kristina’s “Untold” was inspired by the 1906 Atlanta race riots in which many Blacks were brutally murdered. The duet began with two dancers performing vaudeville-style to a Scott Joplin rag — an early minstrel show? A vaudeville veneer covering anger, fear, grief, oppression? As the sound score described, a White mob attacked the Black community on September 22, 1906. The most powerful moment was when the dancers each picked up a lantern and a small noose, and with backs to the audience, dropped their heads to one side, later kneeling together in a long, searing silence. Least effective were the sections when they danced facing the sides of the space. Without visual or movement connection with the audience, the power of the choreography was lost.

Porter Grubbs, a queer man (they/their), chose migration back to Grubbs’ native Alabama as the theme of the solo “Red Dirt Junction.” Grubbs ran around the space holding a ball of white tulle that finally unfurled and wrapped around their head and face, before changing from black pants and top to blue denim overalls — their Alabama identity — and moving sweetly, fluidly and lyrically to bluegrass music. It felt as if coming home to Alabama in this work gave Grubbs permission to come home to their own identity.

Shawny Evans/Humlao (they/their) began their work with a haunting Micronesian chant calling for peace, joy, love. (Evans/Humlao unexpectedly performed because one of the dancers was ill with Covid.) “Ta’hasso I Tinituhon” was inspired by the Micronesian creation story. Most of the action for the trio, who wore bold black, white and brown tunics over red sashes, took place at the back of the space. 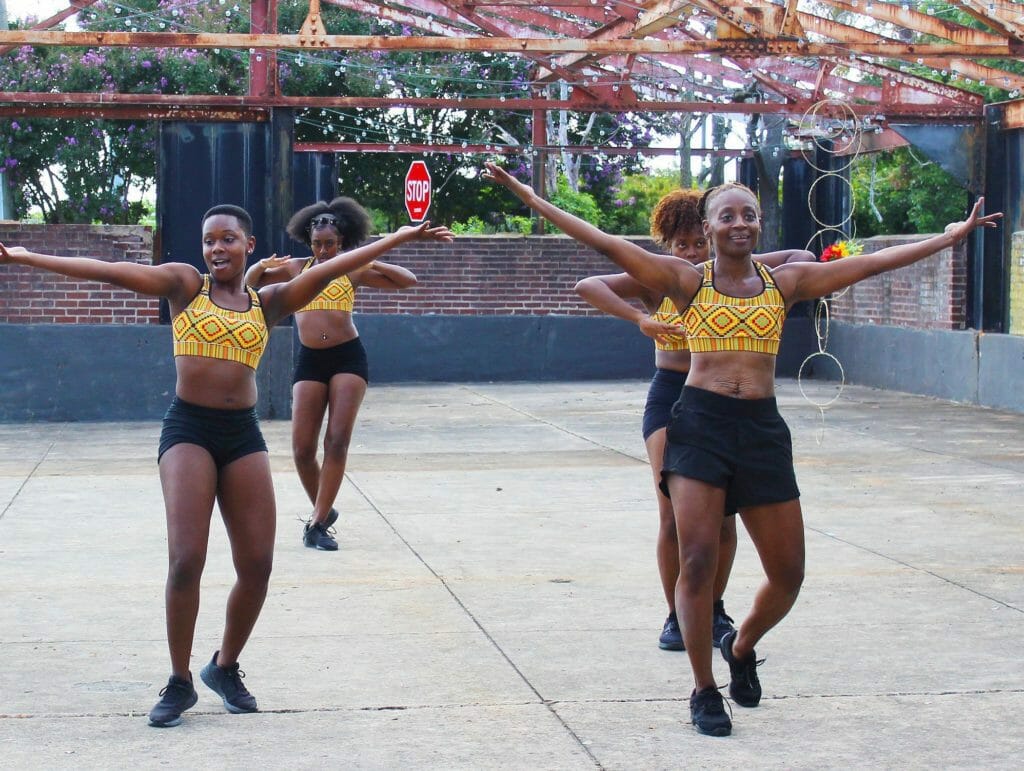 Childs’ “Tokoliana” provided an exuberant, high-energy finale to the evening.

The slow meditative pace and thoughtful vocabulary made good use of the walls, the three dancers collapsing against them as if lacking strength to stand (was this creation emerging from the earth?) Their physical distance from the audience, however, created unfortunate emotional distance until finally they migrated to the front of the stage, fully present, fully created. An effective repeated gesture was one arm stretched forward, the index finger pointing. It brought to mind a similar gesture in Michelangelo’s famous Sistine Chapel painting of God creating Adam, the Christian creation story. Perhaps there is a lesson here of connection within cultural difference.

Indya Childs’ “Tokoliana” completed the evening with almost nonstop exuberance – kicks, bends, jumps, grounded African-inspired dance that flew into jazz and back again, expressing “the hope and ancestral connection infused in the Black community.” Childs described her dancers as spiritual engines, and they were indeed spectacular engines of energy, especially Charray Helton. Tall, powerful, flexible, her body exploded into movement, encouraging others to meet her there. When five of the six dancers lay down in a line, their stillness had its own energy, coming as it did after such intense movement. How beautiful to end the evening on this joyful note. Another train rumbled loudly by, but there had been too much creativity and emotional richness for the noise – and the train’s slow migration — to bother us anymore.