Different times called for revamped strategies and that’s the case with Expedia Group in terms of its approach to paid marketing on Google.

A new Bernstein report found that in the first quarter of 2021, Expedia Group attracted three times more traffic from paid search on U.S. desktops than Booking.com, Airbnb, and Tripadvisor combined. Expedia.com attracted 1 million more visits from paid search in March 2021 than it did in pre-pandemic March 2019.

Expedia Is a Big Spender in Paid Search 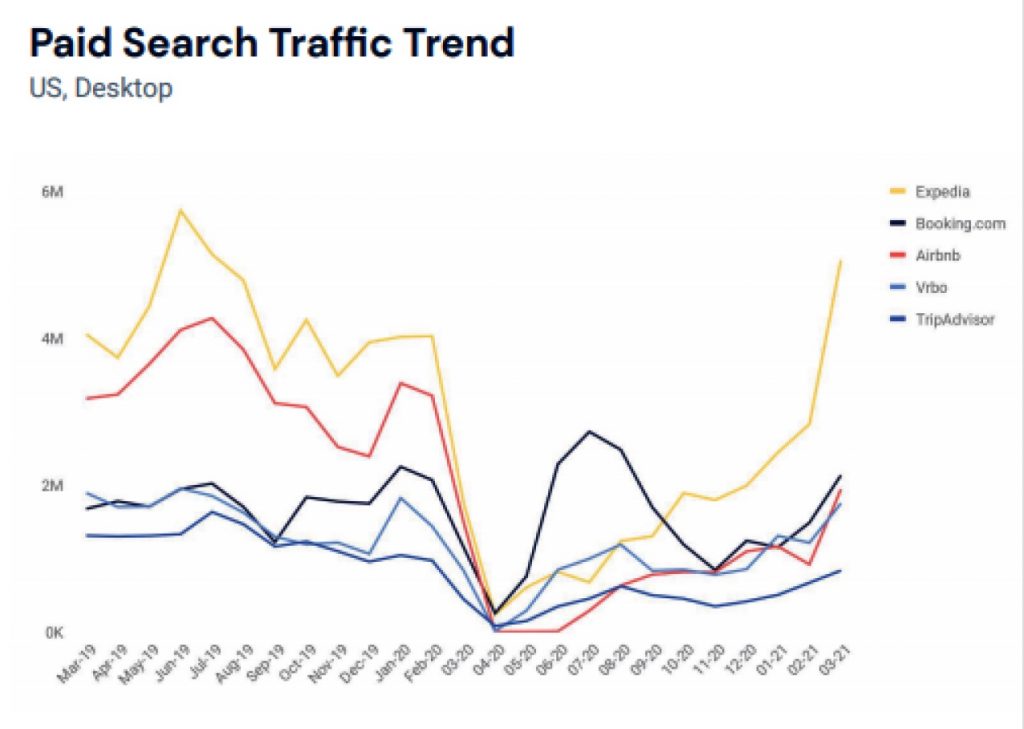 Join Us at Skift Global Forum in NYC September 21-23 and hear the CEOs of Expedia Group, Booking Holdings, and Airbnb

You may recall that weeks before Expedia Group ousted then-CEO Mark Okerstrom, he lamented the fact that the company was overly reliant on paid marketing through Google, which he characterized as Expedia’s biggest competitor. Current CEO Peter Kern likewise stated his goal would be to reduce Expedia’s Google dependence.

Expedia Group Favored Brand Advertising for Vrbo Rather Than Expedia.com But then came the pandemic, which saw Expedia Group pouring lots of money into TV ads and video for Vrbo, which gained market share during the pandemic as drive-to vacations away from heavily populated urban areas became a trend. Vrbo generated 2.1 million display ad visits during then first three months of 2021 — double that of sister company Expedia.com, Tripadvisor, Booking.com, and Airbnb combined, according to the Bernstein report. The research report focused on online travel agencies in 2025.

Kern of Expedia said a few weeks ago that the company opportunistically focused on markets such as the U.S. for Vrbo because that is where it saw the largest upside.

While diminishing a company’s dependence on gaining an audience by paying Google for advertising makes a ton of sense during certain periods, a nimble company can and should change direction under altered circumstances. Still, Expedia certainly has a long-term goal of trying to get customers to come directly to its websites without having to pay Google for the privilege.

One irony of Expedia’s surge in paid marketing is that Airbnb in 2019 came under a lot of criticism for upping its paid marketing, and there were a lot of questions about whether Airbnb could sustain its momentum just on the strength of its own brand, or would have to bow to Google’s importance.

However, few are taking Expedia to task for leaning into paid marketing — and it has used Google and video marketing to make gains.