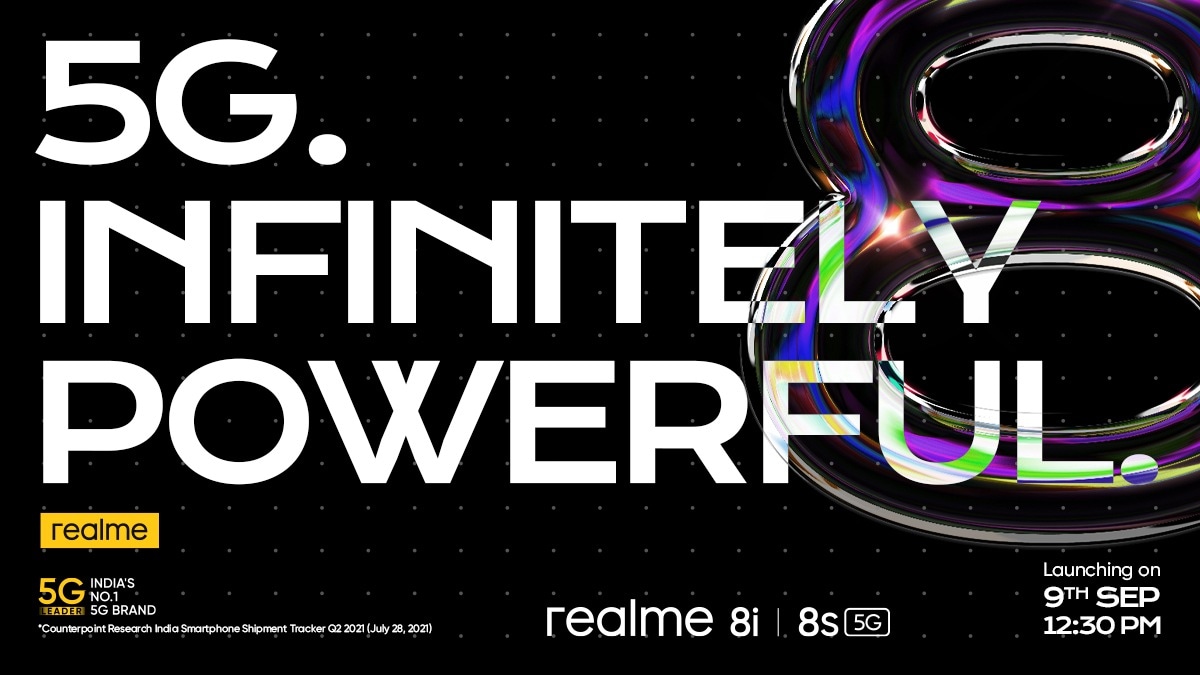 Realme 8i and Realme 8s 5G launch in India is scheduled for September 9, the Chinese company announced on Thursday. Both new Realme phones will sit alongside the existing Realme 8, Realme 8 Pro, and Realme 8 5G that were launched in India earlier this year. Last month, Realme India and Europe CEO Madhav Sheth confirmed the plans to bring Realme 8i and Realme 8s to India. The rumour mill has also suggested some of the key specifications of both smartphones ahead of their formal arrival.

To mark the launch of Realme 8i and Realme 8s 5G in India, Realme is hosting a virtual event that will take place at 12:30pm IST on September 9. The company revealed the launch schedule of the smartphones through a media invite. It also announced the Realme 8s 5G launch date through its social media channels. Additionally, Realme confirmed that Realme 8s 5G will be powered by the newly launched MediaTek Dimensity 810 SoC.

Earlier this week, tweets exchanged between Realme and MediaTek confirmed that the Realme 8i will come with an octa-core MediaTek Helio G96 SoC that was unveiled in July and comes with 4G LTE support. The phone is also tipped to have a 6.59-inch full-HD+ display with a 120Hz refresh rate and come with at least 4GB of RAM and 128GB of onboard storage. Further, you can expect triple rear cameras with a 50-megapixel primary sensor, a 16-megapixel selfie camera at the front, and a 5,000mAh battery.

Some of the leaked renders of Realme 8i also suggested that it would come with a 3.5mm headphone jack, a USB Type-C port, and a side-mounted fingerprint sensor. Moreover, Realme 8i is said to be 8.6mm thick and weigh 194 grams.

Unlike Realme 8i, Realme 8s 5G will be powered by the octa-core MediaTek Dimensity 810 SoC, as confirmed by the company on social media. The chipset comes with 5G connectivity and is designed as an upgrade to the existing Dimensity 800. If we look at past reports based on leaks, Realme 8s 5G is expected to have a 6.5-inch display with 90Hz refresh rate and include 6GB as well as 8GB RAM options. It would also come with an additional 5GB virtual RAM support that may essentially use the internal storage to boost multitasking.

Realme 8s 5G is also said to have a triple rear camera setup with a 64-megapixel primary sensor and a 16-megapixel selfie camera. Furthermore, the phone may come in 128GB and 256GB storage options and include a 5,000mAh battery with 33W DartCharge fast charging support.