MediaTek, which took the lead in the smartphone application processor (AP) market from Qualcomm in the third quarter of last year, has held it for the fourth quarter in a row. Analysts at Counterpointresearch concluded that the Taiwanese chipmaker continues to lead the mobile chip market, with a 38% share in the second quarter of 2021.

Experts note that the Dimensity 700 chip dominated in the segment of 5G devices, while the Helio P35 and Helio G80 processors became the leaders in the 4G LTE niche. The second quarter of this year was one of the most successful for MediaTek, which has been showing constant growth since the first quarter of 2021.

In second place was Qualcomm, which controls 32% of the market for application processors (AP) for smartphones. It increased its share compared to the first quarter of this year; not least due to the decrease in the share of HiSilicon, Samsung and Apple.

Apple also got into the top three, its share is estimated at 15%, which is 2% more than a year earlier, but also 2% less than in the first quarter of 2021. Not only HiSilicon, whose share is decreasing due to US sanctions, but also Samsung. The South Korean giant’s presence in the chip market has been steadily declining for the sixth consecutive quarter.

If at the end of the first quarter of 2020 its share was 14%, then in the second quarter of this year it decreased by half, amounting to only 7%. Samsung has begun to actively invest in foundry and has set itself the goal of becoming the largest chipmaker on the market by 2030. At the moment, its plan is failing miserably.

Unicos’s position in the market is stable and its share is estimated at 5%, as in the previous year. HiSilicon continues its downward trend and at the end of the second quarter of 2021 its share was 3%; whereas a year ago this figure was five times higher. 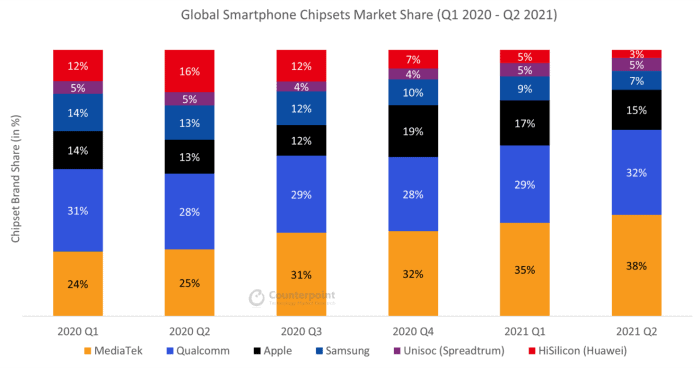 MediaTek is heading towards 4nm with flagship Dimensity 2000 SoC

Earlier, MediaTek chipsets attracted with their low price. The Taiwanese chip maker deliberately went to this in order to reduce the price tag as much as possible; while Qualcomm relied on performance. As a result, MediaTek products often found a place in budget devices from small manufacturers.

The next place to fight is the flagship segment. It is in this niche that MediaTek is poised to challenge Qualcomm. And it will make it with the release of the Dimensity 2000 chip. According to rumors, it is created using the advanced ARM v9 architecture and a 4-nanometer process technology from TSMC. Rumor has it that in terms of performance and energy efficiency, it should come close to the Snapdragon 898; and in some parameters, it will even surely bypass it