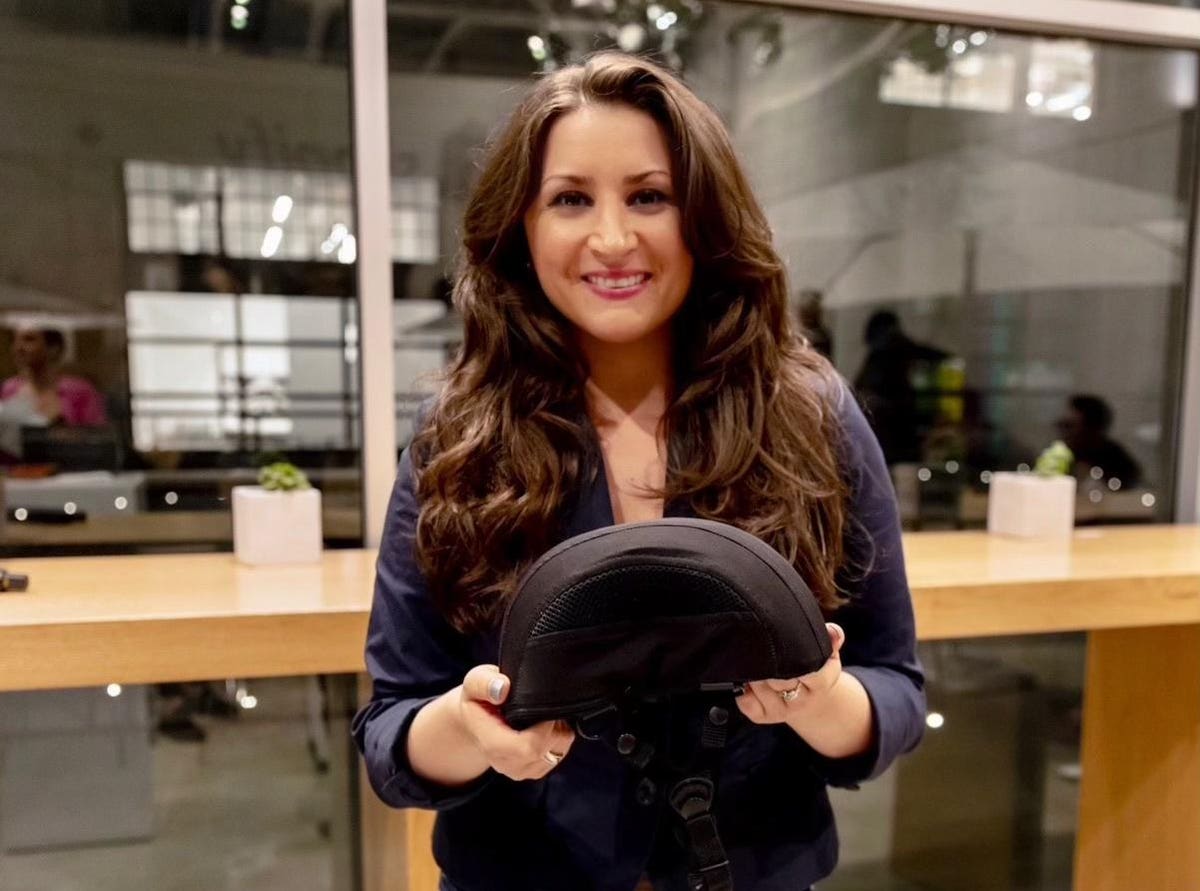 Two years ago, when Forbes held its Under 30 Summit in Detroit, Rachel Benyola, founder of Kova by AnneeLondon, demoed her bike helmet which folded like origami. She bounded on to the stage wearing it, and took it off to demonstrate how the design – still being tested – worked. She was a surprise hit of the Manufacturing stage. “I remember everyone clapping for me when I said I was going to build it in the United States,” she recalls.

But entrepreneurship isn’t easy, and Benyola, now 33, shuttered her company last year, selling off the parts she could, after struggling to raise funds and keep it going during the pandemic. The decision, she says now, was painful, but crucial for her own mental health. She decided to share her own story because she believes it could help other founders facing similar struggles.

“There is a toxic positivity of startup culture. People say, ‘Don’t give up, keep it going.’ It became kind of dangerous.”

Back in 2016, Benyola, who has a bachelor’s degree from Rutgers, was motivated to start the Philadelphia-based company by seeing friends who refused to wear helmets due to their bulk and inconvenience. Benyola, an avid biker herself, had been in accidents. One friend was blinded in an eye.

The design for the helmet, which she called Kova, was packable and convenient. It contoured to the head with hinges, and folded down, origami-style. Benyola filed a patent for it, and raised roughly $500,000 in seed funding from investors. The design was beautiful, and she garnered attention, landing on our radar in 2017 for the 2018 Forbes 30 Under 30 list.

But making a new bike helmet is hard. It needs to be certified to be safe in all weather conditions, and then produced at scale. She put everything she had into the company, loading up her credit cards with debt and even selling off personal items to raise cash. By the time she made the cut for the 2018 Forbes 30 Under 30 list in Manufacturing, she was seriously struggling. “The day I got a letter that I got on the Forbes Under 30 list was the same day I was approved for food stamps,” she recalls. “I was really excited about both.”

In winter 2019, she started pitching investors in New York, Los Angeles, San Francisco and Portland. She says a few (who she declines to name) were interested, but they got cold feet when the pandemic hit in the spring. “In two weeks, I got phone calls or emails from these investment funds saying, ‘It’s nothing personal, but we’re going to hold off investing in anything new for the foreseeable future,’” she says. “I was super discouraged, but was like, ‘Let’s figure out what we can do.’”

Then in late March, she started to feel sick. Soon, she and her boyfriend (now husband) were diagnosed with Covid-19. “During those months I was at home, I had to face the thing I didn’t want to face: Is this something I want to keep doing, this uphill battle of bringing this product to market? It was such a hard decision and choice to come to terms with,” she says.

Months passed as she recovered from illness and came to terms with her decision. She gardened to stay calm, but the stress of not having funds or health insurance weighed heavily. “Stressful doesn’t describe it adequately. I was going to startup events, and one guy told me he was living in his car and another guy said he was living in the utility closet of his friend’s office.” she says. “Everyone is in debt, but publicly we are expected to be so charismatic, super-positive, portraying success. There is a toxic positivity of startup culture. People say, ‘Don’t give up, keep it going.’ It became kind of dangerous.”

By summer she was done, and spoke with her investors about the decision. She says she cried when they told her they’d invest with her again. She dissolved the corporate entity, and sold off the assets she could to different manufacturing partners. The cash helped cover some of the debts, and pay some expenses. But she also learned that her patent had gone into an abandoned state because of not keeping current on filings due to lack of cash. In an email to supporters this spring, she told them there’d be no refunds for pre-orders. “The payment has gone towards the extensive research and development of the helmet,” she wrote. “I want to thank you from the bottom of my heart for your support.”

What’s next? Benyola, who has a master’s degree in clinical psychology from Chestnut Hill College, is now doing executive coaching, working with individuals and startups, and helping them learn from her experience. “I do enjoy working with different startups, and I’ve been talking with some venture funds and incubators about how we can build in these wellness audits,” she says. “I’m starting to come out of my shell.”