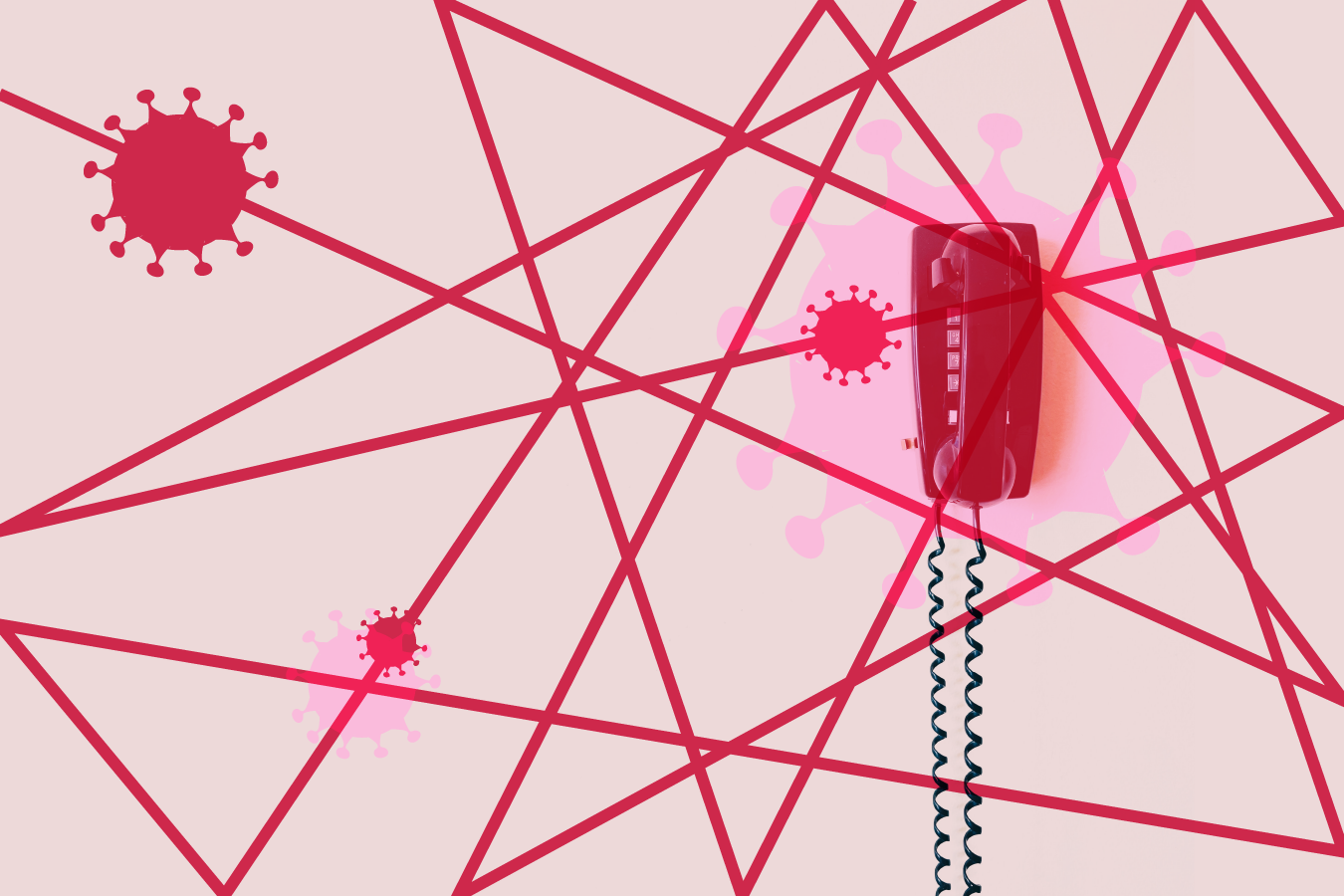 Now state and local health departments are trying to build back operations with depleted resources, as covid fatigue among their workers and the public alike complicate those efforts.

“Contact tracing from the start of this pandemic provided us with really kind of invaluable information,” said Dr. Amanda Castel, a professor of epidemiology at George Washington University. Castel said it’s still “a fundamental part of our response.” As is covid testing, especially for those who are vulnerable or unvaccinated, such as children under age 12. Yet numerous departments now find themselves with fewer contact tracers and less robust programs. Like testing, contact tracing seems to have fallen by the wayside.

Contact tracing is a resource-intensive operation, requiring workers to quickly call people who test positive for a disease and offer medical advice, and then to identify and reach out to anyone with whom the infected people came in close contact. The hope during the pandemic is to prevent spread of the covid virus, and to observe how the virus is changing. The process has been used for decades by public health officials to stop disease transmission.

But many public health departments were overwhelmed by the onslaught of covid. Last winter — before vaccines provided relief — they were unable to stay ahead of the virus through contact tracing. And as case counts dropped by virtue of increased vaccination rates in the spring and early summer, more than a dozen state health departments scaled back the workforce, said Crystal Watson, a senior scholar and assistant professor at the Johns Hopkins Center for Health Security. The resources were needed for vaccination initiatives and to restart other public health programs.

The situation has grown critical in a number of states during the past month or so as local health officials find themselves once again behind the curve as the delta variant drives up case counts. Resources are already stretched, and the politicization of covid-19 has left these local officials making tough calls regarding whom to trace in places like Missouri and Texas. And some states just don’t have enough personnel to do the job. The army of disease detectives more often than not included temporary staff or civil servants from outside the health department. In Kentucky, the former contact-tracing director is now the aviation department commissioner. The state health department said he has a successor but declined to name them.

The highly contagious delta variant makes the job harder. Cases can stack up quickly. Public health departments, which are chronically understaffed and underfunded, must pick and choose which tools will serve them the best.

“Some places have done a good job at retaining a kind of reserve workforce that they could call back up. And I’m sure that’s coming in handy right now. Other places did not. And they’re probably going to be quickly overwhelmed,” Watson said. “It’s also hard to say because there’s not a lot of public reporting.”

Arkansas, where Republican Gov. Asa Hutchison now says it was an error to sign a law in April banning mask mandates, is averaging around 2,000 new cases a day, one of the steepest upsurges among states. But the state health department has significantly fewer contact tracers now — 192 compared with 840 in December, when case counts were at the same level, according to the department and data collected by Johns Hopkins.

Danyelle McNeill, an Arkansas health department public information officer, said contractors performing this work have been authorized to increase their staff size. She also said that the agency is triaging cases, prioritizing those who tested positive for or were diagnosed with covid within six days of specimen collection or symptom onset, which the Centers for Disease Control and Prevention has recommended when capacity is limited, and that its vendors are not calling all positive cases the same day they receive lists when infections near 2,000.

In states that have opted to downplay contact tracing, county and city health officials are left to fend for themselves. In hard-hit southwestern Missouri, the flood of cases has overwhelmed a staff already stretched thin, said Springfield-Greene County Health Department Director Katie Towns, so the department pivoted to conducting contact tracing only in cases involving children younger than 12, who aren’t eligible for vaccination, Towns said.

Lisa Cox, a spokesperson for the state health department, said that “local health departments will work to triage and prioritize case investigations and will work with them if assistance is needed.” Her department expects financial support through the federal American Rescue Plan, but funds have yet to be appropriated. Ultimately, local strategies will come down to priorities. “We’ve made it clear that local jurisdictions need to make decisions locally based on their unique situation.”

The Springfield-Greene County Health Department’s surge capacity has diminished as team members have been redeployed to other health programs, which had been neglected during the pandemic. But even if Towns had unlimited resources, she said, she questions how effective investing it all in contact tracing would be: Covid is rampant and compliance with public health measures has waned. She would likely deploy more people to perform vaccine outreach and distribution.

Kelley Vollmar, executive director of the Jefferson County Health Department in eastern Missouri, said the delta surge is hitting a community polarized against public health efforts. “You have a public who is really not supportive of contact tracing and quarantine, as well as the funding for contact tracing and infrastructure is not there like it was last year,” she said.

In Texas, the Department of State Health Services is “winding down” the contact-tracing program to meet the requirements of the budget. In the new budget, which takes effect Sept. 1, taxpayer dollars are expressly banned from being used for covid contact tracing. “We will still be doing case investigations and other public health follow up,” said Chris Van Deusen, the state health department’s director of media relations, via email, “but won’t be providing contact tracing for local health departments.” The Texas Education Agency, which oversees primary and secondary education, also said earlier this month that schools are not required to conduct contact tracing.

Contact tracing has been clouded by controversy in Texas. Five legislators sued Republican Gov. Greg Abbott and the health department in August 2020 for awarding a contract to conduct the program. “The contract tracing policy has never been established as a policy accepted or supported by the Texas Legislature,” the suit said. Another lawsuit filed the same month by dozens of Texans alleges that the adoption of contact tracing violates their constitutional right to privacy.

In Texas’ Williamson and Bexar counties, where community covid transmission is high, local health officials are troubled by the lack of statewide tracing.

Williamson County turned to the state health department for help in contact tracing and case investigation as 50 to 100 new cases per day were being reported.

The county health department, which is separate from the county government, also trained more than half its staff to do contact tracing, everyone from clinical staff to press, said Allison Stewart, lead epidemiologist at Williamson County and Cities Health District, but the 65 people, including external staff and volunteers, couldn’t keep up with cases. Some worked seven days a week or 12-hour days, but now the county relies on the state for that work. “We can’t return to those days now, because all the people that we used actually are doing their real jobs,” she said. “We’re trying to figure out right now what the plan is come Sept 1. And it may mean the plan is that we don’t do case investigation or contact tracing.”

San Antonio, one of the country’s largest cities and located in Bexar County, has its own contact tracers but leans on the state whenever there is a surge, said Rita Espinoza, the city’s chief of epidemiology. San Antonio is currently relying on the state and thus able to handle the load without backlogs, Espinoza said. She worries about what will happen in the fall, after school starts and there are more opportunities for transmission. The staff is already operating at a reduced capacity of 80 people.

“The specific impacts are unknown, but it may impact efforts to enhance other infectious disease investigations,” said Espinoza.

Florida, where covid has become a political buzzword, is another state where this tension is playing out. Broward County Mayor Steve Geller said he’s asked about contact-tracing capabilities, including how many investigators the state health department has, but he said he’s only ever told, “We’re working on it. It’s under control.” Contact-tracing data is not publicly available, but Republican Gov. Ron DeSantis once told local reporters contact tracing “has just not worked.”

Geller has not pushed health officials for information, given that “contact tracing doesn’t work well when everyone has covid” and that covid data has become contentious in Florida. “I’m not looking to create any new martyrs,” he said.