Popular smartphone maker Realme has launched the Realme Book Slim as its first laptop in the Indian market. The Realme brand has gained immense popularity in the Indian smartphone market over the years, which has prompted the company to foray into the laptop category as well. The laptop comes in two variants with different configurations. Both the laptops have 11th generation Intel Core processors and 2K Full Vision displays. In addition, the BookSlim comes with 65W super-fast charging technology that can charge up to 50 per cent of the battery in just 30 minutes. 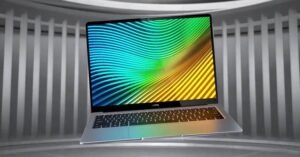 Both the Laptops sports a 14-inch IPS 2K display with a resolution of 2160 x 1440 pixels, 100% sRGB colour gamut, and an aspect ratio of 3:2. It gets a 90 per cent screen-to-body ratio and 400 nits of peak brightness for an immersive viewing experience.

Under the hood, the base variant of the Realme Book Slim is powered by the 11th generation Intel Core i3 processor coupled with Intel UHD graphics. For Storage, It gets an 8GB LPDDR4x RAM and 256GB PCIe SSD storage. However, this variant does not have a Thunderbolt port.

On the other hand, the higher variant comes with the 11th Gen Intel Core i5-1135G7 Processor coupled with Intel Iris Xe graphics. Storage-wise, it has 8GB of LPDDR4x RAM and 512GB PCIe SSD storage. It also has a thunderbolt port for better connectivity.

The Realme Book Slim comes with a dual-fan ‘Storm Cooling’ thermal management system that consists of two copper pipes for heat and faster processing. The device also gets a PC Connect feature that allows users to directly connect the phone’s screen to their laptop. Using this feature users can move files quickly by simply dragging and dropping.

The laptop also gets a backlit keyboard with a three-position light adjustment and a 1.3mm key travel. For security, it has a fingerprint-power button. Apart from this, the BookSlim is equipped with two Harman speakers along with DTS audio technology for an immersive surround sound experience.

Connectivity options include Wi-Fi 6, Bluetooth, a USB A 3.1 Gen 1, USB Type-C port 3.2 Gen 2, and a 3.5mm headphone jack. The RealmeBook Slim packs a 54Wh battery. And Realme claims this laptop can deliver up to 11 hours of battery life on a single charge.

Price in India and Availability

The price of the RealmeBook Slim starts at Rs 46,999 for the i3 variant with 8GB RAM + 256GB storage configuration. While the i5 variant with 8GB RAM and 512GB storage will be available for purchase at Rs 59,999. As an introductory offer, customers can buy the base variant for Rs. 44,999 and the Intel Core i5 variant at Rs. 56,999. It will be available in two colour options – Real Blue and Gray. Its sale will start from August 30 on Flipkart, realme.com and major retail stores.