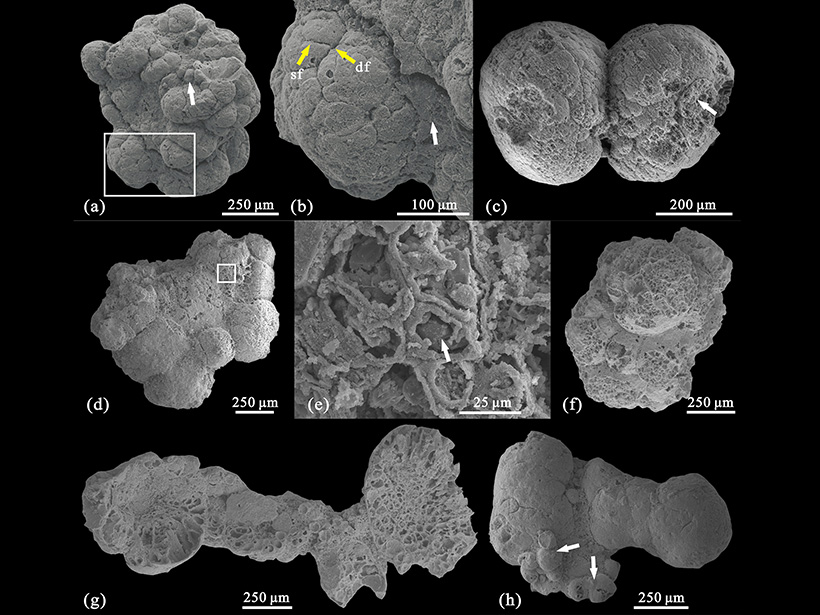 The Cambrian period, which occurred around 541–485 million years ago, is known for its explosive biological diversification. In warm oceans, the planet’s earliest eukaryotes began to thrive and diversify. A major contributing factor to the acceleration of life and the development of early metazoans is thought to be an increasingly efficient food web, created largely by algae. These new photosynthetic creatures allowed for easier nutrient transfer between species than their more ancient equivalents, the cyanobacteria.

A new study by Zheng et al. characterizes large, multicellular algae from a formation known as Kuanchuanpu. The site, located in southern Shaanxi Province in China, contains a famous collection of metazoan fossils from the Cambrian era. Using a combination of scanning electron microscopy and X-ray tomographic analysis, the authors reveal an organism with external membranes and cell walls. The cells in the specimens are organized into large spatial patterns, specifically, an inner and outer area, which the researchers refer to as a cortex and a medulla. These features lead the scientists to conclude that the fossil shows organized, multicellular algae enclosed in a membrane rather than a group of cyanobacteria or metazoan embryos.

The team also hypothesizes that the cortex-medulla organization seen in the specimens suggests an asexual life cycle wherein the organism grows from a single round ball of cells into a globular collection, where each lobe contains its own cortex-medulla organization inside. If their analysis is correct, these multicellular algae from Kuanchuanpu Formation appear consistent with contemporary specimens found at the Weng’an biota from the Ediacaran, south China. (Journal of Geophysical Research: Biogeosciences, https://doi.org/10.1029/2020JG006102, 2021)