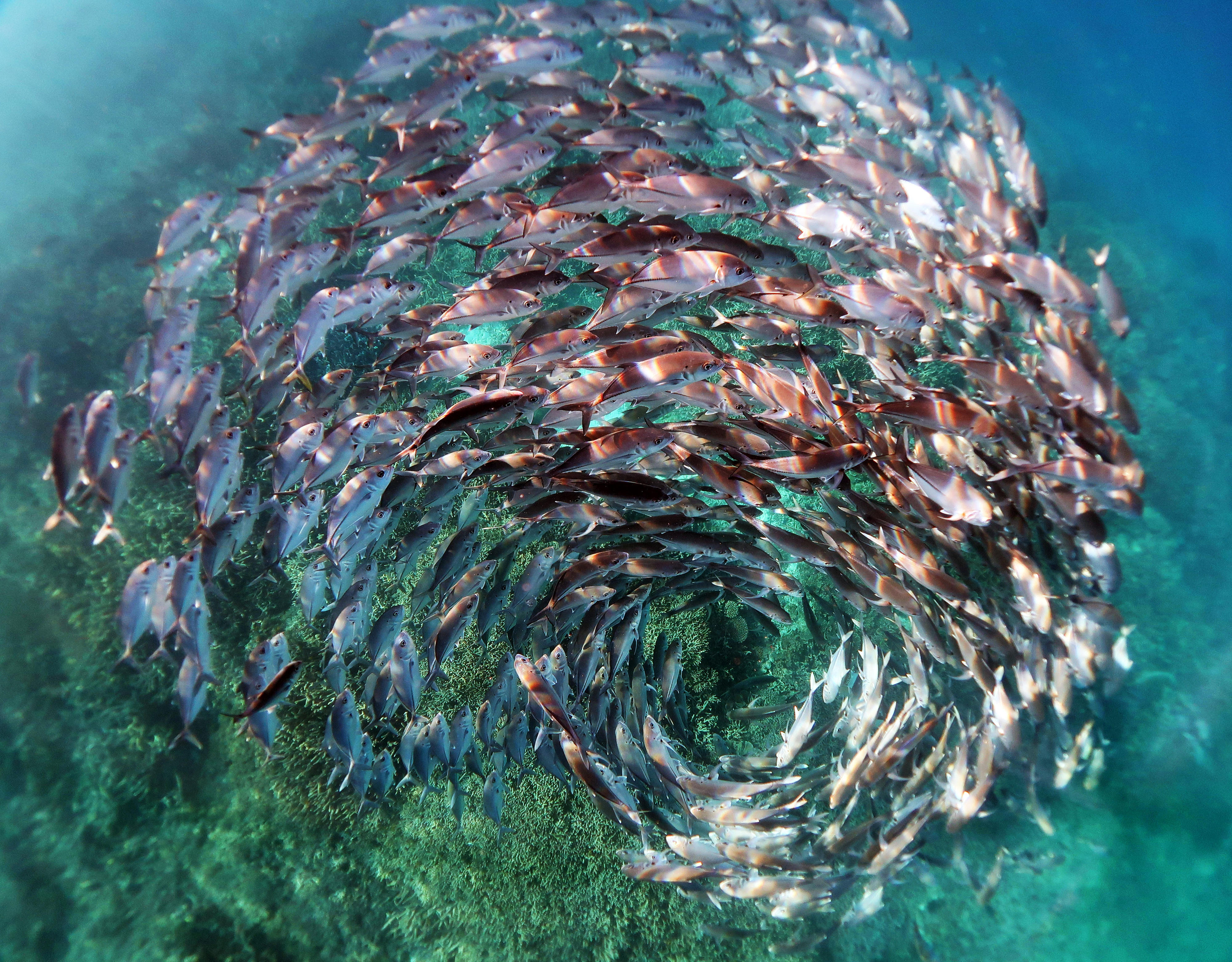 A photo of a jack fish spiral taken at Heron Island has won the BMC Ecology and Evolution image competition. The photo, taken by Kristen Brown from the University of Pennsylvania, USA, is among a series of images of nature released by the journal, available to use under a Creative Commons Attribution 4.0 (CCBY) license.

From furry crustaceans to hunting wasps and escaping frogs, the 2021 BMC Ecology and Evolution Image Competition has produced an impressive collection of celebrated images that showcase the diversity of Earth’s animal and plant life. All images are open access and available for use under a Creative Commons Attribution 4.0 (CCBY) license.

The overall winning image by Kristen Brown from the University of Pennsylvania, Philadelphia, USA depicts a school of jack fish in a spiral formation at Heron Island in the Great Barrier Reef, Australia.

Kristen Brown said: “This image represents both the beauty and bounty of our oceans as well as the spiralling crisis unfolding within the marine environment. Coral reefs with high coral cover and plentiful fish populations like this one at Heron Island on the Great Barrier Reef are sadly becoming rarer. Without a concentrated effort to reduce greenhouse gas emissions and improve water quality, coral reefs as we know them are at risk of disappearing within our lifetime.”

Section editor Josef Settele recommended the entry, saying: “Marine biodiversity sustains life and the health of our planet, but human activities are threatening the well-being of the world’s oceans. Kristen Brown’s striking image is a symbol for the need for concentrated efforts to manage biodiversity loss and set conservation priorities.”

In addition to the winning image, the judges also selected an overall runner up, as well as winners in six categories: Conservation Biology; Evolutionary Developmental Biology and Biodiversity; Behavioural Ecology; Human Evolution and Ecology; Ecological Developmental Biology; Population Ecology; and the Editor’s Pick. The winning images celebrate Earth’s biodiversity and its evolutionary origins, from how species learn and develop, to conflict, collaboration and parasitic relationships, both between and within species.

The Population Ecology category winner was captured by Roberto García-Roa from University of Valencia, Spain, who also submitted the winning images for the Behavioural Ecology and Human Evolution and Ecology categories. It shows soldier termites migrating along a length of abandoned rope in a Malaysian forest.

Roberto García-Roa said: “Thousands of soldier termites are able to migrate in a complex social environment where each individual has its own mission framed altogether in a global objective: the survivorship and reproduction of the colony. In this case, these termites used meters of an abandoned rope to move across the Malaysian forest. Once humans disappear, nature recovers its space and uses what is needed to survive.”

The Editor’s pick titled ‘Eerie Stalker’ by Dimitri Ouboter from the Institute for Neotropical Wildlife and Environmental Studies, Suriname captures a Giant Gladiator Frog seconds before escaping from an attempted snake attack. Giant Gladiator Frogs have been previously observed escaping from the jaws of snakes by emitting distress calls, jumping and inflating their lungs, making it harder for small snakes to hold on to them.

Editor Jennifer Harman said: “We had a wonderful experience judging the fantastic images submitted to this year’s competition. Our section editors used their expertise to ensure the winning images were picked as much for the scientific stories behind them as for the technical quality and beauty of the images themselves. As such, the competition very much reflects BMC’s ethos of innovation, curiosity and integrity. We thank all those who took part in this year’s competition; we hope that our readers enjoy viewing these images and discovering the stories behind them.”