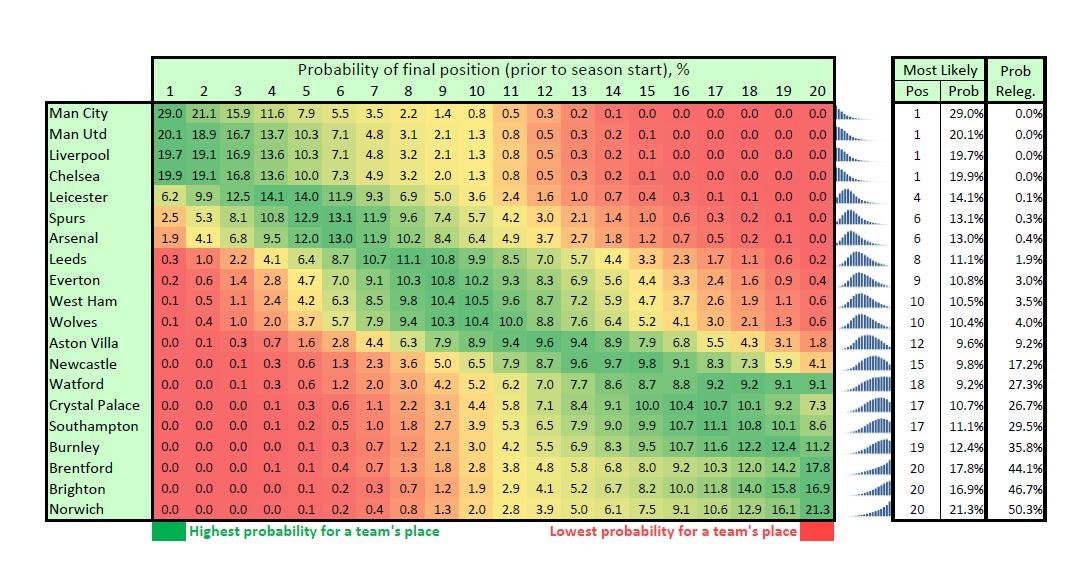 The UK soccer season kicks off this weekend with the start of The English Premier League (EPL). Manchester City have a 29.0% chance of coming top this year according to the University of Adelaide’s Professor Steve Begg.

Organisation/s: The University of Adelaide

From: The University of Adelaide

The UK soccer season kicks off this weekend with the start of The English Premier League (EPL). Manchester City have a 29.0% chance of coming top this year according to the University of Adelaide’s Professor Steve Begg.

The most likely finishing positions for Manchester United, Liverpool and Chelsea are also number one, but with a lower probability of about 20% each. These teams are also the most likely to take the four qualifying spots for the European Champions League with Leicester, Spurs and Arsenal also in with a reasonable chance.

At the other end of the table, newly promoted Norwich has a 50.3% chance of being relegated back to the Championship. Brentford, also newly promoted, and Brighton are most likely to take the other two relegation positions, with Crystal Palace, Southampton and Burnley fighting to avoid the drop.

Professor Begg from the University’s Australian School of Petroleum and Energy Resources has developed a way of calculating the probability of each team finishing in any given position by assessing the uncertainty in the key factors that determine their performance. He uses similar techniques in his ‘day job’: researching how to make better business decisions.

“When the outcomes of decisions are influenced by things beyond our control, such as most business decisions, the uncertainty often makes predictions very counter-intuitive. Unfortunately, we humans have not evolved a good intuitive capability to reason correctly when we are in uncertain, novel or complex situations,” said Professor Begg.

Professor Begg has used ‘Monte Carlo simulation’ to work out the probabilities of how the 2021-2022 season will turn out. The technique was first developed in the Second World War by scientists working on the atomic bomb.

“It goes beyond many modern-day artificial intelligence and machine learning algorithms by generating the probabilities of many possible outcomes, not just a single ‘best’ prediction,” said Professor Begg.

“As a dyed-in-the-wool Manchester City fan since 1967 I would love to see them win it again. However, I have learned that emotions, wishful-thinking and intuition often lead to poor probability assessments and bad decisions. I can make better assessments by minimizing personal biases and relying on simple uncertainty models, grounded in actual data.”

He starts by assessing the uncertainty in a team’s average form for the upcoming season based on their performance trend over the last three years, their short-term trend towards the end of last season, and player transfers during the off-season. Last season, the traditional advantage for the home team did not occur, however, with the relaxation of COVID restriction in the UK, Professor Begg has factored it in for the upcoming season. This information, along with a random factor, is used as the basis to simulate the score for each of the 380 matches in the season.

Professor Begg repeated this process 100,000 times – 38million match simulations in total – to generate 100,000 possibilities of how the whole season could evolve and used the results to calculate probability of each team finishing in any given position, as shown in the chart. The simulations are constrained to ensure consistency with typical numbers of home wins, draws, losses, goals and points from the last 13 years of the EPL.

Although there are 2,432 quadrillion ways the final positions could be arranged, 100,000 simulations are “more than enough” to make a good assessment of the probabilities. Professor Begg can generate 10,000 different simulations of the whole season per minute on his laptop computer.

“It is not possible to draw conclusions about probability accuracies from a single outcome – you have to pick a probability, say 0.7, and observe how frequently all the outcomes with that probability actually occurred. If they do so about 70% of the time, then the probability assessment is well-calibrated (accurate) for that level,” he said.

He has simulated the past two EPL seasons so now has enough outcomes (40 known positions) to enable this sort of analysis across a range of probabilities, as shown in the chart.

“Considering the relatively small number of observed league positions, I am very pleased. For probabilities greater than about 0.45 the method is pretty accurate. Below that number I am a bit under confident, meaning that my ranges are a bit too wide – people are usually over-confident when making these type of assessments – they make their uncertainty ranges too narrow.”

Over the course of the coming season, Professor Begg intends to periodically update the uncertainty in each team’s season-form, to take account of how they are actually performing, and re-run the simulations.