For any music lovers out there, one of the best everyday-gadgets that you can get for yourself is a pair of True Wireless Stereo Earbuds. That’s because, nowadays, most TWS Earbuds are designed to offer you a fairly decent sound quality which is also combined with a reasonably long battery life. Now, some newer TWS Earbuds models also come with some very convenient functionalities integrated into them which are mainly focused on everyday-use, including functions such as Quick-Touch Controls as well as support to simple Voice Controls. When taking all of those neat features into consideration, it can sometimes be hard to know what brand to go for when trying to choose a brand-new pair of TWS Earbuds for yourself. On that note, consider checking out the newly released Soundpeats H1 TWS Hybrid Dual Drivers Earbuds.

The Soundpeats H1 are high-end True Wireless Stereo Bluetooth Earbuds that come equipped with Hybrid Dual Drivers for an outstanding and crystal-clear stereo sound, all while also featuring All-in-One Quick-Touch Controls, a Smart AI Assistant for easy-to-use Voice Commands, and up to 40 hours of battery life.

Not only that, but featuring these TWS Earbuds also integrate Deep Passive Noise Cancellation, which helps to suppress a lot of the passive outside noise down to a barely noticeable level.

On top of all of that, the Soundpeats H1 also feature a TrueWireless Mirroring Technology for listening either in Mono or Stereo Sound Playback, and these TWS Earbuds also feature an Advanced Game Mode that users can enable to lower the earbuds’ latency even further down for a virtually lag-free gaming experience.

By using these True Wireless Stereo Bluetooth Earbuds you can always have a truly immersive on-the-go listening experience on a regular basis, no matter where you are, whether that’s at home, work, or going through your usual daily commute between one place and the other.

So, let’s have a more detailed look at the Soundpeats H1 and check out everything that these high-end True Wireless Stereo Bluetooth Earbuds have to offer you.

Starting with the earbuds’ size, the Soundpeats H1 feature a very compact design that’s mainly focused on comfort and portability. That said, each earbud measures just 0.96 inches long by 0.88 inches wide by 1.06 inches tall / thick (24.5 x 22.5 x 27 mm). And speaking of portability, both earbuds are also extremely lightweight, with each weighing just a measly 0.22 oz. (6.5 g).

Now, speaking in terms of comfort, these earbuds feature a premium ergonomic design that’s mostly focused on full-day wearing, and as such, they come equipped with specialized Comply Memory Foam Eartips, which not only ensure that you always get a super-comfortable fit, but ultimately also help to suppress / block a lot of the passive outside noise down to a barely noticeable level, thus making your listening experience much, much better.

Furthermore, these earbuds are also rated to have a IPX5 Waterproof-Rating, meaning that they can resist sweat and the occasional water splashes (including very light / low-intensity rain or the occasional rain drops – not heavy rain).

Last but not least, the Soundpeats H1 Earbuds also come with their very own Charging Case, which not only can be used as the earbuds’ Storage Case, but also works as their proprietary and dedicated Wireless Charging Case. 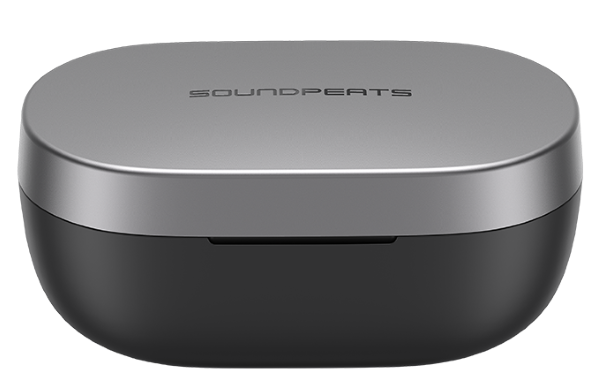 Finally, I’d also like to note that the earbuds’ Charging Case features a reasonably compact design that makes it easy to carry around with you at all times.

Now, onto the earbuds’ Audio Specs and their overall Audio Quality. Starting with their main audio component, we have the earbuds’ Hybrid Dual Drivers, for which each of these earbuds integrates a 8.6mm Super Dynamic Driver that’s combined with a Knowles Balanced Armature Driver.

This revolutionary patented crossover ultimately helps to ensure that the earbud’s sound-quality has a detailed and crystal-clear treble (meaning the highs / high-sound frequencies), as well as completely natural and smooth mids (the mid-frequency sounds) without any distortion at all, and also a very deep and punchy bass that’s always pleasant and exciting to hear.

In addition to all of that, each of the Soundpeats H1 Earbuds also comes equipped with built-in Dual Microphones (meaning 2 separately integrated microphones) that work together with the latest cVc Noise Cancellation Technology, which, just like their specialized Comply Memory Foam Eartips, also help to suppress / block a lot of the passive outside noise down to as low as 28dB, which ultimately helps to ensure you have a better listening experience, whether that’s for listening to music, or even for your personal Voice Calls. 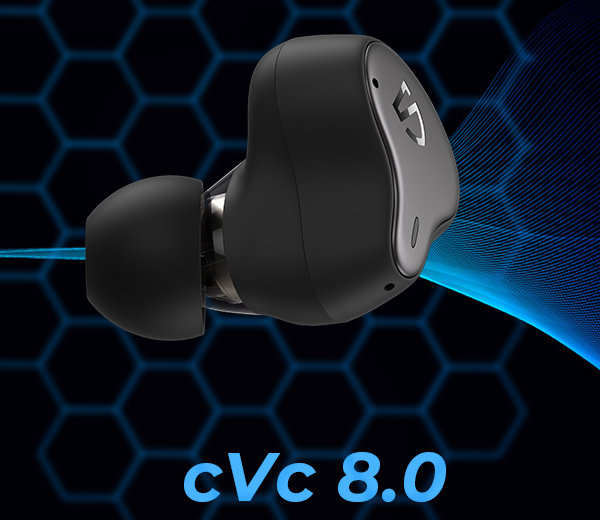 Via your Smartphone, and thanks to the earbuds’ TrueWireless Mirroring Technology, users can change between having just one earbud working or ultimately, both, meaning that they can swap between listening either in Mono or Stereo Sound Playback. 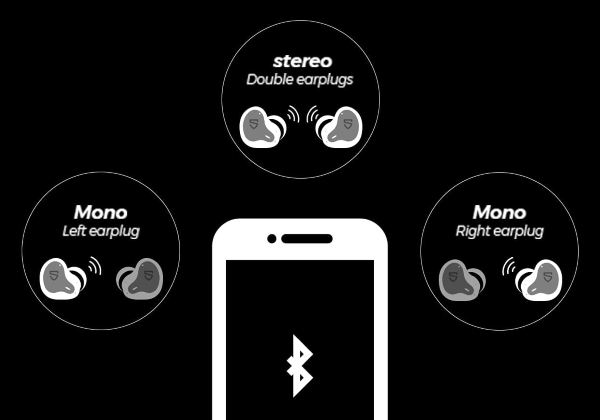 As said before, the Soundpeats H1 Earbuds also integrate All-in-One Quick-Touch Controls. That said, performing just a Single Tap on either the Left or Right Earbud allows you to respectively Lower or Increase their Volume.

Not only that, but users can also use Double Taps for other functionalities. Those would include Double Tapping either Earbud to Play/Pause any audio / music that you’re currently listening to. 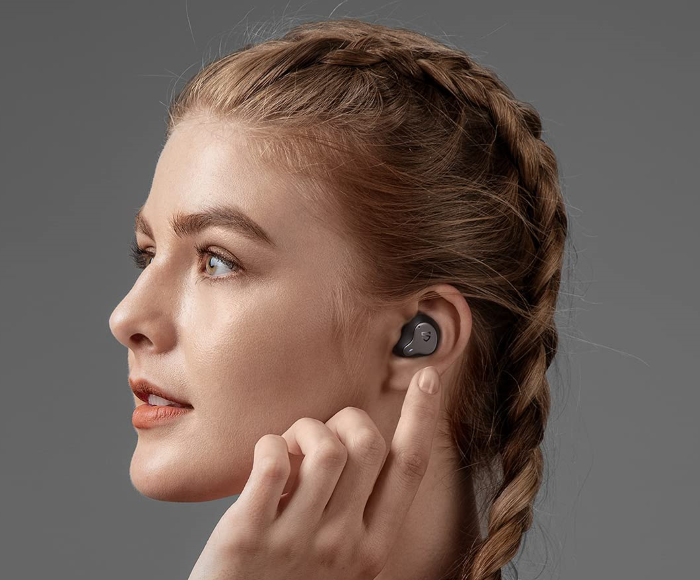 Additionally, for Media Playback Controls, users can also perform a Long Press (for around 1.5 seconds) on either the Left or Right Earbud, which allows them to respectively Go Back to the Previous Track or Advance to the Next Track.

Alternatively, performing a Triple Tap on the Left Earbud allows users to activate their Advanced Game Mode to lower the earbuds’ latency even further down, which cuts down on latency to just 60 ms. 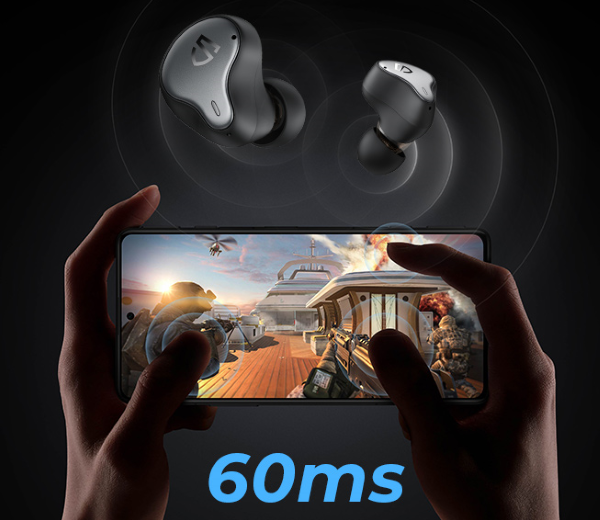 That ultimately allows users to achieve a virtually lag-free gaming experience when they’re playing games on their Smartphone while using the Soundpeats H1 Earbuds.

Last but not least, simply Taking Out or Placing Back the earbuds will allow users to Automatically Power the earbuds On/Off.

Now, for their connectivity, since the Soundpeats H1 are, as mentioned earlier, True Wireless Stereo Bluetooth Earbuds, they also come equipped with a Qualcomm QCC3040 Bluetooth chip, which basically gives these earbuds a Bluetooth 5.2 Connectivity.

The earbuds’ Bluetooth 5.2 Connectivity offers support to the aptX Adaptive codec (which is a next-gen dynamically adjustable audio codec that’s designed to deliver a robust, high-quality, low-latency and low-bit rate wireless audio), to Sub-band Coding / SBC (which is a mandatory and default codec for all stereo Bluetooth headphones that works with the Advanced Audio Distribution Profile (A2DP – a standard Bluetooth stereo streaming protocol), and also support to AAC (an audio standard for lossy digital audio compression).

All and all, these True Wireless Stereo Bluetooth Earbuds integrate three (x3) of the most common audio codecs / audio standards that you’d expect to see on a newly released pair of TWS Bluetooth 5.2 Earbuds.

For their battery life, each earbud comes equipped with a 60mAh battery, which basically offers both earbuds a battery life of between 6 to 10 hours of continuous playback time (this time-frame will basically depend on your Volume Settings and other of the earbuds’ functionalities that you may or may not have enabled).

Then, the earbud’s Wireless Charging Case comes equipped with a much larger and much powerful 500mAh battery that can ultimately offer you an extra 30 hours of battery life, which basically is about 6 full charging cycles for the earbuds, which you can conveniently charge whenever they run out of power. 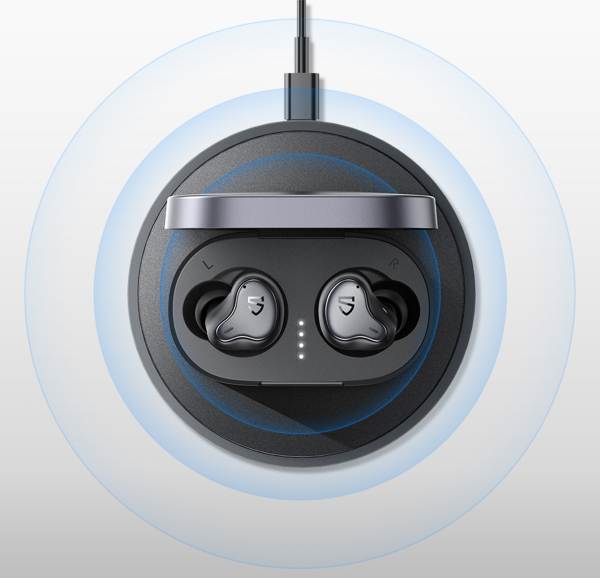 On that note, I’d also like to mention that charging the earbuds from 0% power back to a 100% charge via their Charging Case (Charging Voltage of DC 5V 500mA) should only take you around 1.5 hours of waiting.

Then, for the Charging Case itself, it should only take you around 2 to 2.5 hours to recharge it back to a full charge.

WHAT’S IN THE BOX?

Inside each package, users will find: their SOUNDPEATS H1 Wireless Earbuds, as well as the earbuds’ included set of Comply Memory Foam Eartips and also three (x3) different-size sets of 3 Inter-Changeable Eartips (S/M/L), plus the earbuds Wireless Charging Case and its included USB-C Charging Cable, and also a User Manual.

The Soundpeats H1 are high-end True Wireless Stereo Bluetooth Earbuds that come equipped with Hybrid Dual Drivers for an outstanding and crystal-clear stereo sound, all while also featuring All-in-One Quick-Touch Controls, a Smart AI Assistant for easy-to-use Voice Commands, and up to 40 hours of battery life.

Featuring the latest cVc Noise Cancellation Technology that helps to suppress a lot of the passive outside noise down to a barely noticeable level, a TrueWireless Mirroring Technology for listening either in Mono or Stereo Sound Playback, and an Advanced Game Mode that users can enable to lower the earbuds’ latency even further down for a virtually lag-free gaming experience, these TWS Earbuds are simply some of the best that you can currently find available.

With them, you can be assured to always have a truly immersive on-the-go listening experience for all-day use, no matter where you are, whether that’s at home, work, or going through your usual daily commute between one place and the other.

If you’re interested in buying these TWS Earbuds, each pair is currently discounted from their normal price of $119, now going for just $79 (saves you $40), which, if you ask me, is a no-brainer deal, especially when accounting for all of the cool features that the Soundpeats H1 have to offer you. You can order yours online right now, directly from Soundpeats’ official shopping page, which you can access by clicking here.