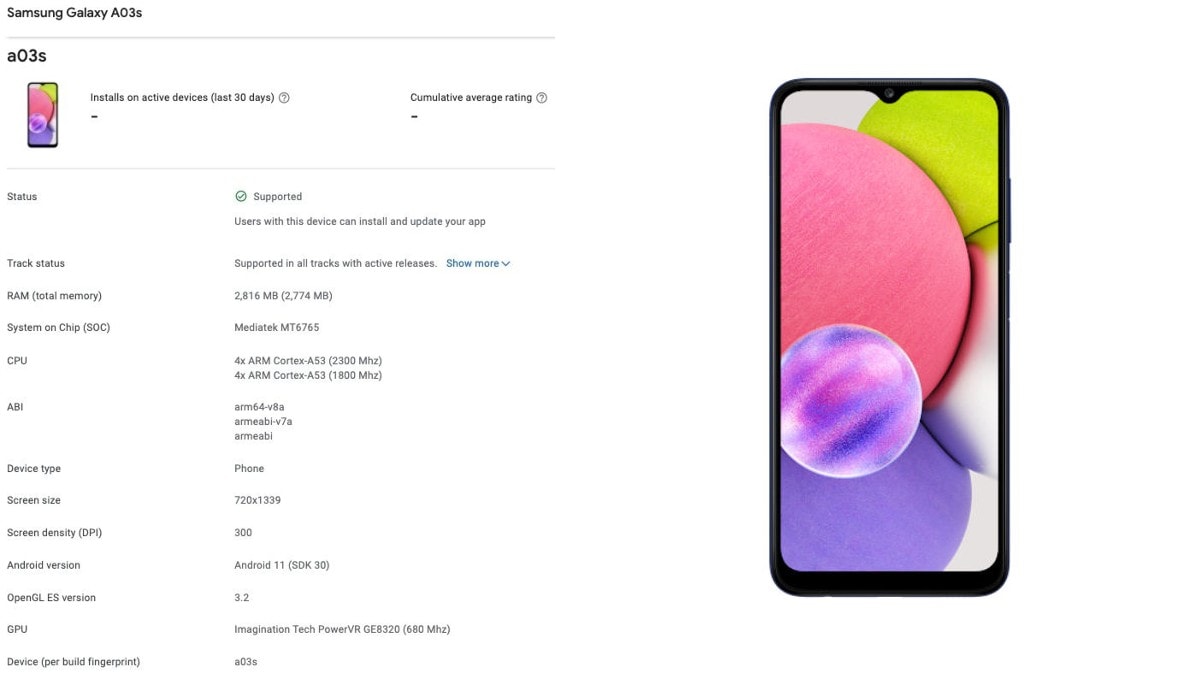 Samsung Galaxy A03s, an upcoming smartphone from the South Korean giant, has reportedly been spotted on Google Play Console. The listing tips key specifications of the phone and even has an image attached, hinting at the phone’s design. The Samsung Galaxy A03s has been spotted on Geekbench in the past. It is likely to be powered by a MediaTek Helio G35 SoC, pack 4GB of RAM, and run on Android 11. The phone was also spotted on the Bureau of Indian Standards (BIS) certification site, hinting at its upcoming launch in the Indian market.

The Google Play Console listing of the Samsung Galaxy A03s, spotted by MySmartPrice, suggests that the phone may feature an HD display with a 720×1,339 resolution and a 300ppi pixel density. The phone is tipped to be powered by a MediaTek Helio P35 (MT6765) SoC paired with 3GB of RAM. It is listed to run on Android 11 software. There is reportedly an image attached to the listing that shows the phone to have a waterdrop-style notch display and a slight chin at the bottom. This could very well just be a placeholder image and the final design of the Samsung Galaxy A03s may be different.

The specifications on the alleged Google Play Console listing are also different than the ones spotted on its Geekbench listing. Both the listings have the same model number SM-A037F, but specifications vary. Samsung is yet to offer any official announcement regarding the Samsung Galaxy A03s and the information leaked thus far might have inaccuracies.

In any case, the phone’s launch seems imminent as its support page has gone live on Samsung’s India website. Samsung Galaxy A03s has also been spotted on the US Federal Communications Commissions (FCC) and Wi-Fi Alliance certification sites. The US FCC certification site suggested that the phone will pack a 5,000mAh battery with a TUV Rheinland certification. Wi-Fi Alliance listing hinted that Samsung is expected to equip the Galaxy A03s with a single-band Wi-Fi b/g/n and Wi-Fi Direct.