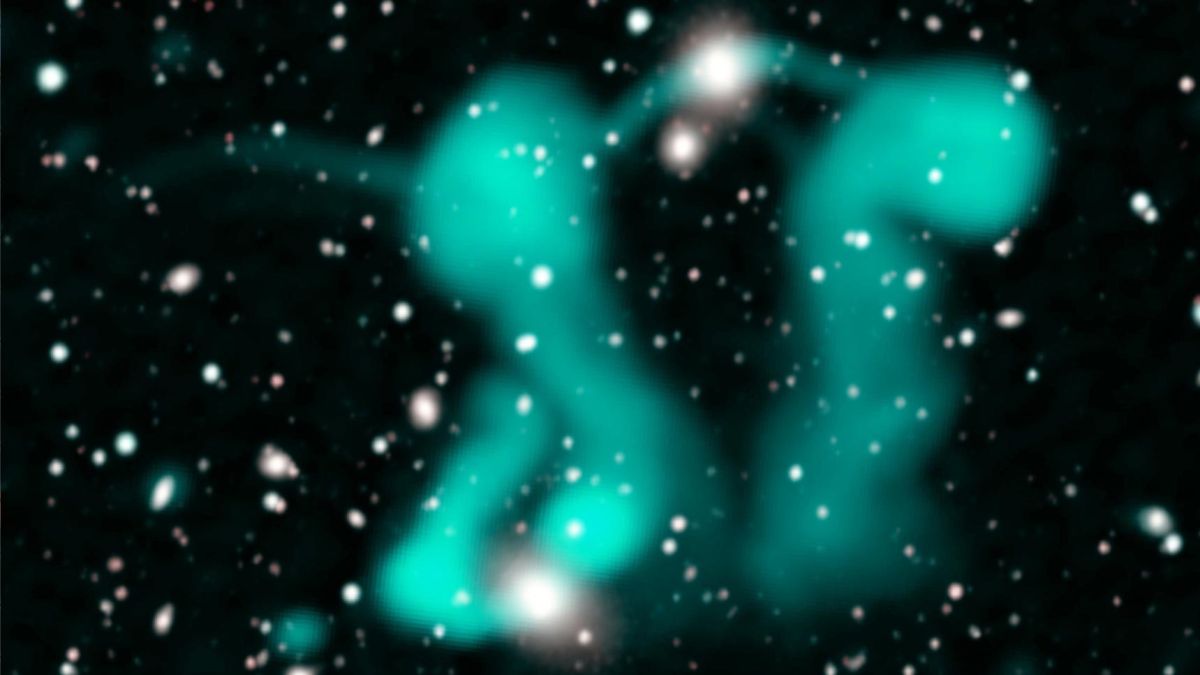 Astronomers have spotted the outline of what appear to be two ghostly figures dancing among the stars.

Located about a billion light-years from Earth, the structures, formally named PKS 2130-538, have been nicknamed the “dancing ghosts” and were discovered as part of the first deep-sky search using the Australian Square Kilometre Array Pathfinder (ASKAP) radio telescope. The search was a part of the first pilot survey by the Evolutionary Map of the Universe (EMU) project.

In a new paper describing the structures, the researchers who spotted the ethereal figures said they are unlike anything ever seen.

“When we first saw the ‘dancing ghosts,’ we had no idea what they were,” lead author Ray Norris, an astrophysics professor at Western Sydney University in Australia, said in a statement.

These electrons come from so-called radio galaxies, which, like a lot of galaxies, are anchored down in their centers by enormous black holes with billions of times the mass of the sun. In the case of radio galaxies, their supermassive black holes produce a lot of light in the radio-frequency range of the spectrum. As a radio galaxy’s matter gets snared by the immense gravitational pull of its supermassive black hole, the matter spirals inward, accelerating to blistering speeds. Because some of this matter is electrically charged, it bounces off the magnetic fields surrounding the black holes, emerging as a fast stream of charged particles called a jet.

When the particle jets from these particular radio galaxies crashed into a stream of intergalactic dust, they imprinted the eerie image of dancing ghosts on the night sky.

But much about these celestial ghosts is still baffling to researchers.

“We still don’t know where the wind is coming from. Why is it so tangled? And what is causing the streams of radio emission? It will probably take many more observations and modeling before we understand any of these things,” Norris said in the statement.

The ghosts aren’t the first weird phenomenon to be discovered by the EMU project. In 2019, the team discovered giant, unexplained rings of radio emission surrounding distant galaxies. The researchers dubbed the rings, which measure nearly 1 million light-years across, Odd Radio Circles.

“We are even finding surprises in places we thought we understood,” Norris said.