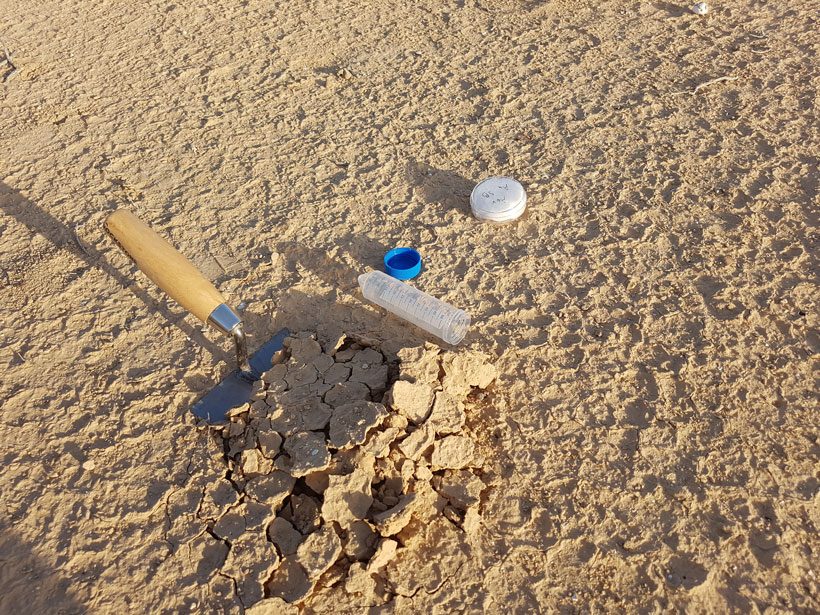 Photosynthesis is thirsty work—it requires just as much water as it does carbon dioxide, and in deserts, it can all but shut down. Without the organic carbon photosynthesis provides, life in arid climes must either compete for scraps blown in from afar or wait for rain. But despite the twofold challenge of drought and starvation, microbes in many desert soils somehow manage not only to survive but to flourish.

“The enigma has always been: Why are deserts diverse?” said Sean Bay, a microbial ecologist at Monash University in Melbourne, Australia. “Why do we see so many rich microbial communities?”

In Israel’s Negev Desert, microbes are pulling off a metabolic magic trick. By “burning” hydrogen gas scavenged from the air, they can scrape together enough energy to survive dry spells—and some can even use hydrogen to fuel carbon fixation.

Bay and his colleagues may have found an answer in the hyperarid soils of Israel’s Negev Desert, where microbes are pulling off a metabolic magic trick. By “burning” traces of hydrogen gas scavenged from the air, they can scrape together enough energy to survive dry spells—and some can even use hydrogen to fuel carbon fixation. The researchers announced their findings in The ISME Journal: Multidisciplinary Journal of Microbial Ecology.

The Negev Desert is a natural experiment in how microbes adapt to aridity. “Over a relatively short spatial scale—[the farthest sampled] soils were approximately 160 kilometers apart—you have got distinct climatic zones,” said Bay. Driving south from the Judea Hills, the landscape of green chaparral gives way to dramatic swaths of chalky brown and tan. The researchers gathered 72 soil samples along this natural climatic gradient for analysis in their Melbourne lab, where they hoped to discover genetic or chemical clues explaining the unexpected diversity of microbial communities in arid environments.

Specifically, Bay and his colleagues wanted to find out how the Negev Desert microbes might be using hydrogen for survival.

“In these large swaths of arid ecosystems, trace gas metabolism is likely a really important part of microbial metabolism,” explained Laura Meredith, an environmental scientist at the University of Arizona who was not involved in the new research. Trace gases like hydrogen and methane are naturally present in the air, together accounting for about 0.1% of atmospheric gases. Some microbes have specialized enzymes that can capture trace gases and exploit them for energy when there are few other resources available.

Previous studies showed that microbes can use hydrogen to run their life-support systems while waiting for favorable conditions in a kind of stasis, or dormancy. And Bay suspected that hydrogen might be fueling carbon fixation in deserts, too.

“Something seemed off about the accepted model,” he said. “These [photosynthesizing] communities of cyanobacteria—which are really, really low abundance in these soils—are providing enough energy, or organic carbon?”

Bay’s bet on hydrogen appears to have been justified. He and his colleagues discovered genes associated with hydrogen metabolism were widespread across the samples and enriched in samples from drier soils. Microbes inhabiting the driest soils consumed hydrogen 143 times faster than those in samples collected from the greener Judea Hills. The research team even found evidence that soil microbes from across the climatic gradient will “burn” hydrogen to power carbon fixation as a supplement to photosynthesis when provided with a bit of water.

“It’s like adding another ecological player, another strategy,” said Meredith.

Implications for the Carbon Cycle

Bay saw the results as evidence that trace gas metabolism is far more widespread than previously thought—not a niche process used by a handful of exotic bacteria, but something that takes place across entire ecosystems. And according to Meredith, microbes that use trace gases like hydrogen to maintain and create new biomass could also be tinkering with Earth’s carbon cycle.

“Carbon cycling in arid ecosystems, we know, is a leading contributor to overall carbon cycle variability at a global scale,” she said, “so anything that’s contributing to carbon fixation or carbon stabilization in the massive swaths of arid lands around the world is also important.”

Bay agreed. “I think that’s a really exciting part of this research…it’s not just about discovering curious new ecosystems or curious new processes. There are actually really important implications.”