The boss of Norwegian Cruise Line Holdings has insisted “everything is working as planned” after a passenger was prevented from boarding Norwegian Jade’s restart sailing out of Athens after they tested positive for Covid-19.

Speaking hours ahead of Norwegian Cruise Line (NCL) vessel Norwegian Encore’s return voyage out of Seattle in the US, president and chief executive Frank Del Rio told media that society is “going to learn to live with [Covid-19]”.

Norwegian Jade (pictured) became the first ship in the company’s fleet to resume operations in Greece, on August 1, and Encore returned over the weekend on a seven-day round-trip Alaska cruise from Seattle. 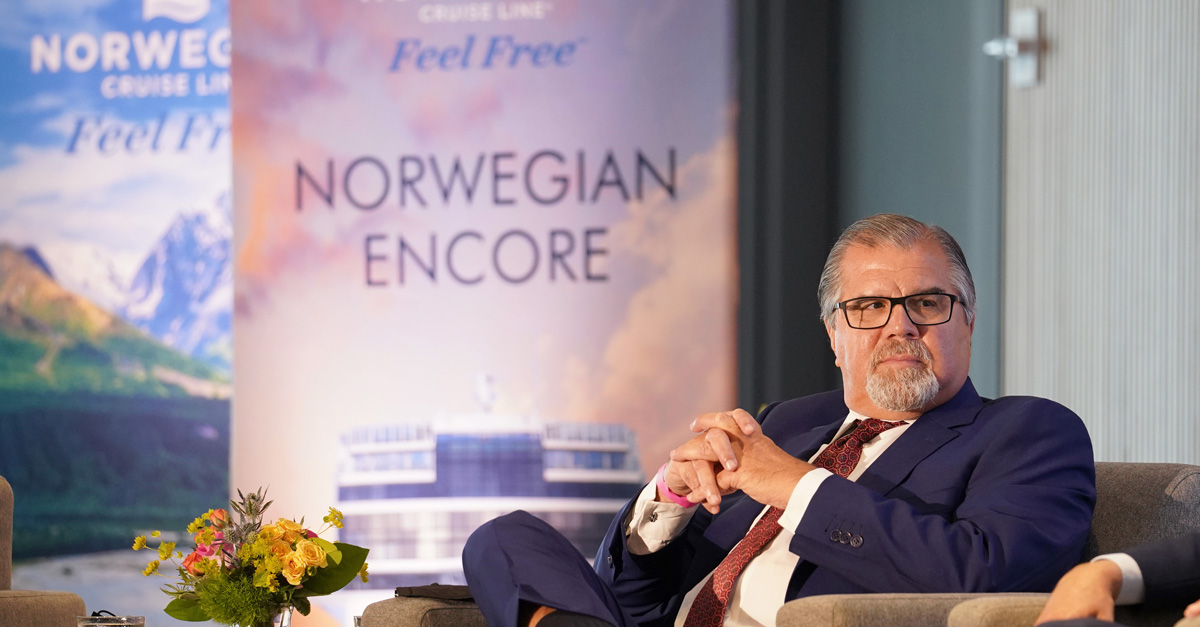 Asked what the company had learned from Jade’s restart sailing at a press panel event on Friday in Seattle, Del Rio said: “Everything is working as planned. We detected one case, I believe, of a fully-vaccinated person that upon check-in tested positive. Obviously they were denied boarding and went into a quarantine situation, but the protocols are working.”

Del Rio confirmed that the three-brand company’s 28 ships would sail at 60% capacity for the first 30 days, but passenger levels would increase to 80% “if everything is working fine” for the following 30 days.

NCLH’s vessels will aim to operate at full capacity after 60 days, said Del Rio, who added that ships had undergone practice cruises ahead of scheduled revenue sailings.

The company reiterated its pledge that all passengers and crew across its three brands – NCL, Oceania Cruises and Regent Seven Seas – must be double-jabbed before boarding any vessel in its fleet.

Del Rio said: “No one mandated [practice cruises], we did it on our own. We do have new protocols; we have new crew that we want to train, and we wanted to make sure that everyone was ready to go.

“It’s a work in progress; 2021 is a transition year. We’re hopeful that we, society, have learned to live alongside the virus. The virus is not going to be killed, or extinguished, we’re going to learn to live with it. All of us may have to take another Covid shot at some time in the future.”

Harry Sommer, Norwegian Cruise Line’s president and chief executive, explained how operating at reduced capacity initially provided an extra “layer of protection” to keep “guests, crew and the places we visit as safe as possible”.

He also added how NCL planned to resume operations in Asia and Australia in early 2022. “Currently, New Zealand and Australia governments do not allow cruising,” he said. “But they seem to be making some progress on the vaccination front.

“We hope that we can start cruising again in the Australia, New Zealand bubble in early February of next year.

“Asia is a little more challenging because the countries there are at different phases of vaccinations, but assuming that vaccines will be generally available in that region at around the same pace… we’re hoping that that can start cruising in that region come the end of January or February next year as well.”

Sommer was questioned about what the NCL brand had done for agents during the pandemic. He said: “The trade community is extraordinarily important to us. From the very beginning we’ve tried to support the trade community by protecting their commission, continuing marketing activities with them and we’re committed to doubling down on those efforts going forward.

“The trade community took a hit this past year as many small and medium-sized businesses did. We hope to see, and we’ve already seen some rebound in terms of trade community numbers, that continue in the near future.

“[Prima] is a game-changer,” he said. “I guess we had a little bit of foresight, we had a vision when we set out to design a ship with a lot more space for our guests.

“While, we thought that resonated two or three years ago when we did the design work, it certainly resonates now. One of the innovations is we have a huge increase of space on deck eight which we’re going to call Ocean Boulevard, something like 40,000 square feet with infinity pools, outdoor dining, sculpture garden, a glass walk-way.

“The outside of the ship is completed with hull art. [The ship] had its float out this week. We also have a huge focus on food and providing a fantastic food experience for our guests. We’re going to have 11 food venues [on deck eight].”