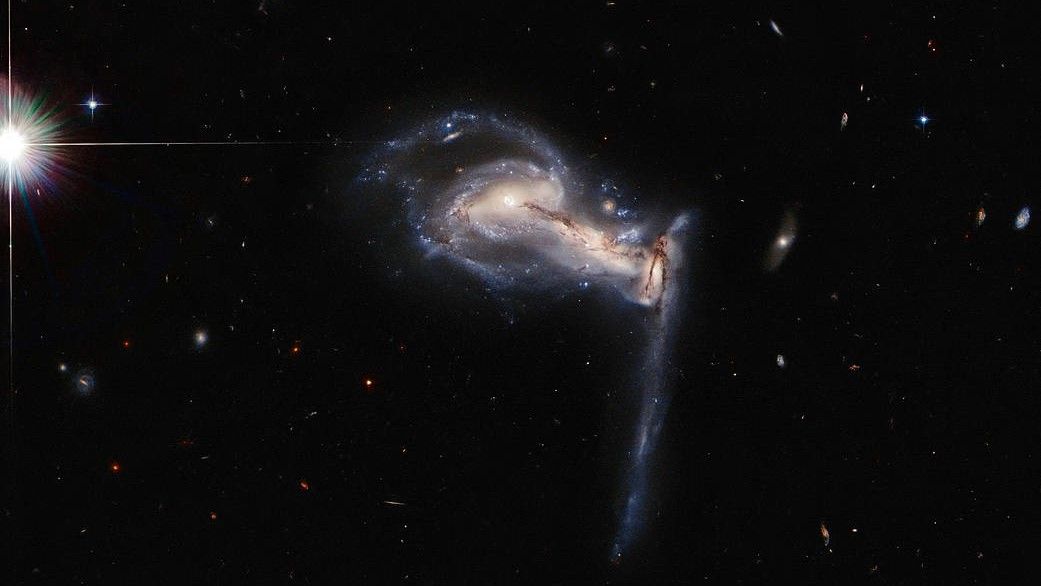 A stunning Hubble Space Telescope image of three galaxies tearing each other apart has given astronomers an early glimpse into the Milky Way’s fate.

Located 389 light-years away from Earth in the constellation Lynx, Arp 195 is a galaxy cluster made up of three galaxies ripping each other apart in a three-way gravitational tug-of-war. It is a destiny that astronomers predict will befall the Milky Way when, in 4.5 billion years’ time, it is set to collide with the neighboring Andromeda galaxy, according to an assessment by the European Space Agency.

The image was captured just two weeks after a five-week hiatus in the 31-year-old space telescope’s operation. In June, NASA lost all control of Hubble following an issue that rendered its payload computer inoperable, but it is now back in action after a switch to backup hardware in July.

Related: The 15 weirdest galaxies in our universe

NASA says it captured the image of the three “squabbling galactic siblings” long after they had become snared by each other’s gravitational pull. The three galaxies are now spiraling in ever closer orbits towards each other, colliding and tugging off threads of material as they do.

Now that the galaxies are in a tight orbit around each other, the largest one is able to use its more powerful gravity to snare material from its smaller rivals, creating the streak of dust, gas and stars between them that can be seen in the image.

Eventually, the galaxies will merge into one. Despite how apocalyptic this sounds, there is so much space between the stars inside galaxies that the stars are very unlikely to collide with each other. In fact, the addition of extra material brought by merger should increase the number of stars being born in the newly unified galaxy.

The same fate awaits our galactic home, the Milky Way, when it finally merges with Andromeda — relatively few stars will collide and our solar system will likely survive largely unscathed, although it could be flung into a different path around the new galaxy’s center.

The future merger between the Milky Way and Andromeda will not be the first time that our galaxy has collided with another. The Milky Way is thought to have swallowed at least a dozen galaxies over the past 12 billion years — including one collision called the Gaia sausage merger — adding the stolen stars to an ever-growing galactic gumbo, Live Science previously reported.