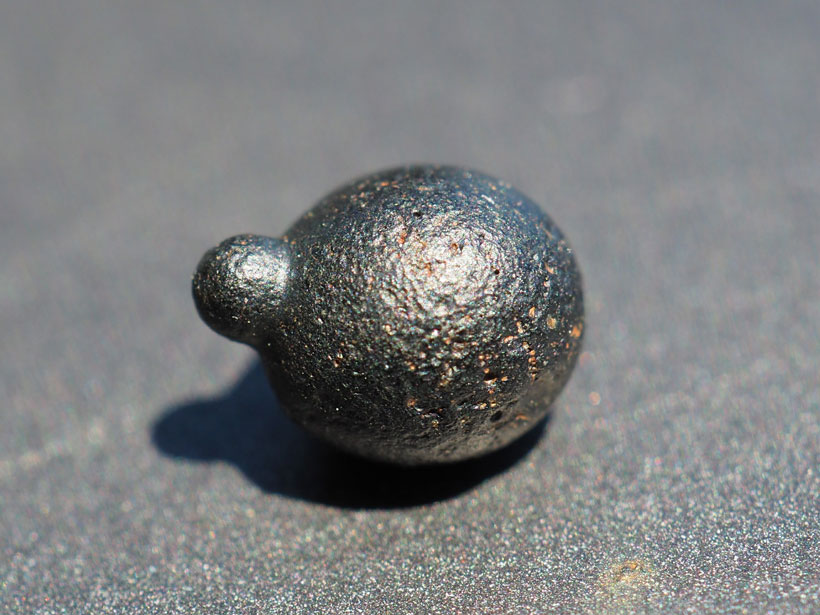 Craters are telltale evidence of massive meteorite impacts. But on an eroding planet like Earth, they disappear over time. Scientists now have found a much more subtle calling card of an impact—tiny nodules of glass, forged at high temperatures and pressures—strewn over hundreds of square kilometers in Chile’s Atacama Desert. These centimeter-sized objects, which researchers have dubbed “atacamaites,” were likely formed when an iron-rich meteorite struck Earth roughly 8 million years ago, the team concluded.

Space rocks that enter Earth’s atmosphere—meteors—typically move at several kilometers per second, and they deliver a ferocious blow if they strike the planet. All of that energy can melt terrestrial quartz-containing rocks and launch the resulting molten material high into the atmosphere, where it can resolidify midflight. The resulting nodules of glass often have characteristic aerodynamic shapes reflective of their airborne journey.

Such “impact glasses” are relatively rare, however: Prior to this discovery in Chile, only five geographically distinct groupings of impact glasses were known. “There are shockingly few of them,” said Aaron Cavosie, a planetary scientist at the Space Science and Technology Centre at Curtin University in Perth, Australia, not involved in the research. “They’re special.”

Finding another site of impact glasses is always exciting, added Marc Fries, a curation scientist at NASA Johnson Space Center in Houston also not involved in the research. “It adds to the record of impacts on the planet.”

Michael Warner, an electrical engineer at the National Optical-Infrared Astronomy Research Laboratory in La Serena, Chile, has been searching the Atacama Desert for meteorites since 2002. It’s an ideal place to look for space rocks, he said, because they tend to just sit there rather than being washed away or buried by erosion. “The surface hasn’t been altered for about 20 million years.”

In 2007, Warner found his first meteorite, a roughly half-kilogram specimen. Five years later, on another trip to the Atacama Desert, Warner and his son found a plethora of small, black objects. They weren’t much to look at, the elder Warner remembered. “I thought they looked like rat poop.” But he picked up some of the centimeter-sized objects nonetheless and mailed six to Jérôme Gattacceca, a geologist at the National Centre for Scientific Research in Aix-en-Provence, France, who had previously helped Warner classify his meteorite finds.

Gattacceca was immediately intrigued. “They looked unusual,” he said. Gattacceca ruled out common basaltic rock, and he concluded that the samples were impact glasses. Their smooth, rounded shapes—including rods, teardrops, and dumbbells—were one giveaway. “You can see that they’ve flown in the atmosphere,” said Gattacceca.

A Trove of Glass

Gattacceca and several of his colleagues have since traveled to the Atacama Desert to collect more. Their fieldwork, which began in 2014, has since revealed more than 23,000 of these atacamaites.

“Atacamaites have no equivalent among the few known terrestrial ejected impact glasses.”

Gattacceca and his collaborators analyzed several atacamaites in the laboratory and showed that they’re made largely of terrestrial rock, as expected. But meteoritic material—most notably, iron, nickel, and cobalt—accounts for about 5% by weight of atacamaites, the researchers noted. That’s a significantly larger extraterrestrial contribution than what’s typically found in other impact glasses. “Atacamaites have no equivalent among the few known terrestrial ejected impact glasses,” the team reported in June in Earth and Planetary Science Letters.

On the basis of extraterrestrial material found in atacamaites, Gattacceca and his colleagues surmised that the meteorite that produced these impact glasses was most likely dominated by iron. The impact that created atacamaites occurred roughly 8 million years ago, fission-track dating suggested, but there’s mysteriously no evidence of a crater within the roughly 25-kilometer × 25-kilometer strewn field. It might have eroded away, the researchers suggested, but they’re not giving up the search yet. They’re scouring satellite imagery and are planning future fieldwork in the region. “We’ll go back,” said Gattacceca.

What Is DataOps? Data Operations Explained