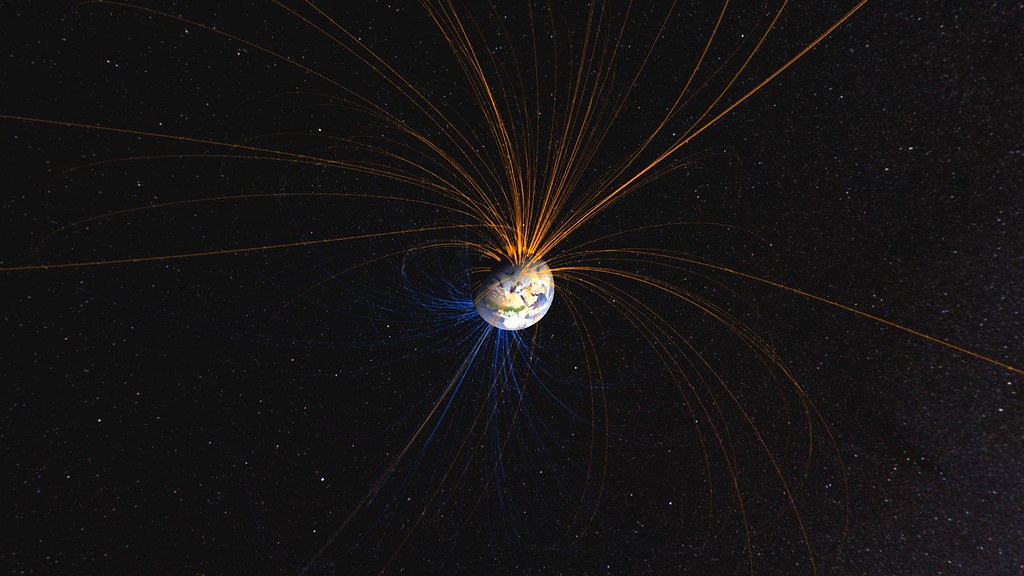 Earth’s magnetic field protects us from solar winds and harmful radiation. Every other planet in our Solar System (except Venus) has, or had, a functioning magnetic field. Because of this, scientists believe that planets in other solar systems, called exoplanets, must also have their own magnetic fields.

Theoretical models can roughly estimate what an exoplanet’s magnetic field might look like. However, the best method for actually measuring exoplanetary magnetic fields is to look at radio emissions from other solar systems. In a process called the Cyclotron Maser Instability (CMI) mechanism, electrons from solar wind get caught up in the exoplanet’s magnetic field and accelerate to high speeds. These fast-moving streams of electrons are detectable from Earth as radio signals. Because CMI emissions also have a unique shape, it is unlikely for other astrophysical processes to contaminate the signal with false positives. Therefore, looking at radio emission from other solar systems is a great way to indirectly measure exoplanetary magnetic fields.

A team of researchers, led by Jake D. Turner from Cornell University, used a sensor array called LOFAR (LOw Frequency ARray) and an observational technique called beamforming to look for radio emissions. A sensor array is like a grid of tiny cameras that each take ‘pictures’ of signals that hit them. Beamforming processes these signals by combining them into one more focused signal

Turner and his team decided to look at three solar systems: 55 Cancri,  Andromedae, and  Boötis. These systems have planets with a mass, age, and orbiting distance from their star that make them ideal candidates for radio emissions. Theoretical models also predicted that these exoplanets would emit enough radio signals that LOFAR would be able to pick them up. Within these three systems, Turner looked for two types of radio emission. The first type, called bursty emission, is a short and fast radio signal that repeats. The second type, called slowly variable emission, is a long, continuous radio signal that slowly changes as time goes on. Because different theoretical models predict both types of emission, Turner decided to look for both.

Turner and his team used LOFAR and beamforming to look at exoplanets in these three systems in 22 separate observations, over a total time of 89 hours. The observations were taken at night, to reduce interference from our sun. They were also spread out for maximum orbital coverage, to observe the exoplanets in as many different orbital positions as possible. This way, Turner reduced the chance of missing a radio emission that may only occur at specific moments in an exoplanet’s orbit.

After the observations, Turner used a data-processing pipeline called BOREALIS to computationally “clean up”  the data from LOFAR. He first removed interfering signals from other stars. Afterwards, he was able to label the cleaned up signals as either bursty, slowly variable, or no emission.

They also found a possibly bursty signal from Andromedae, but it was also unclear.. From 55 Cancri, they did not see any signals at all. This was still informative, because they were able to conclude that any signals coming from these stars must fall outside the limits LOFAR. Therefore,. Turner and his team concluded that radio signals from  Andromedae and 55 Cancri – if they exist – must have a frequency between 26-73 MHz, because LOFAR does not detect signals in this range.

Turner concedes that he needs more data on these three solar systems to make even more precise calculations. However, it is encouraging that the current estimates agree with the predictions of theoretical models. Overall, Turner and his team clearly demonstrate that beamforming is a viable option for exploring exoplanetary magnetic fields. Being able to measure these magnetic fields will allow scientists to more precisely determine the habitability of exoplanets – one more step in the search for life outside Earth.

Tags: Astrobiology, Astronomy, Astrophysics, Big Questions, detection, exoplanets, gravity, magnetism, Science Topics, Space, What is out in space?, What might life look like elsewhere in the Universe?