In the late 1930s and early 1940s, the prolific photographer Walker Evans created candid pictures of people on the New York City Subway. His goal was to photograph passengers at their most honest and authentic. In his own words, he wanted to capture them with their guards down and their masks off.

To do that, Evans knew he couldn’t be noticed; once he’d been seen, those guards would come right back up. For that reason, he developed a unique “undercover” approach. He hid his 35mm Contax in his topcoat with just the lens poking out between his buttons. From there, he attached his shutter to a cable release, which ran through his sleeve and into his hand, which he then tucked into his pocket.

Evans’s rig might be old-fashioned, but his pictures are timeless, and many of today’s photographers strive for a similar sense of invisibility. To capture those truly candid expressions and interactions, one often has to become a fly on the wall, flitting about unnoticed. Here are our tips for keeping a low profile the next time you hit the pavement. 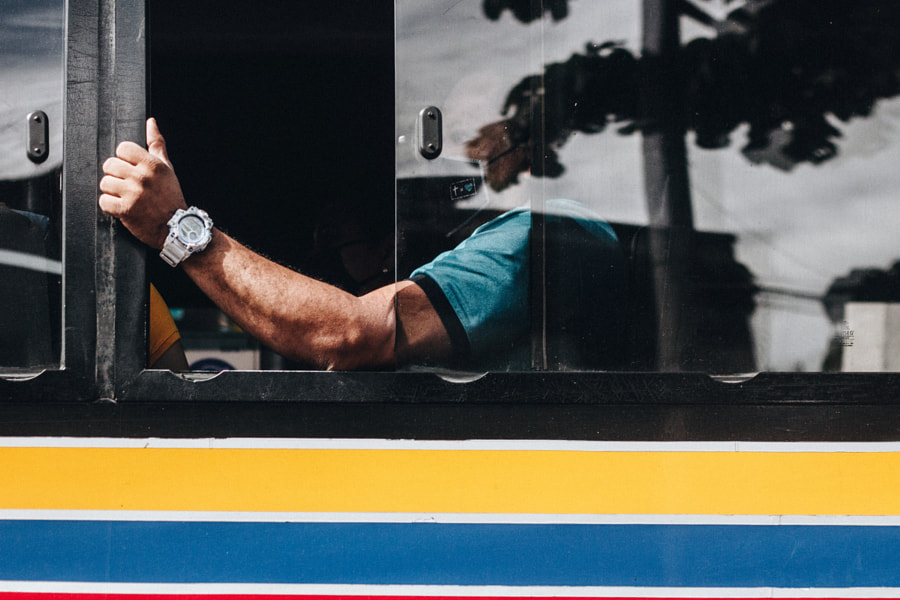 We borrowed this tip from Henri Cartier-Bresson, the father of street photography himself, who used a 35mm Leica, a camera so small it caused him to go unnoticed by other pedestrians. Sometimes, he even covered the reflective metal parts of his camera with black tape to keep it inconspicuous. You don’t need a bulky DSLR if you’re out shooting on the streets; a mirrorless camera is your best bet, and even a simple point-and-shoot could be perfectly adapted to this style of shooting (that is, if you don’t want to invest in a Leica). The key is not to look like a pro, but like an average tourist. 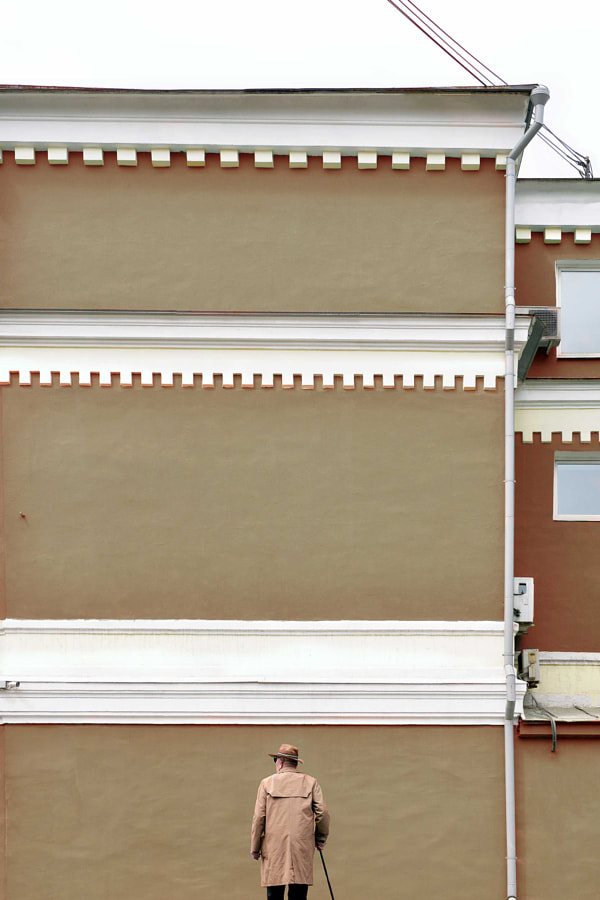 Tip #2: Blend into the crowd

It’s often easier to shoot in crowded areas because the mass of pedestrians serves as a kind of “cover,” but wherever you are, you can take steps to blend into the scenery. To start, wear dark or neutral clothing that won’t attract unwanted attention. Keep your camera tucked away in your bag when you’re not using it, and if you have a mirrorless camera, opt for the silent shutter mode. 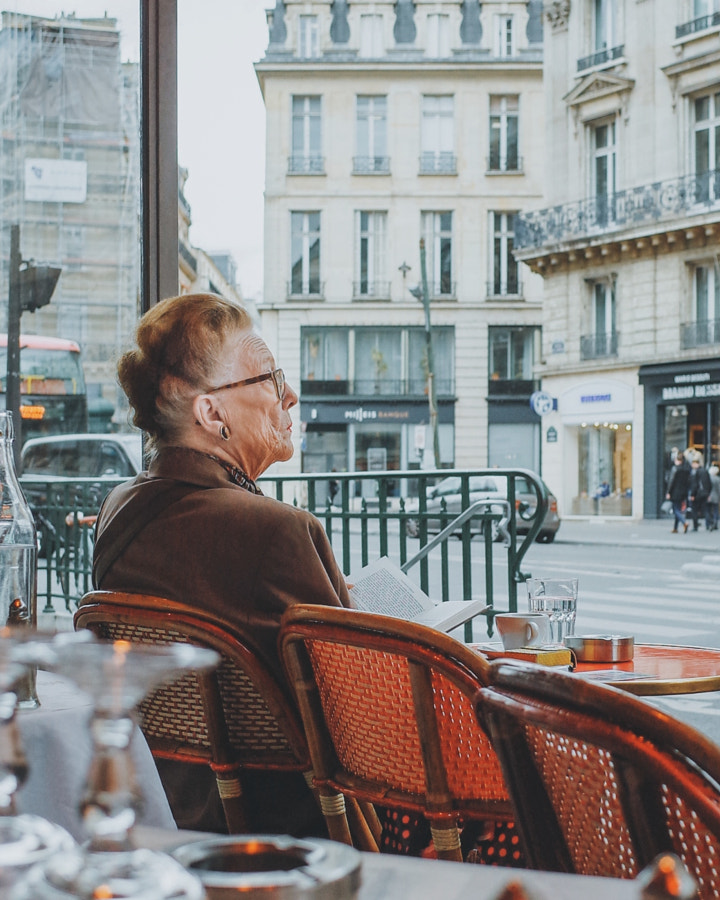 Here’s another lesson from Cartier-Bresson, who famously coined the term “the decisive moment” to describe the split-second in which every element in the frame—composition, light, movement, and gesture—serendipitously comes together to create a meaningful whole. The original French for “the decisive moment” is “Images à la Sauvette,” meaning “images on the run.” It’s an appropriate term: Cartier-Bresson was so quick to react that he almost never gave his subjects time to notice him.

When you go out to shoot, keep your eyes open, and most importantly, stay prepared. Avoid stopping in the street to change lenses; either choose one lens or bring two small camera bodies with two lenses so you can easily switch between the two. Dial in all your exposure settings early so you’re ready to lift your camera to your eye at just a second’s notice. Finally, consider a prime lens; the more you shoot, the better you’ll get at anticipating and visualizing your shots in advance.

Note: These “decisive moments” don’t have to be major happenings or dramatic events. More often, they are fleeting gestures or ephemeral interactions in everyday life. They can unfold on every average street, just around the corner or right outside your local shop. 500px’s current ‘Life in a Flash’ Quest serves as a good illustration of this concept. This tip might seem counterintuitive, but you can move slowly and react quickly at the same time. Someone walking calmly is less noticeable than someone running around in a hurry, so don’t be afraid to take a breath or pause for a while, waiting for the right moment. There’s no need to keep shooting the entire time. Believe it or not, Cartier-Bresson took only about four photos an hour while shooting; this measured and slowed-down approach gave him time to prepare and be ready when the right instant came. 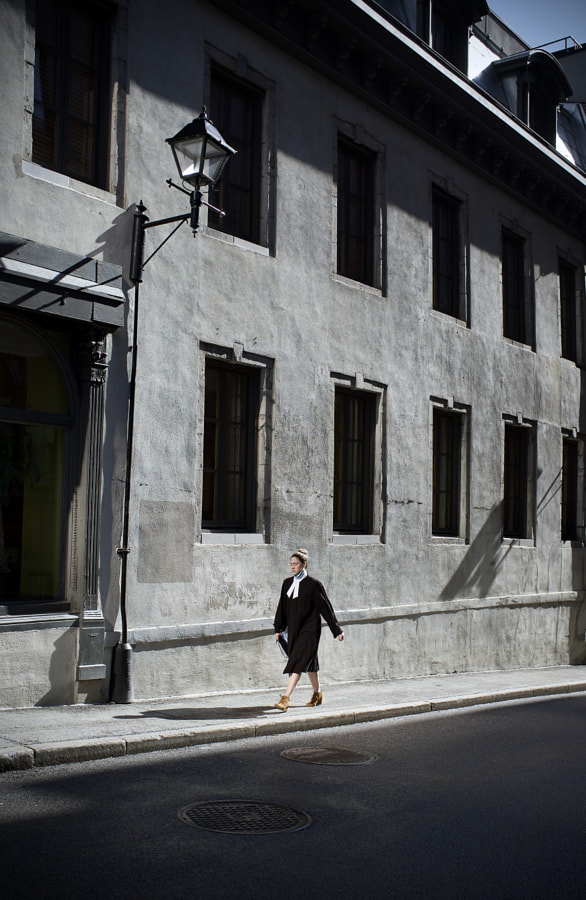 One thing you don’t want to do is hide or sneak up on someone; instead, let them come to you. Stay in the same spot long enough, and you’ll become invisible. Maybe you set up in a restaurant overlooking the sidewalk, or you find a park bench where you have a clear view of passersby. You can even grab a cup of coffee, listen to music, or peruse the newspaper while you wait. You’ll be “hiding” in plain sight. 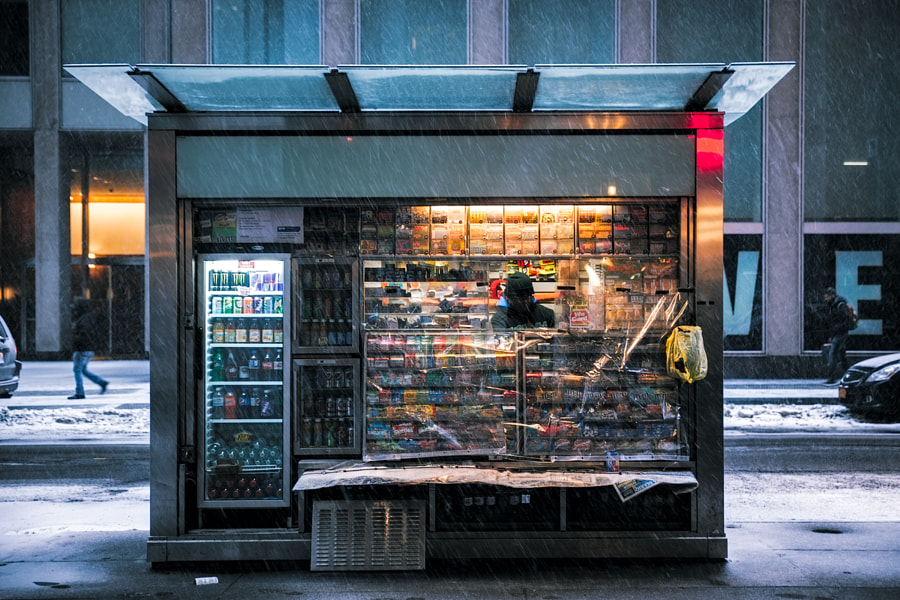 No one likes being watched, so avoid looking directly at the person you’re photographing. Instead, keep them in your peripheral vision, or look just past them on either side before and after taking your shot so they assume you’re photographing something else.

Of course, you can shoot from the hip to avoid raising your camera altogether; just bear in mind that wide-angle lenses are more forgiving when using this method. Another trick some street photographers employ is taking a photo and keeping the camera at their eye until the subject passes; most people will just move on with their day. Tip #7: Resist the urge to chimp

It’s understandable to want to look at your LCD screen right away to see if you got the shot, but that’s a clear giveaway that you’ve just taken a photo. Plus, wasting your time looking at images you’ve already taken could cause you to miss another moment that’s about to happen. Wait until you’re alone to check out your images, and if you find you’re having trouble, consider shooting on film or turning off your camera’s automatic image review function. 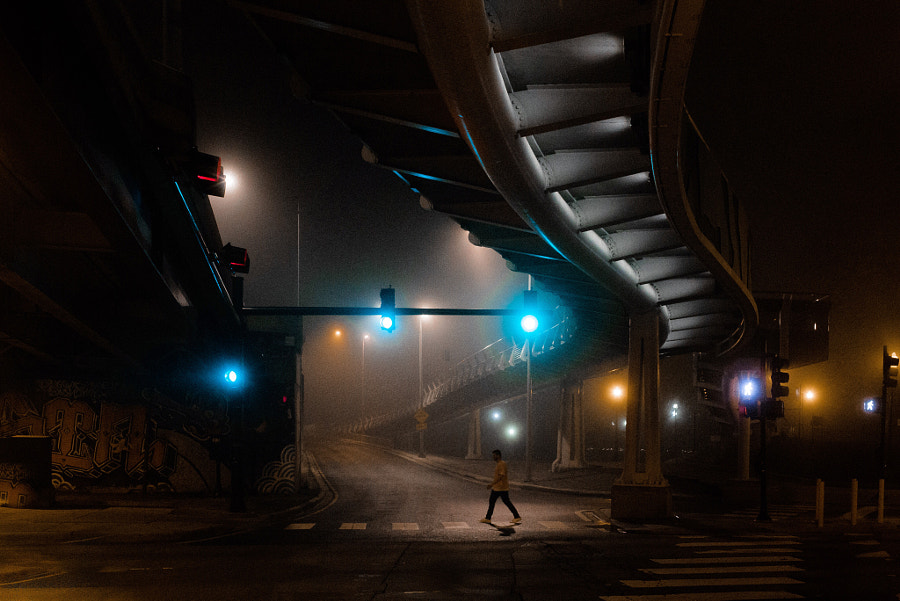 If you’re tense, chances are people will notice, so keep your movements fluid and relaxed. Hold your camera gently and remember to breathe. Stay nimble and light on your feet. Listening to music can also be good for calming the mind and body. In many countries, including the US and Canada, you have the right to take photos in a public place, so you don’t have anything to hide or worry about. In the age of smartphones, most people are used to seeing cameras everywhere anyway, so many won’t give it a second thought. 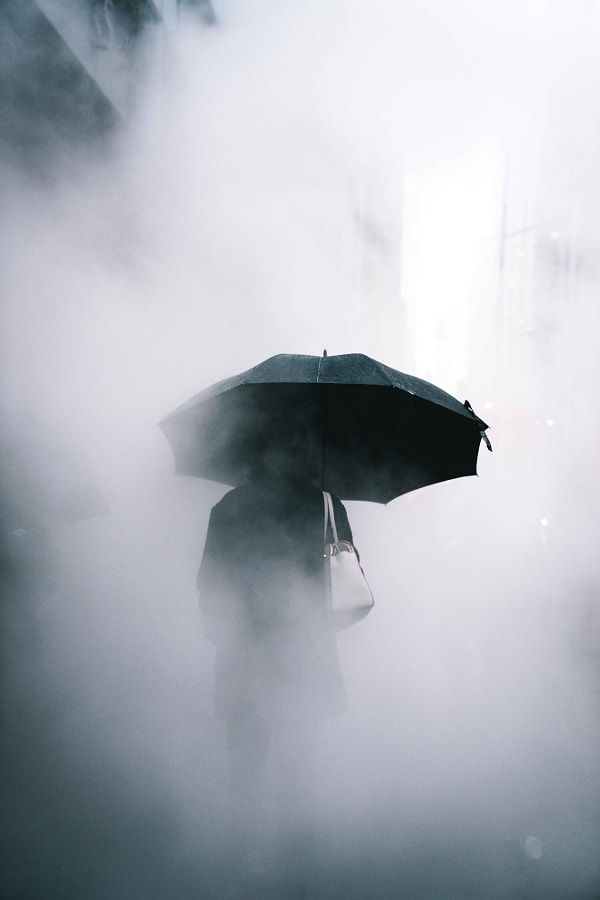 Yes, you read that right. On rainy days, people are in a hurry, so they pay far less attention to what other people are doing. As long as you protect your gear, you should be good to go; you can even stand under an awning and wait for people to pass into your frame. For handy tips on shooting in the rain, check out this article.

Being inconspicuous does not mean being creepy. If someone asks you not to take their picture, respect their boundaries and move on. If you get “found out” while snapping a picture, a smile goes a long way. If you’re approached, be honest. Explain that you’re a street photographer and you found them interesting. You can even give them your card and offer to send a print. Not all street photos are completely candid, either; if someone notices you, they might be open to collaborating for a street portrait. Stay calm, and whatever you do, treat others with kindness. 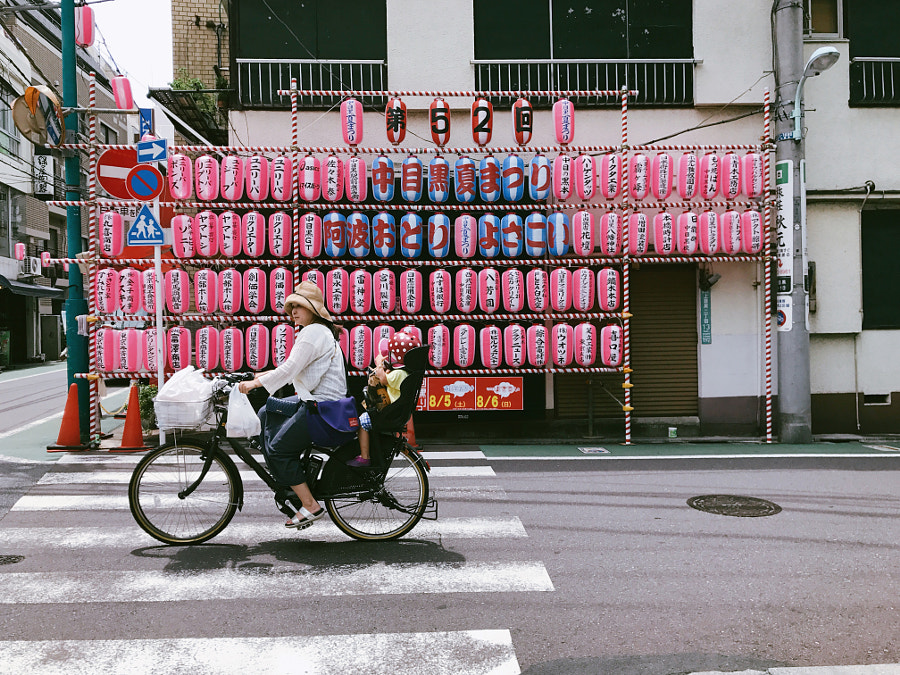 We started this article with an anecdote about Walker Evans, so perhaps it’s only fitting we should end with one too. During those years he spent shooting the NYC Subway, he often brought along his friend and fellow photographer Helen Levitt, convinced that he’d be less obvious if he wasn’t alone. It worked back then, and it still works today, so consider teaming up with another street photographer for a day of inconspicuous shooting.

Not on 500px yet? Sign up here to explore more impactful photography.