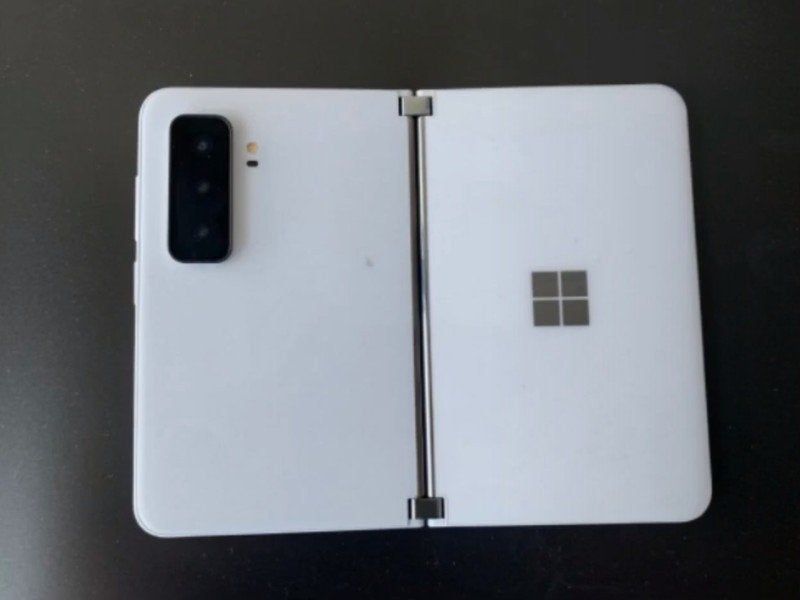 Microsoft is rumoured to be launching a second generation Surface Duo 2 dual-screen phone, and now we may have gotten the first look at the foldable Android device.

Images of what may be a close-to-final prototype of the device have emerged, showcasing a similar hinged design to its predecessor, but with an angular camera bump with three sensors.

The images published by Windows Central on Monday show what’s believed to be an ultrawide angle, telephoto, and standard lens as part of the array.

Renders show we could get a black and white version of the device this time around, while other aesthetic changes could see a frosted glass casing. According to the images, the USB-C has shifted slightly, while the fingerprint sensor may now be integrated into the power button.

According to the report, Microsoft is planning to give the sequel device a much-needed hardware boost. The modest specs of the original were off-putting despite the advances made by the form factor. Hopefully the price tag will be a little more modest this time around too.

According to the report, this time around it will pack the Snapdragon 888 chip, 5G connectivity, as well as NFC for mobile payments and such. The report from Windows Central says Microsoft is planning to launch the device in September or October this year.

In that case, we’d expect the device to arrive rocking Android 11 with a quick path to Android 12. Hopefully, Microsoft has plans for a wider rollout off the bat, as the first device took months to months to reach the UK and had lost much of the steam by the time it finally became available.

Would you be interested into a Surface Duo 2 if Microsoft boosted the specs to rival other flagship devices on the market? Let us know @trustedreviews on Twitter.