Overtourism in Japan has led the locals to coin a new phrase: kankō kōgai, or tourism pollution.” ~ Alyse.

What caused overtourism in Japan? How has it affected the local way of life?

Let’s talk about an elephant in the room. In recent years I’ve been questioning if people were beginning to travel backwards… By backwards I mean, would you visit a place to “say you’ve been” without actually knowing what’s there? Are you happy to be blissfully unaware of a culture different to your own? Unfamiliar with the awe-inspiring things to see and do at your destination?

Well, many travellers to Japan seemed to be planning their travels that way. After all, Japan was THE destination of the moment! You just needed to take a look at the images floating around on social media platforms to see this and the hype it created, urging more people to visit.

I first published this article in June 2018 before other major publications caught on to this worrying trend, and have updated it since. The issues I discuss below are not exclusive to the Land of the Rising Sun, but I wanted to highlight some major changes to tourism in Japan I’ve seen in recent years. We need more visitors to understand the traits of responsible tourism and how to avoid looking like a tourist.

If you’re interested in learning how tourism pollution affected Japan and how you can help solve it in future, read on for more!

In 2018, I noticed a disturbing trend sweeping online travel groups and forums: People were booking flights to Japan unaware of exactly WHY they want to go.

Questions popping up in these groups frequently included, “Booked tickets! What things can I do there?” and “Going next week, what cities do I visit?” and this had me quite concerned. It seemed a bit backwards, considering the things to do and places to stay would normally be the huge drawcards to a destination.

I’m aware this is going to sound ironic coming from someone who shares itineraries to help others travel, but I do worry about overtourism in Japan.

The issue here is if these spontaneous ticket-bookers weren’t aware of simplistic things like attractions to see at their destination but are just going to say “I’ve been there!”, how can they be expected to know (or care) about more complex behaviours like customs and etiquette in a country that hold these things so dear? 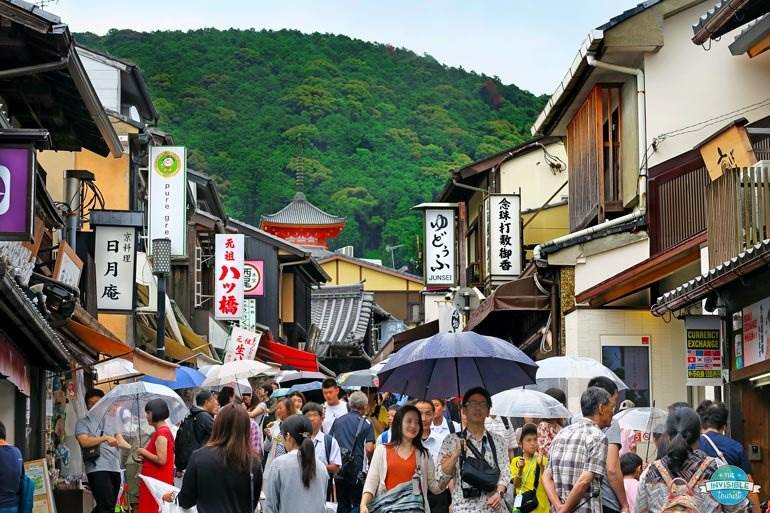 Concerns about overtourism in Japan

Overtourism in Japan has led the locals to coin a new phrase: kankō kōgai, or tourism pollution. This revelation spills over into me asking more questions:

Will Tokyo be the next Rome? Streets littered with rubbish and noisy tourists drowning out the local culture? A false backdrop to the famous buildings and structures that proudly adorn the streets and alleyways as a marker to their ancestors’ ingenuity, power and successes?

Will Kyoto be the next Taj Mahal? The peace and tranquility of this 17th century wonder stomped out by the busy hustle and bustle of large groups of people, the serenity and ambiance punctured by selfie-sticks?

It is no secret that Japan is a fiercely mono-ethnic nation, with incredibly low levels of immigration and external cultural influence. In response to an ageing population they are planning to use robots to fulfil the gaps in the labour market, not by bringing in outsiders.

Whether you agree or disagree with this general sentiment is not relevant, we can all agree on the fact that Japan has an extremely unique and rich cultural heritage and they are in no hurry to water this down, or blend it in any way.

It is also obvious that tourists are fascinated by this culture (despite not having much of an understanding about it) and flocked to the island nation in their millions. In 2014, Japan received over 13 million inbound visitors. That number skyrocketed to almost 32 million just five years later.

By 2020, the Japanese government hoped to welcome 40 million visitors for the Tokyo Olympics – that’s over 25% more tourists than the 28 million that visited the island nation in 2017 alone.

From what I can see Japan doesn’t need more tourists, it needs more mindful tourists. 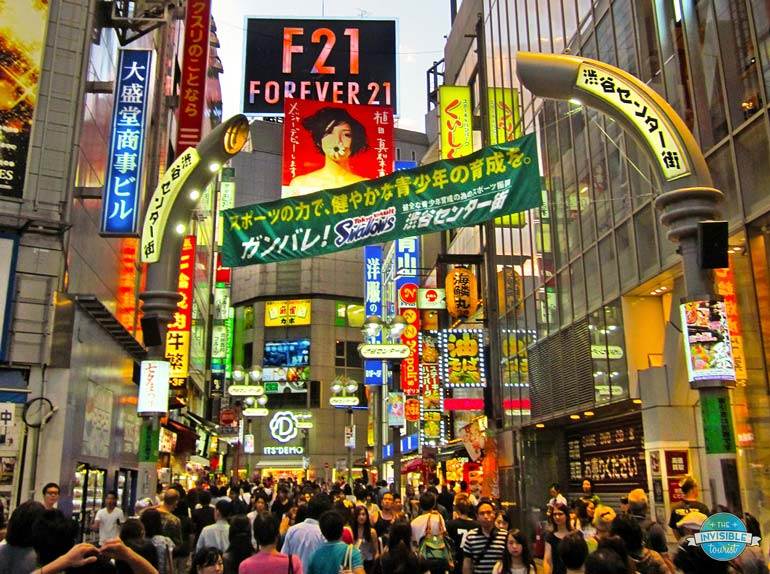 3 Weeks in Japan Itinerary: Sights & Culture Off the Beaten Track

Why You Shouldn’t Use Airbnb: 8 Troubling Issues You Didn’t Know

Stunning Places to Discover in Japan Off the Beaten Path

Examples of tourism pollution in Japan

With the influx of visitors to Japan since 2015, it became clear that a majority of tourists had no idea or respect for the local customs. It seemed many issues stemmed from tourists being disrespectful in order to gain validation on social media, which contributed to serious issues such as tourism pollution. For instance, here are some negative impacts of tourism in Japan:

These centuries-old streets were not designed to cope with that many people at once. Tourists were too busy trying to shuffle past one another that no one was venturing into the local businesses lined along the street. 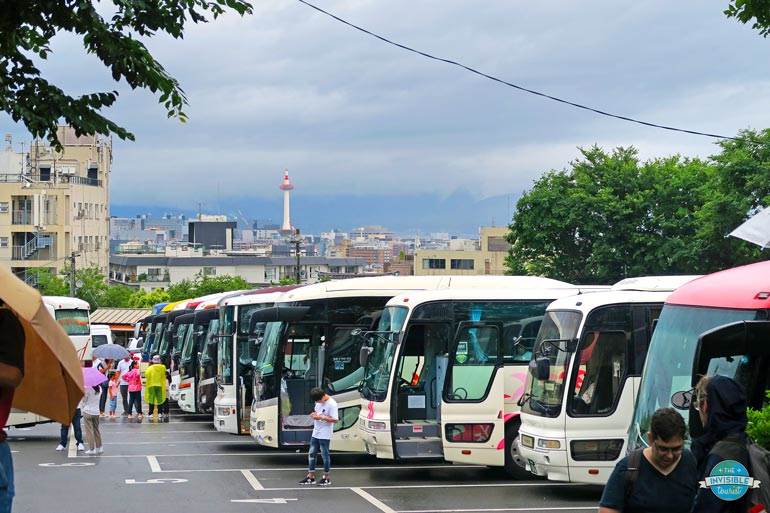 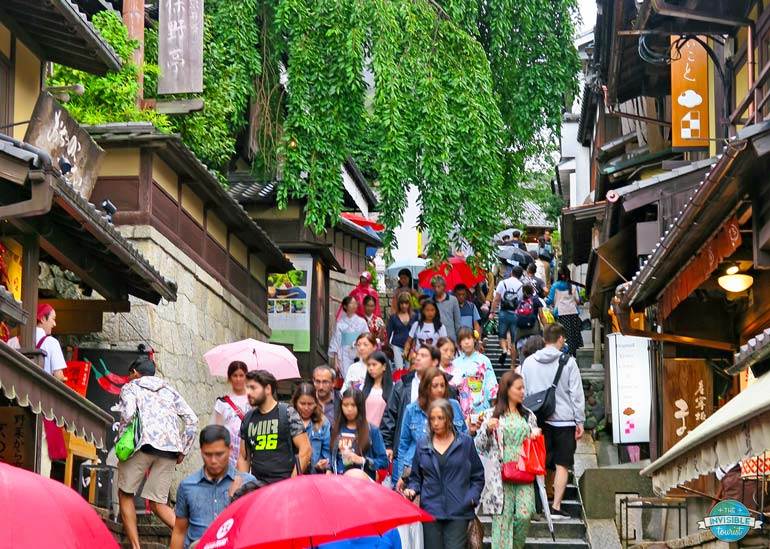 Overtourism issues in other areas of Japan

I could go on and on but by now I’m sure you understand what I’m getting at here. It is SO crucial to know the do’s and don’ts when visiting Japan to avoid contributing to the above problems.

What on Earth are these tourists doing except destroying the very things they love? Do they not realise their individual actions do have a huge impact?

Must-Have Snacks from Japan You Can’t Return Home Without

Best Japan Travel Books Guide for All Types of Travellers

Is Klook Legit? What You Need to Know Before Booking

What happened when tourists stopped coming to Japan?

As we’ve examined above, overtourism can cause a number of issues for locals and significant attractions. But what happens when the tourists stop coming and the opposite – undertourism – occurs?

The below list doesn’t take into account the many small businesses who have faced hardship and involuntarily closed over the past year. While the following closures of well-known businesses may not be solely due to a lack of tourists, they have unfortunately all occurred since March 2020.

Closures of well-known businesses in Tokyo

Other impacts due to a lack of tourists throughout Japan

The negative impacts of a lack of tourists is beyond unfortunate for everyone. Once international tourism resumes in Japan, is there a way for visitors to strike a balance and avoid overtourism issues in future?

Why be a sustainable traveller: The bigger picture

Some people understand and respect the need to maintain the natural beauty of locations. This is why we have seen such a surge in eco-tourism in recent years. But what about the beauty and significance of the culture of a location? Have we been thinking enough about the impact that tourism has on this? If we don’t, we run the risk of destroying the very reason people will want to visit (a direct parallel to the perils that eco-tourism strives to avoid).

This insight that I’ve had – that respecting cultural customs, peoples and communities, and in essence behaving like an “Invisible Tourist”, was one of the main drivers behind me starting this blog. Seeing what is happening in Japan is heartbreaking, as the Japanese have the highest level of respect towards one another and the natural world. Respect is beautifully intertwined within all aspects of their lives.

As a child I remember learning, “look but don’t touch” when exploring ancient stalagmites in a cave. “But Dad, what does it matter if I just touch it once?” I recall asking. “If everyone did that, there would be no stalagmite for you to look at now” he replied.

This is a lesson I have tried to apply to the way we approach tourism in general – blend in, show respect, learn their language (to the extent you can) and understand the way the people there live. If you do that, you won’t destroy it for the next generation.

This why I am super passionate about being “invisible” and encouraging others to do so, much like the “Leave No Trace” ethics that promote conservation when travelling outdoors. I’ve even dedicated an entire article about how we can still travel and avoid contributing to overtourism issues to try and help spread the word about sustainable travel.

The Venice of Japan: Amazing Things to Do in Kurashiki

10 South Korea Travel Tips to Avoid Looking Like a Tourist

Ways to avoid contributing to overtourism in Japan

I’m in no way suggesting that everyone should just stay home and never bother seeing our wonderful world, as this will not really benefit anyone. We can, however, be more mindful about how (and why) we travel and try to do our absolute best to minimise our tourist footprint on local communities of the places we visit. Here’s a few ways:

If people spent as much time researching their travels as they did posting endlessly on social media about what they ate for lunch or without really knowing about what it is they’re sharing, tourism pollution would be on its way to being a thing of the past.

Travelling opens our minds to new ideas, cultures, beliefs, and ways of doing things. In saying that, what is acceptable to do at home may not be acceptable to do in a foreign place. Even something like walking the streets of Tokyo chowing down on some sushi will be frowned upon. Remember when travelling in Japan (or anywhere), you are a guest and it’s important to respect your host and their home.

Be a rebel by travelling in a way the majority aren’t! It’s all about having respect and learning the do’s and don’ts before you go.

What are your thoughts on this? Is Japan’s strong sense of cultural identity slowly being eroded away by overtourism? Have you seen tourists behaving badly in Japan or elsewhere? Is tourism pollution affecting your local community? Let me know!

If you’d like to learn how to be an Invisible Tourist in Japan (or anywhere in the world!), take a look at my travel guides and itineraries that are tailored to specifically to help you do so 🙂 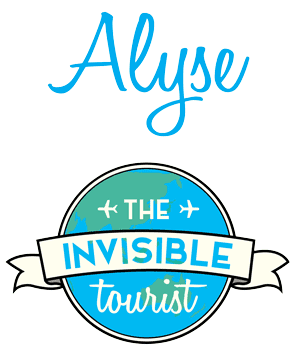 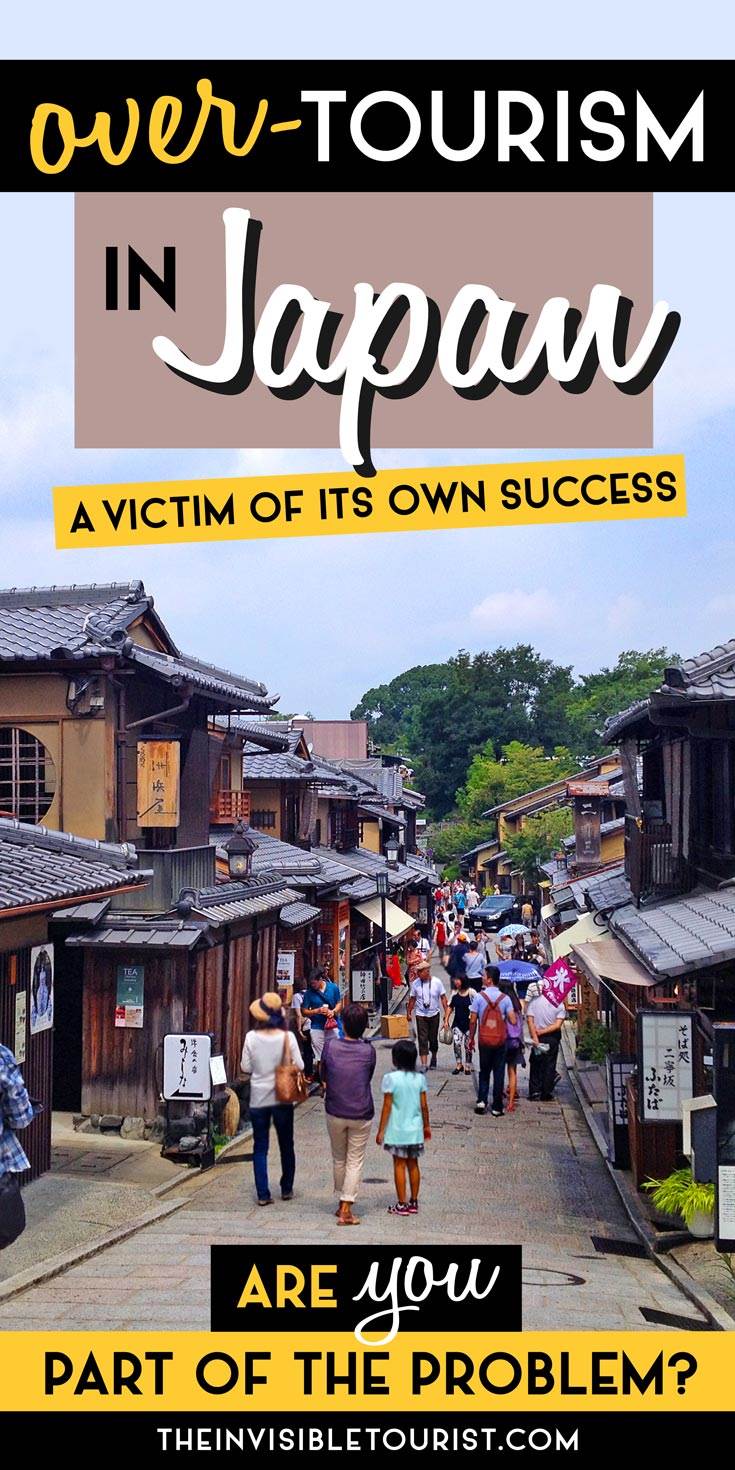 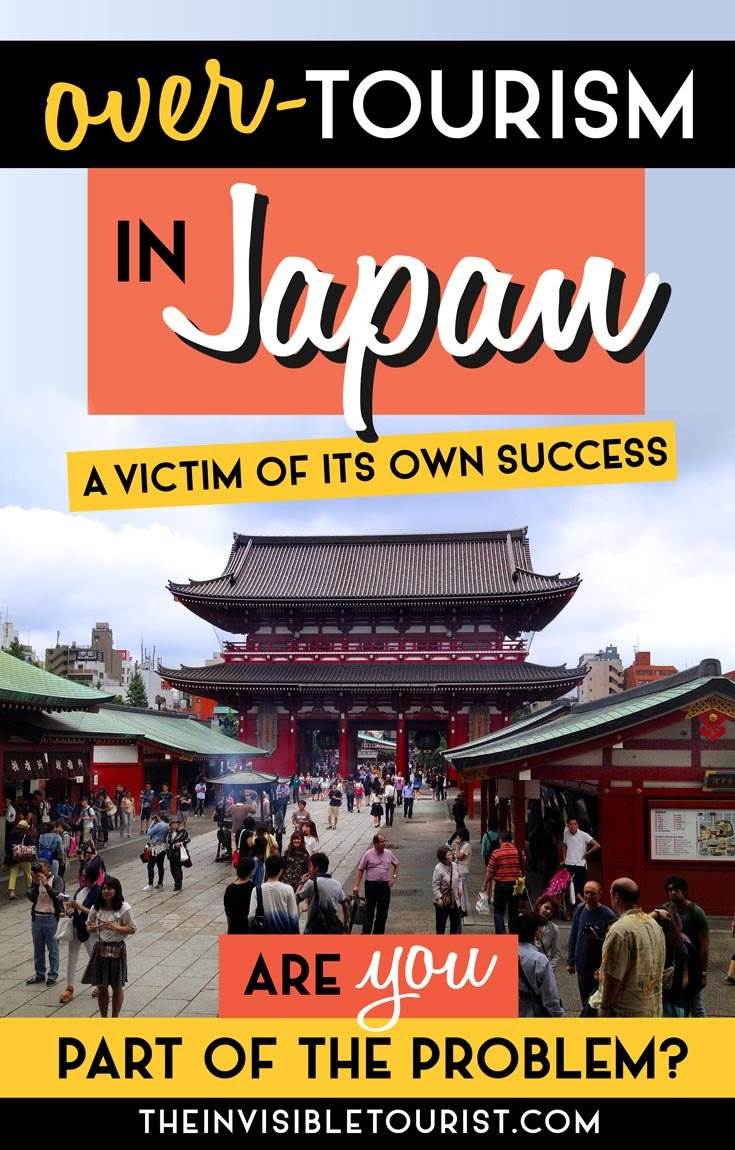 This guide to overtourism in Japan may contain affiliate links, at no extra cost to you. I may make a commission if you decide to make a purchase through these links and if you do, thanks for your support! This goes towards the costs of running my blog so I can keep my content free for you. As always, I only recommend products and services that I genuinely love and use myself!