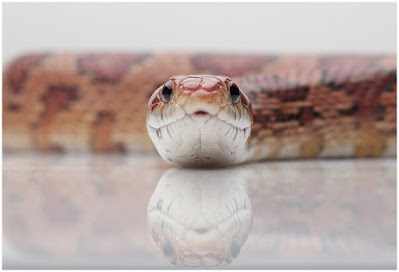 When lighting with small subjects, a speedlight is generally all you’ll ever need. Further, because of the scale and distances involved, even with a small flash you’ll be working at low power settings.

For these photos of some of the resident animals at the Howard County Conservancy, we used a single speedlight generally at one-eighth power, and let the environment of the impromptu studio to the rest of the heavy lifting for light modification.

Find a local org and adopt it as a photographer. I have been working with The Howard County Conservancy for ten years now, and it has been a wonderful experience.

Sadly, I am not exactly in a position to be able to fund their whole endowment. But I can create visuals that will help to further public understanding. And which they can also leverage to increase their base of donations.

Our ongoing collaboration has yielded a steady stream of wonderful and unique experiences that I would not otherwise have had.

So find something to team up with: a conservancy, a pet adoption center, your kid’s school — something. It’s a win-win for both the organization and for you as a photographer.

For this shoot, that meant getting to be up close and personal with a neat collection of animals. (Fun fact: because of the distances involved, I have discovered it is often easier to follow-focus an NFL wide receiver than it is an excited turtle — a turtle!)

I even got to pet an owl. 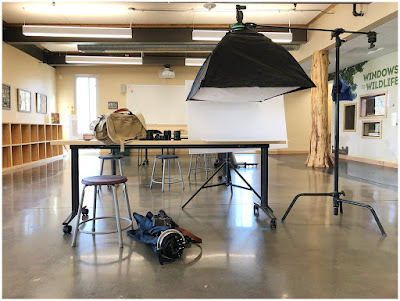 First, the ambient light was removed by shooting at a low ISO, fast shutter speed and moderate aperture. Which is to say, without flash these photos would have been black.

(So all of the light for the reptile photos came from just the one speedlight.)

Here’s the setup. I put the speedlight, a $69 Godox TT600, in a medium soft box and boomed it over a table. For the size of subjects we’ll be shooting, this is essentially a giant ceiling of light.

As a result, we’ll get nice, wrapping diffused highlights and creamy speculars on Maize, the Conservancy’s resident corn snake.

Our table-top surface will be a sheet of milky white plexiglass. This will help both by being a bounce reflector and by giving us nice “Apple cover flow” reflections as a graphic element.

(To get this look, you have to split the plexi with your lens position — i.e., the bottom of your lens hangs just below the edge of the plexiglass.)

Our backdrop is a sheet of white foam core, “A-clamped” to a light stand. Nothing but the best for our reptile studio.

This combination will give us beautiful, nice, even coverage on our subjects. On a small scale, it’s basically the future-room Stanley Kubrick set from 2001: A Space Odyssey. This light is suitable for a wide variety of tonal surfaces. 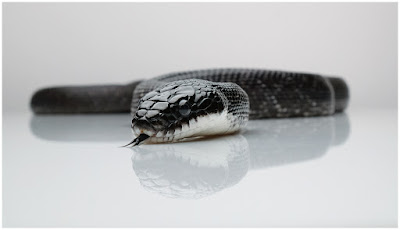 Here’s Onyx, whose dark tones are given texture by the large specular reflections. Design your light right, and the rest is easy. 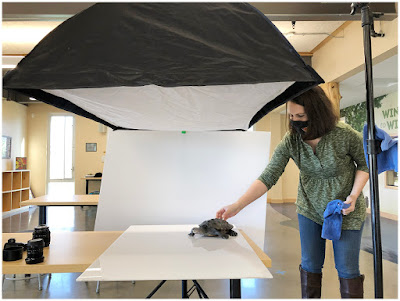 The snakes were pretty chill. The turtles? Not so much.

We photographed a couple of turtles over the afternoon. As seen above, Tabby Fique, the Dr. Doolittle of the Conservancy, would place a turtle on one side of the shooting area, upon which the turtle would immediately haul ass to the other side.

Turtles get a bad rap with respect to speed. Those little guys can move.

But every now and then, they would be considerate enough to stop for a moment and pose: 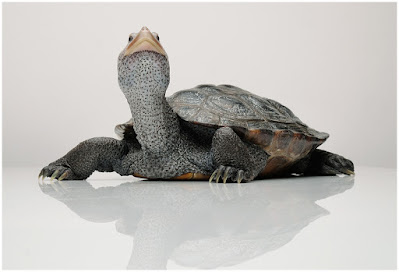 All in all, generally a very fun day. You can see larger versions of some of the animals we photographed by clicking on the combination pic below. 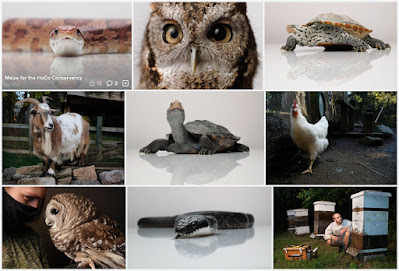 I’m lucky enough to be at a point where all of my assignments, commercial or otherwise, are self-generated. But whether you are a pro, an amateur, or somewhere on the continuum in-between, please consider generating your own mini-projects as you go.

They are loads of fun, you are often completely in the driver’s seat, and it is pretty easy to create a win-win situation for all involved.

This post was published as part of the Strobist Lighting Cookbook.

Fujifilm X-Pro3: Getting the film experience with digital

WidsMob Portrait Retouching Software – Results that Blow your Mind Away! –