Just about every toddler has a first obsession.  For me, it was dinosaurs.  For others, trains, elephants, monkeys, the solar system, bugs.  For my son, it is sharks.  He is out-of-his-mind, in deep love with sharks.  So naturally, as a photographer, I started dreaming up ways to capture this important phase of his childhood. Through each of these “photography projects,” I use the creative process and ultimately grow my photography skills.

Here’s what happened this time and how you can do similar creative shoots.

At some point it hit me!  That $65 shark costume my husband and I bought him for Halloween this year would make the perfect prop–significant particularly because he picked it out himself.  I love to shoot with props that are personal.  From that point on, I could see the shoot in my head.  And this was the first time that I’ve tried to build a shoot from such a specific pre-visualization.  If you haven’t tried to do this yet, I definitely suggest it.  Not only was it fun, but it also pushed me outside my comfort zone–never a bad thing.

I agonized over the shade of Savage Seamless paper to chose.  I knew I needed blue Savage Seamless and ended up ordering a sampler.  But in an attempt to save a few dollars, I bought a 53-inch rather than a 107-inch.  This proved to be a time-consuming mistake–more about that later.  I spent a few days cutting fish, far too many fish (oopsie).  It took me a few hours to hang them from the ceiling.  I thought about sticking them to the drop to eliminate issues with shadows, but I saw him standing amongst the fish, not in front of fish stuck to the backdrop.  So I strung them up and started to think about lighting.

My main concern with the lighting was the fish throwing shadows on the backdrop.  My first thought was to have the main light to directly the side, and the fill flash out front at a 45 degree angle.  This worked to eliminate the shadows, but it had the unintended consequence of causing some of the fish to look flat against the backdrop–the exact thing I was trying to avoid by hanging the fish rather than sticking them to the background.  Check out how flat the fish look here: 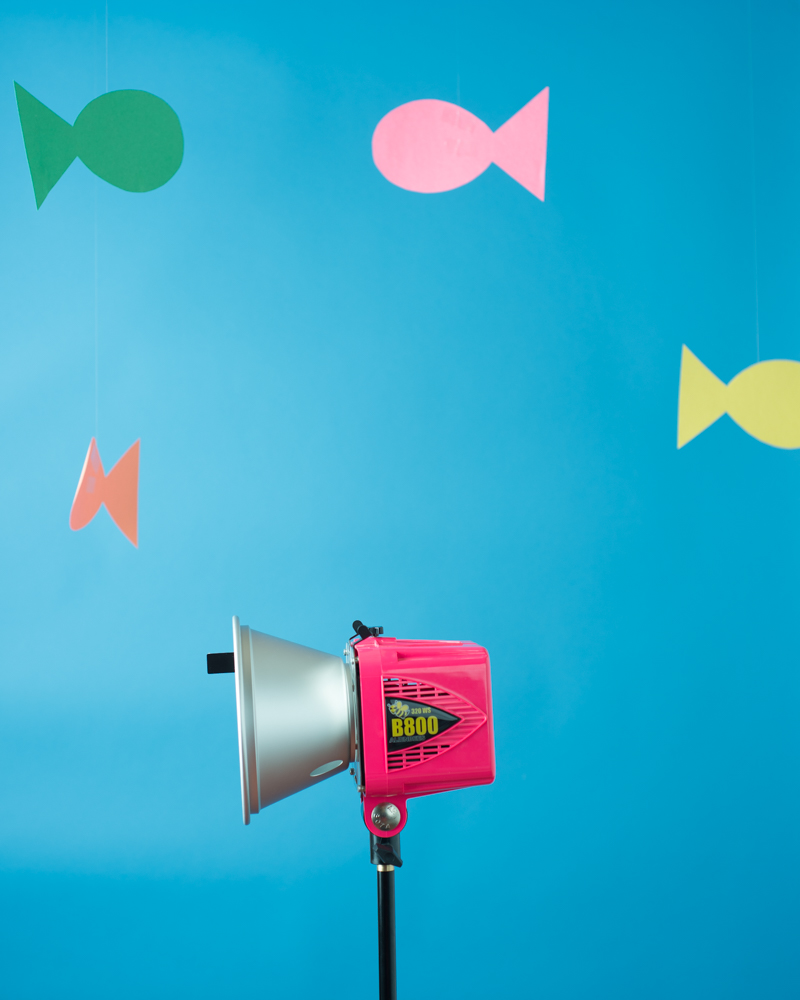 Because rim lights can separate a subject from the background, I figured I would give that a whirl with my fish.  My instinct was that the light shooting from behind would both eliminate shadow issues and create some depth.  But there were a few challenges.  First, I don’t have the best modifier to control the light for something like this.  To properly spread and control the light, the best modifiers would have been large stripboxes on either side of the drop.  Instead, I used what I have–two reflector dishes.  Not ideal.  I positioned them on either side of the backdrop, about five feet up, pointing toward the center and slightly down.  I used a 47 inch octabox to camera right as my key light. 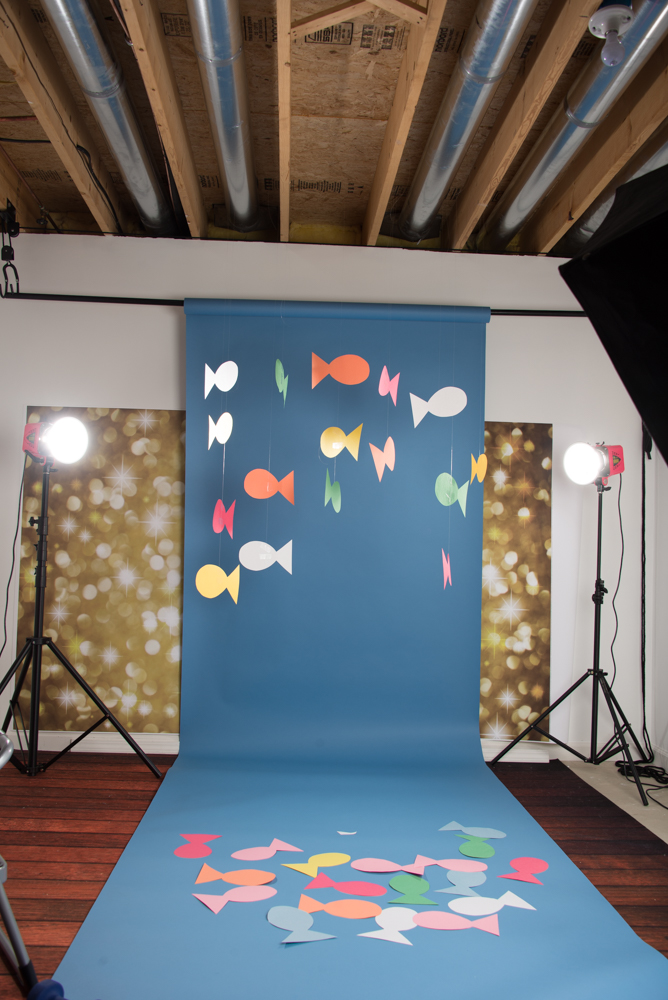 And here is my test shot, with the shark costume hanging on a light stand, about the same height as my toddler.  Note the tiny rim of light around some of the edges of the fish and the edge of the costume. 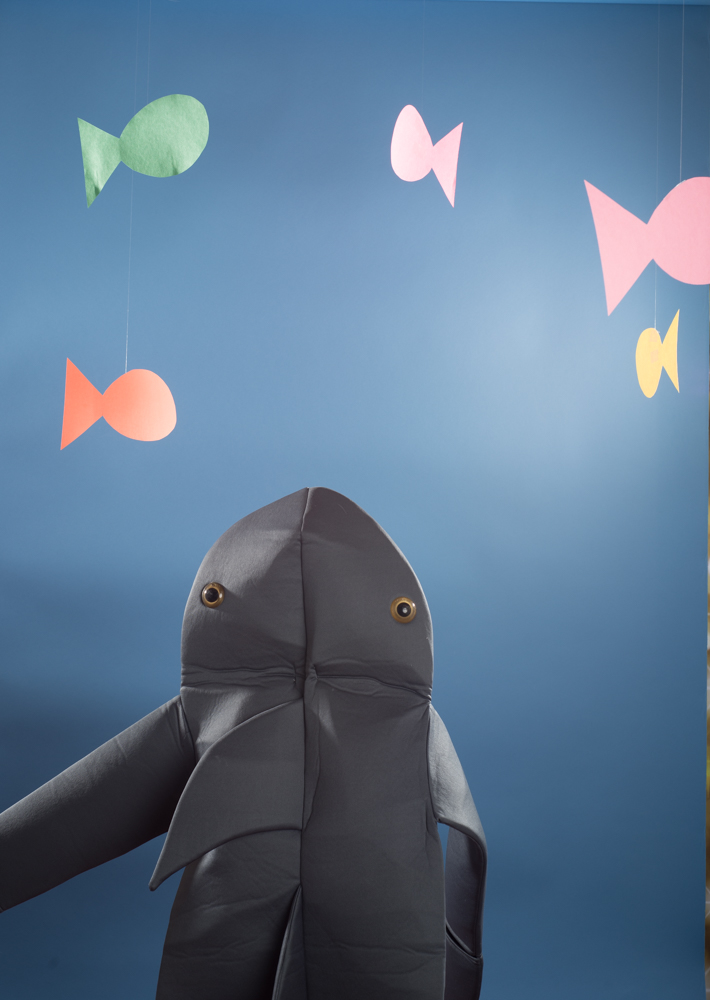 Here is a close-up of one of the fish, so you can really see the little rim of light.  That tiny rim makes all the difference for adding dimension. 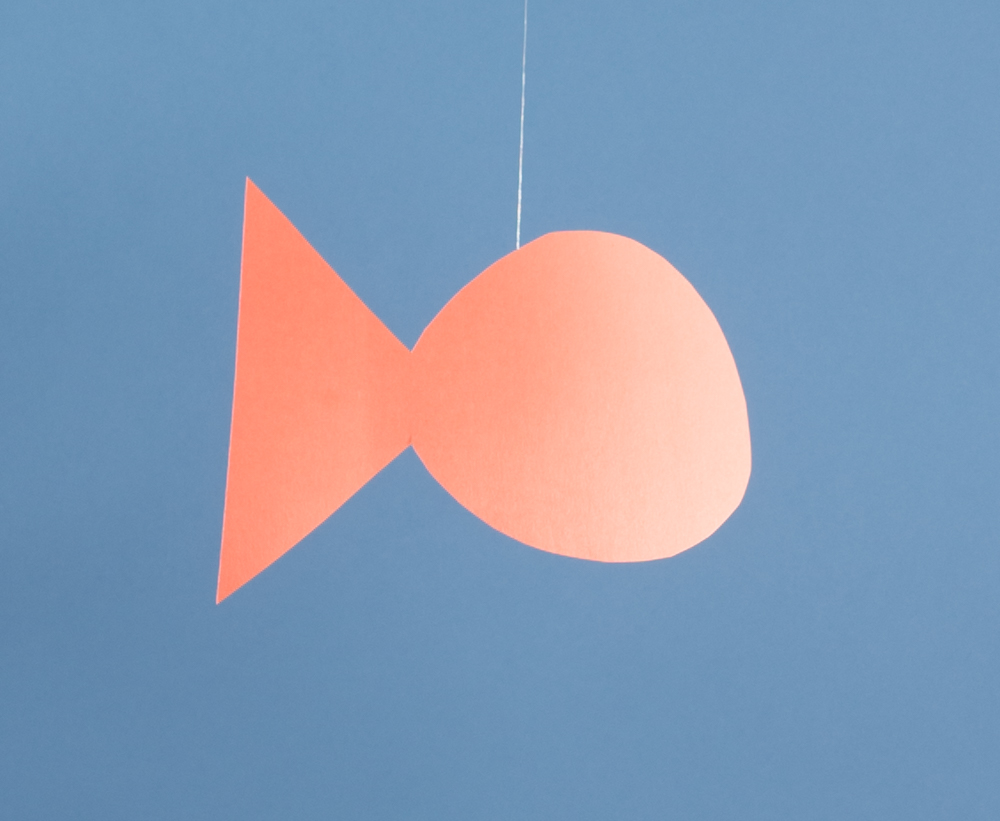 Now the shadows ceased to be a problem and the fish retained their depth, as opposed to looking stuck to the background.  The second issue I could see was that the setup would not be forgiving for a fidgety toddler.  I tend to light children this age a bit flat, because you never know where they are going to roam off to, and you generally want the light to look nice regardless of where they wander.  So, I put a mark on the floor for him to stand on, and hoped for the best.  I was willing to accept some undesirable shadows when he moved out of place, in exchange for the depth added by the rim light.

I adore the results I got from this shoot, but I made a few mistakes that left me working for hours in Photoshop.  Remember that choice to purchase the less expensive seamless?  I had to do a LOT of patching around the edges of photos–a painful process that even MCP Actions could not help with.  So, trust yourself with decisions like this.  I knew that drop was a bad idea…I wish I would’ve listened.

So after some painful Photoshop, this photo: 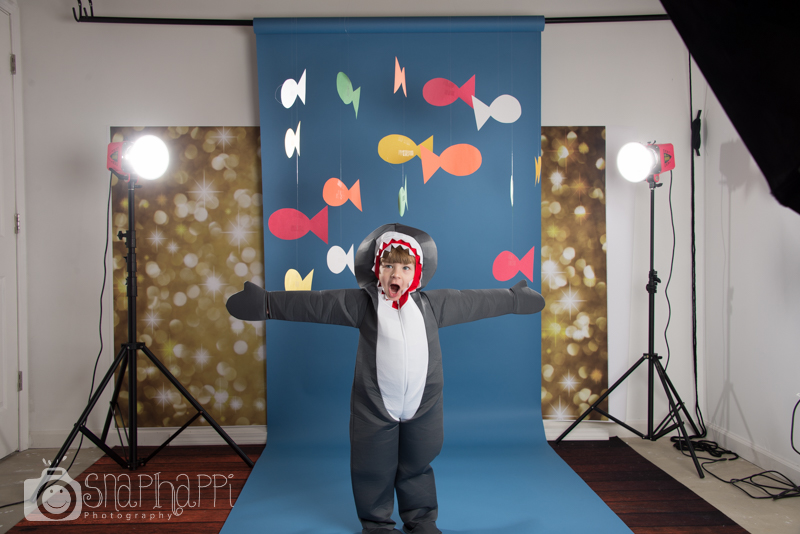 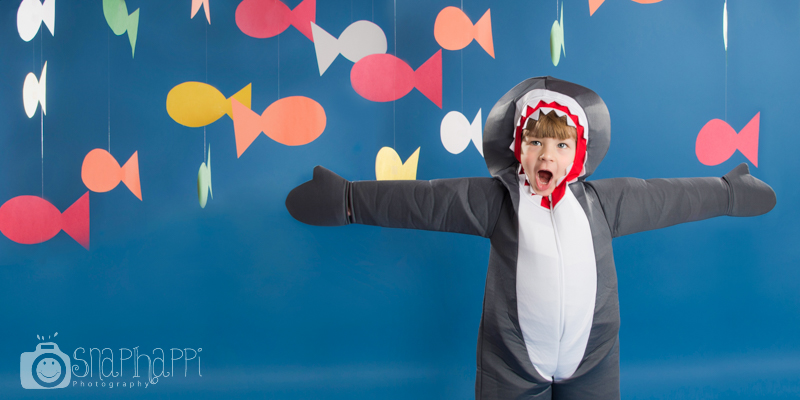 The second issue was that I had not planned to have him sit.  The fish were hung for his height while standing. And my little shark decided to plop down with his books.  It was cute and I kept shooting, although I knew most of the fish were too high to for how I wanted to compose my shots.  This left me with some compositions that seemed uneven.  I had to cut a large section of backdrop out in Photoshop and move the fish down into the empty space.

So again, after some wrangling in Photoshop, this photo: 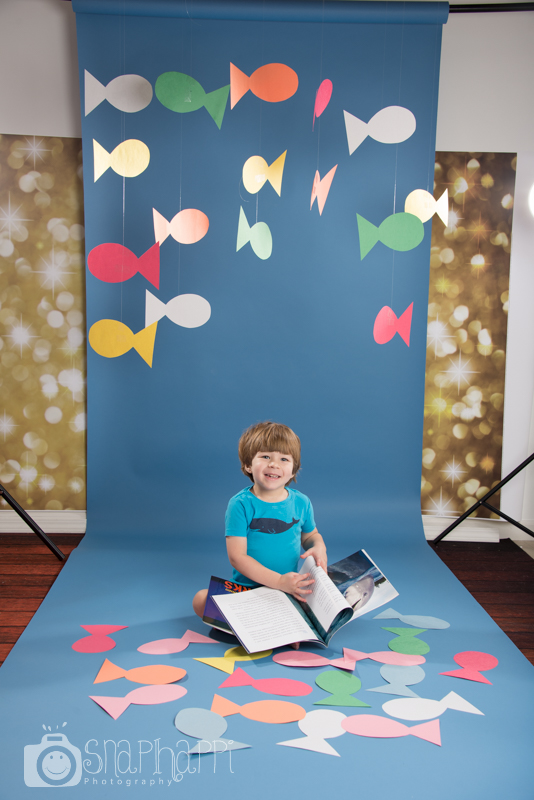 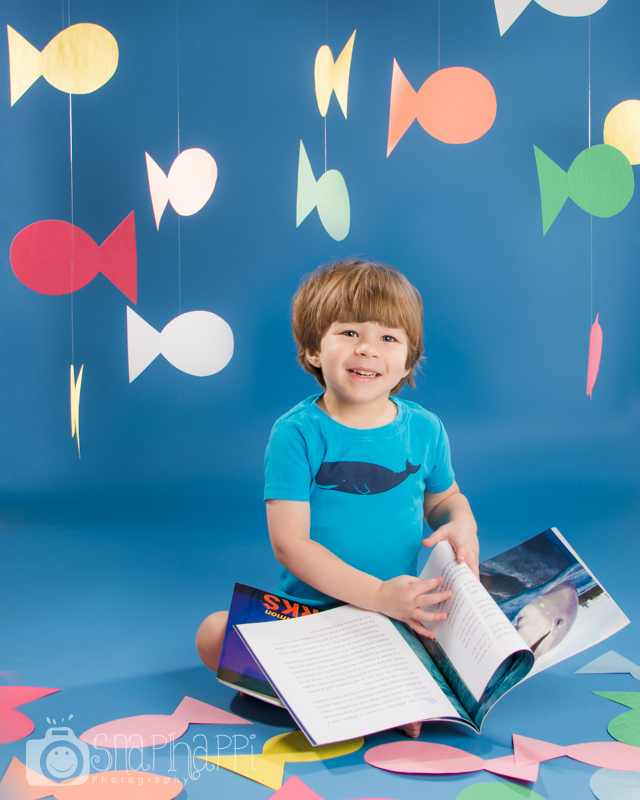 The easy part of the post process was that after all the cutting and patching, I used Baby Steps Pick Me Up (Pop) to get the colors a bit more vibrant.

Working on this shoot was so much fun, and it pushed me to grow in order to solve problems.  Conceptualizing the shoot adds a different dynamic to the process.  So, next time you get a hair-brained idea about a shoot, try it.  Jump into the creative process head first.  You may learn some new tricks and you may love the results.

Aubrie Wancata owns Snaphappi Photography, and she specializes in capturing the joy of childhood through custom portraiture.  She provides newborn, toddler, and child photography to families in Cleveland, Ohio.  You can view her work at www.snaphappiphotography.com and on Facebook.

Where The Green Meets The Blue

Lightroom vs Photoshop: Which One Should You Use?