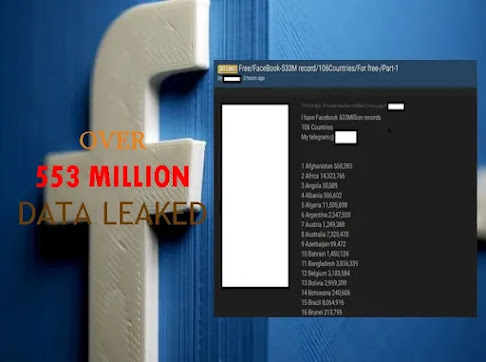 California, April 3: In another incident of an online data breach, the data of as many as 553 million Facebook users have been posted online. Reports inform that the data that has been created public includes details like phone numbers, Facebook IDs, full names, Locations, Birthdates, Bio’s and even email addresses of some users. Over 32 million accounts in the US, 11 million in the UK, and 6 million in India were leaked.

Once Facebook was contacted for clarification on the data leak report, the firm’s spokesperson told media channels that the data was scrapped because of a vulnerability that the corporate patched in 2019. “This is old data that was previously reported on in 2019,” a Facebook spokesperson told The Record. “We found and fixed this issue in August 2019″, the report added.

Even though the leaked data is couple of years old, it might give valuable data to cybercriminals, said Alon Gal, CTO of crime intelligence firm Hudson Rock who first discovered the leaked data online on Saturday.

“A database of that size containing the private data like phone numbers of lots of Facebook’s users will surely cause dangerous actors taking advantage of the information to perform social engineering attacks or hacking makes an attempt,” said Gal to the news web site.

Some of the information appeared to be current, while some of the leaked phone numbers belong to owners of Facebook accounts.

The information is available for free on a hacking forum, making it widely accessible to anyone with rudimentary data skills, Business Insider said. The publication verified several records by matching known Facebook users’ phone numbers with the IDs listed, and confirmed other records by testing email addresses from the data set in Facebook’s password reset feature, which can be used to partially reveal a user’s phone number.

I have yet to see Facebook acknowledging this absolute negligence of your data. https://t.co/ysGCPZm5U3 pic.twitter.com/nM0Fu4GDY8

It’s not the first time Facebook has its users’ data leaked online. In 2020, Mark Zuckerberg’s company was concerned in a controversial situation related to privacy problems and confirmed that thousands of developers had been able to access information from inactive users, that is unexpected behaviour.

The company has not addressed this new data leak yet, but it could be the worst leak Facebook’s ever been involved.