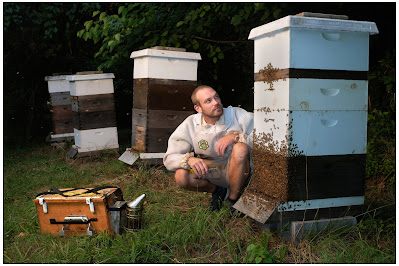 Lighting with flash can give you more than just the ability to control the quality of your light. With the inherent consistency of light from (manual) flash, you can layer in slices of time as well.

But first, you’ll want to lock down two things: the ambient light portion of your exposure, and your camera’s physical position.

This portrait of beekeeper Devon Kosisky, done for the Howard County Conservancy, was shot as part of a series for their 30th anniversary. You can see some of the other photos, a few of which have been featured in Strobist, here: 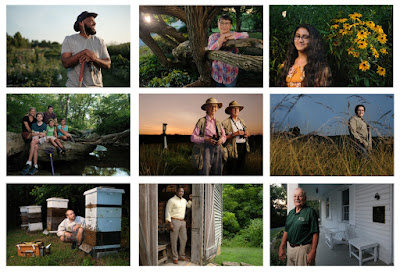 I shot Devon during the late afternoon because that’s when his bees come back to their hives. But it also meant the ambient light would be cooperating with us both in terms of level and direction.

The sunlight was coming from camera right, but the scene was shaded from a group of trees out of frame in that direction. I had pre-scouted the location and decided, for those two reasons, the afternoon would be the best time to shoot. We would light the scene against the direction of the ambient to give us more control.

Using two Paul Buff e640 Einstein flashes, we easily were able to overcome the ambient level in the shaded area and create our new direction and quality of light. The key light was a 47” Buff Octa at almost 90 degrees camera left. That light got a Rosco 09 warming gel. If you are working outdoors, a low angle of key light in nature (ie the sun) would generally be a warmer color due to more atmosphere filtering the light en route to you. 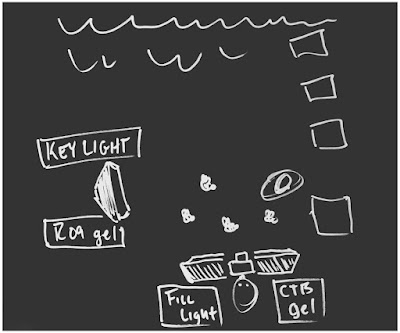 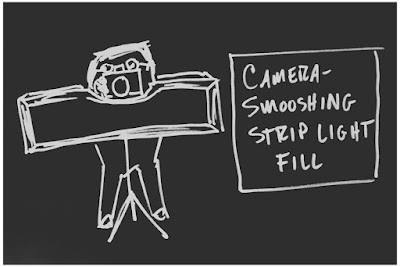 (Related note: for a great on-axis light that’ll look better than any ring light, you can use two horizontal strip boxes, smooshed up one atop the other, and stick your camera in between them.)

Note: the strip box fill light got a 1/2 CTB, to offset the warm key light and create a little chromatic complexity.

As far as the overall exposure, 1/250th at f/5.6 at ISO 200 was sufficient to suppress the ambient light. This was important because I wanted the trees in the background (and further away) to go dark. The dark background would help the returning bees stand out.

The bees, which are closer than Devon to the key light, are obviously very small. So anything I can do with light to help them stand out will help the legibility of the photo.

Once we get our ambient exposure set, we are going to lock those values down for full consistency between frames. And I am also going to physically lock down my camera on a tripod, and even hang my camera bag from the tripod’s center hook to further stabilize it. That’s because I’m planning this image as a layered multiple exposure, and I wanted to keep everything locked down throughout the shoot.

I did this is for several reasons. But first, it’s important to differentiate a photo like the from something you might shoot for an editorial assignment. (Stacking frames like this in a newspaper environment would get you quickly fired.)

With my locked-down camera, light, and exposure, this gives me the ability to choose a good frame for both Devon and for the returning bees. I just line the two photos up in layers, auto align them (because even a locked down tripod can have the camera shift a few pixels) and erase portions of the top frame to reveal that portion of the bottom frame.

This way, not only can I choose the best shot for Devon vs. the bees, but I can also add in more bees if I like. I can even choose a frame where a bee is flying through the exact line of sight from my preferred Devon frame. (Which I did.)

In short, the consistency of the light from my Einsteins gives me great flexibility here.

Also, speaking hypothetically, say you did the whole shoot and then Devon went to get his bee smoker. And that smoker looked really cool —  a wood-and-metal, steampunk-looking box.

Instead of re-shooting the whole thing, you could just have him plunk it down into the graphically empty bottom left portion of the frame, then shoot a quick, still-locked-down shot with the smoker and drop it into your final image.

Again, doing this for the newspaper: NOT cool. But for the HCC’s 30th Anniversary: No worries.

The bees are just out there every day, quietly doing their thing. They fly from flower to flower, drinking nectar as they pollinate (and cross-pollinate) everything in sight. Actually, a good-sized chunk of our food supply ultimately depends on this thankless work. Which is why it was a bit disconcerting when the bee population started dropping off drastically in 1990. Thankfully, the bees have been making a partial comeback since 2008.

Cross-pollinating also works for photographers as well. In this analogy your subject is the bee, you are the pollen and your next photo project is the flower across the field.

Of all of the ways I have found to discover my next project, nothing works better than just having a great conversation with your subject while you are shooting. In this case, Devon was explaining to me all about bees as I was explaining to him what I was planning with the multiple exposures.

Best thing about a shoot, IMO: meeting someone interesting and exchanging info in a way where you both come out the better for it.

In the course of our conversation, I found out that Devon’s day job is arguably way more interesting than beekeeping (which is a pretty high bar.) And developing a project related to his work will most definitely be near the top of my post-pandemic agenda.

I’d tell you more, but I understand that several photographers from our local newspapers are regular readers of Strobist. And I have no desire to be the bee that carries them to that particular flower.

This article was published as an entry in the Strobist Lighting Cookbook. New articles and how-to’s appear monthly. To receive notifications for new posts, you can follow via email or via Instagram.

Sigma Discontinues a Whole Bunch of Its Older DSLR Lenses