Moved beyond measure by President Biden’s inaugural ceremony yesterday, I’ve entered the last lines of Amanda Gorman’s poem The Hill That We Climb into my “commonplace book”.

I’ve kept a so-called commonplace book since 1986, when my sister gave me a sleek blank notebook with thin ivory-light pages and a black leather cover that looked ever so sophisticated. A “commonplace book” is somewhere to copy out pieces of text that you don’t want to lose: perhaps they appeal to you by ringing emotional bells, putting words together like music, or reflecting what you feel, think or hope. Amanda Gorman’s poem uses the 110th page and after 35 years the notebook is still is excellent shape and has enough room in it to last me another 70 if used at the same rate, which will hardly be necessary.

If you’ve never kept a book like this, I recommend it, because you can measure out the progress of your inner self by what you read back, what you’ve chosen, why you chose it and where the holes are. I didn’t enter anything into it between the month of my father’s death in August 1996 and that of my sister’s death in March 2000. The latter was poetry by Irina Ratushinskaya and Arthur Rimbaud. The former was an advert for running shoes on TV that stated simply: “Some people quit when they reach their threshold of pain. Some don’t.”

Back in the 80s, when I was a student, I used to write with an italic pen, trying to preserve these slivers of guiding wisdom in beautiful calligraphy, but it never quite looked as good as I wanted it to (and crossings-out suggest I’d never heard of Tippex then), so in due course I gave up and used a biro, while still attempting neatness. That went out of the window too, so there are a few entries that I can hardly read at all. Now I’m trying again to make things legible so that some day, if we survive this year and manage to grow older and need stronger reading glasses, I’ll be able to look back on the latest passages and say “Hm, OK, so that’s how we got through that little nightmare…” 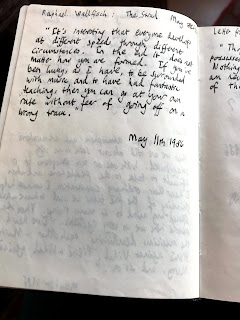 In May 1986, I see, I copied out a passage of an interview in The Strad with Raphael Wallfisch, having no clue that I would someday meet and interview him myself. It is about the pace of artistic growth. “It’s interesting that everyone develops at different speeds through different circumstances. In the end it does not matter how you are formed. If you’ve been lucky, as I have, to be surrounded with music and to have had fantastic teaching, then you can go at your own rate without fear of going off on a wrong track.”

This was from a time when I was profoundly unhappy at university, furious about the institutional arrogance, small-mindedness and snobbery I was encountering there, especially when I’d just spent the Easter holidays in New York sitting metaphorically at the feet of some really incredible musicians. That was the year I had a consultation lesson with Richard Goode, went to a lecture by Carl Schachter about Schenkerian analysis at the Mannes College, and met Oscar Shumsky, who put on an LP of Rachmaninov playing his own music, which blew my mind as I had never heard him before. Historical recordings were in their infancy of CD transfer back then, these gems were rare and precious and the idea that one day the whole lot would be available on computer at the touch of a button would never have been even a glimmer in the eye, let alone the ear. With a quick splash of memory, I can see how comforting Raphael’s words would have seemed at that moment.

All this can be brought back at the sight of those words, inscribed in slightly smudged black ink.

Over the years the focus of the entries change – from musings on love and friendship from Emily Brontë and Joni Mitchell, to seeking ways forward in writing (Angela Carter, Hermann Hesse, DH Lawrence) and some awfully naive and now slightly embarrassing spiritual texts that were nevertheless helpful around the time my mother died in 1994. There’s material from poets and authors from France, Germany, Austria, Bosnia, Russia, America, Ireland, Hungary. Bits of wisdom from Lutosławski and Cage. There’s some Ovid, some Keats, some Byron, Betjemen, Dylan Thomas. There’s a wonderfully useful poem about how to stop worrying – Mary Oliver’s “I worried” – copied out in January 2019, and thank God almighty I didn’t know that what I was worrying about just then (Brexit and the likely collapse of our musical world) was in fact entirely justified.

In the past year I’ve only made three entries, but that’s quite a lot, since there was nothing at all in 2014 and only one apiece in 15 and 16. Since the pandemic struck, I’ve lighted upon a little phrase of Yeats, a fierce piece by Robert Frost called “Fire and Ice”, and an extract from an interview with Hilary Mantel about what historical fiction can do that academic writing on history does not.

And now from the past to the future: Amanda Gorman, the US’s youth poet laureate, 22 and blazing a trail into the future. I hope her words at the inauguration will stand as inspiration and sustenance to us for many years, should we be fortunate enough to be granted them. Now I will have them in my notebook, accessible at the slide of a drawer, for as long as I live.

Sweetwater: All Musicians Should Visit This Fort Wayne Music Superstore