Qualcomm officially announced its Snapdragon 888 5G Mobile Platform yesterday, which will be featured in a wide array of next year’s flagship Android devices. Unfortunately, Qualcomm didn’t provide many details on its new SoC at the time, other than to say that it would feature the next-generation Snapdragon X60 5G modem-RF system.

Today, however, Qualcomm is ready to spill the beans on the underlying architecture of the Snapdragon 888 5G Mobile Platform and how it will advance next-generation devices. There’s a lot to unpack here, so let’s kick things off with the Kryo 680 CPU and Adreno 660 GPU.

Boosting Performance With Kryo 680 and Adreno 660

At the heart of Snapdragon 880 is the Kryo 680 CPU, which Qualcomm claims provides up to a 25 percent boost versus the Kryo 585 CPU found in the current Snapdragon 865. More importantly, Kryo 680 is based on Arm’s powerful Cortex-X1 architecture that is able to hit clock speeds of up to 2.84GHz, which we first talked about earlier this year. Likewise, the CPU can support up to 16GB of LPDDR4x-2133 memory or LPDDR5-3200 memory when it becomes more prevalent. 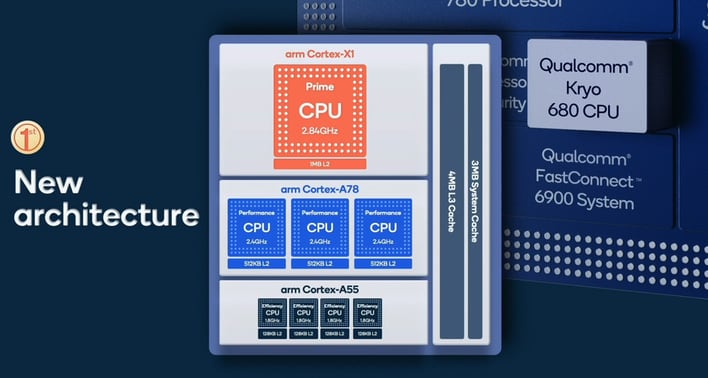 The Adreno 660 GPU is no such either, and promises a 35 percent uplift in performance over the Adreno 650 GPU in the Snapdragon 865. The Snapdragon 888 is manufactured on a bleeding-edge, more advanced 5nm process node (putting it on an even keel with Apple’s A14 Bionic and Apple M1 SoCs), and as such, Qualcomm says that the Kryo 680 and Adreno 660 are now able to maintain higher levels of performance for longer periods of time before throttling. The enhanced sustained performance should be good news especially for mobile gamers that want the best performance out of their devices to maintain high frame rates, and offer a smooth, consistent experience. 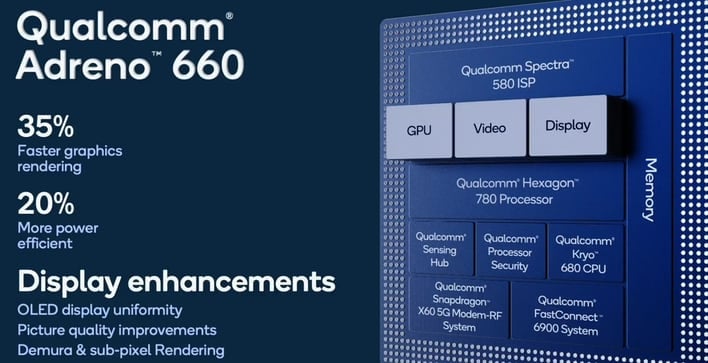 In keeping with the gaming theme, the Snapdragon 888 is also fully compliant with the Snapdragon Elite Gaming platform. But the Snapdragon 888 now has some new tricks up its sleeve with the addition of Variable Rate Shading (VRS), which is a first for smartphones. Its inclusion here can provide up to a 30 percent uplift in rendering performance with games and applications that leverage the technology.

The use of the a more advanced 5nm manufacturing process, in conjunction with architectural enhancements, Qualcomm is also claiming significantly efficiency and performance per watt uplifts for the Snapdragon 888. Even with its increased performance, battery life should be strong on the platform.

The Snapdragon 888 5G Mobile platform includes one major improvement over its predecessor with regards to connectivity, and it relates to the 5G modem. With the Snapdragon 865, the Snapdragon X55 5G modem was a separate chip which took up additional space on smartphone motherboards while delivering a small hit in power efficiency. Following the single-chip 5G solutions that have been released during 2020, including the Snapdragon 765 and Snapdragon 690, the Snapdragon 888 includes an integrated, class-leading 5G modem as well. 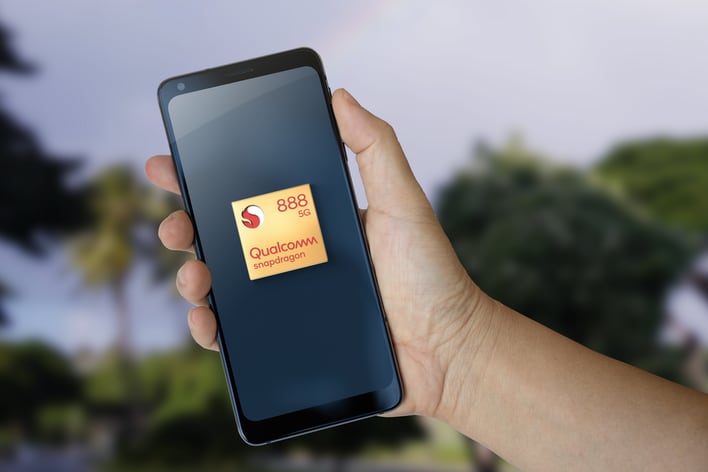 In this case, we’re looking at the 3rd generation Snapdragon X60 5G Modem-RF system, which supports mmWave and sub-6GHz bands. Downlink speeds have been boosted to a maximum of 7.5GHz, while uplink speeds top out at 3Gbps. The Snapdragon X60 also supports all the latest wireless technologies including 5G carrier aggregation, global multi-SIM, and dynamic spectrum sharing. That means that next-year flagship smartphones – as long as they include the requisite mmWave antenna hardware – will be capable of connecting to any 5G network around the globe.

There’s also support for Wi-Fi 6 and the emerging Wi-Fi 6E, which should become more common in 2021 and beyond. Wi-Fi 6E operates on the new unlicensed 6GHz band and provides greater throughput (peak speeds are pegged at 3.6Gbps). Rounding things out is an integrated Bluetooth 5.2 wireless radio.

Snapdragon 888 AI And Camera Ops Get A Boost As Well

Although the CPU and GPU are the headlining components of any new Snapdragon Mobile Platform, we can’t forget about the AI and ISP (Image Signal Processor) engines. The Snapdragon 888 5G Mobile Platform introduces the new 6th generation Hexagon 780 processor, which Qualcomm claims offers a 3x uplift in performance-per-watt over the AI engine found in the Snapdragon 865.

Hexagon 780 can deliver 26 TOPS compute performance and works in connection with a 2nd generation Qualcomm Sensing Hub, which handles low-power operations in a more efficient manner that previous-gen chips (i.e. screen activation, activity detection, etc.). Qualcomm is even employing Hexagon 780 to enable what it calls AI Enhanced Call Noise Suppression, which you can see in action in the video above.

As for the camera subsystem, the Snapdragon 888 brings with it the Spectra 580 ISP. This new ISP is capable of capturing data from up to three cameras simultaneously, at up to 2.7 gigapixels per second. Remarkably, this is enough horsepower to enable users to capture three concurrent 4K HDR videos, or three 28MP images all at once. Photo capture has also been enhanced with 10-bit color depths with support for HEIF image formats. 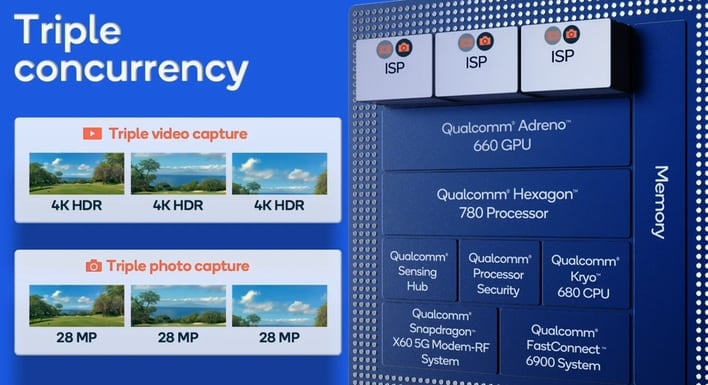 As is typically the case with new flagship Snapdragon SoC releases, the first smartphones to use the Snapdragon 888 5G Mobile Platform will arrive in Q1 2021. We’d imagine that Samsung’s rumored Galaxy S21 Series and the OnePlus 9 Series will be among the first to adopt this powerful new mobile computing platform and we look forward to seeing what it can do first hand.