You may not be familiar with Realme, but I think there’s a very good chance you will be soon. Not only is the company pumping out new handsets at an incredible rate (by my count, this is the 21st in the 29 months the firm has existed, and I have the 22nd on my desk awaiting a review too), but they also seem to be of a very high standard without breaking the bank.

That shouldn’t be surprising: although Realme is new, it’s an offshoot of Chinese giants Oppo – a company that knows a thing or two about creating quality handsets at tempting prices.

With the Realme 7, the company has turned in a handset with flagship good looks and a few tricks you might expect from far more expensive handsets along the way. The Realme 7 is a handset that deserves to be on your radar if you’re on a budget.

Realme 7 review: What you need to know

The Realme 7 is a budget phone with big features. The choice of an octa-core 2.05GHz MediaTek Helio G90T rather than the Qualcomm equivalent may raise some eyebrows, but as you’ll see later, it punches above its weight. Plus, there’s a 90Hz screen and no fewer than four cameras: a 48-megapixel main snapper, an ultra-wide lens, and cameras for macro and monochrome photography.


It comes in two flavours: 6GB RAM with 64GB onboard storage, or 8GB of RAM and 128GB storage. Our review unit is the latter, so bear that in mind when it comes to benchmarks later.

That price was once pretty uncompetitive, but that’s no longer the case. You’re spoilt for choice in the sub-£200 price bracket with the Realme 7 coming up against the likes of the £150 Moto G8 Power Lite, the £180 Motorola Moto G8, the £200 Xiaomi Redmi Note 9 and its predecessor, the excellent Redmi Note 8T.

The newest kid on the block is the superb Xiaomi Poco X3 NFC, which comes in at just £199, and it’s pretty stunning value for the price.

For two phones with virtually the same name and design, you might be surprised as to just how different the Realme 7 and £279 Realme 7 Pro are from each other. And confusingly, the £100 cheaper version has a couple of advantages over its pro sibling: a 500mAh larger battery and a screen with a 90Hz refresh rate.


In every other way, though, the Realme 7 Pro is the better handset, as you would expect. It has a faster Qualcomm Snapdragon 720G processor, 2GB more RAM and twice the storage (of the base model). The screen, while not 90Hz, is Super AMOLED rather than LCD and it has a fingerprint reader under the glass, too.

The quad-camera array is broadly the same across the two phones, with both sharing an 8-megapixel ultra-wide lens, and 2-megapixel macro and depth sensors, but the main snapper is different. For the Realme 7, it’s a 48-megapixel Samsung S5KGM1ST; for the Pro, Sony provides a 64-megapixel Sony IMX682 sensor.

So there’s definitely reason to stretch to the Pro if you can manage it – and it puts the £199 8GB model in a tricky place, when an extra £80 would see a whole bunch of additional improvements alongside the RAM boost.

The Realme 7 is a reminder of just how far budget phones have come in the last few years. This is a handset which isn’t a million miles away from 2017’s top-of-the-range iPhone X in terms of looks, with a large 6.5in display covering the front of the screen. The bezels are there – a couple of millimetres thick all the way round, and slightly more pronounced on the chin – but it’s good looking, and there’s no notch in sight, with a pin-hole camera located on the top-left-hand corner of the screen.

Flip it over and you get your first big clue that this phone is aimed at budget consumers: the back is quite obviously plastic to the touch. That said, it does a good impression of premium, with a neat two-tone design, split by a vertical divide along the camera bump. Said bump, by the way, houses four lenses in a traffic light formation, and sits a millimetre out from the back, meaning the Realme 7 does have a tendency to wobble when placed on its back.


But it’s a good look, and the Realme 7 gets plenty of quality-of-life extras, too. First of all, the headphone jack is still there, on the bottom of the handset next to the USB-C port. There’s a fingerprint reader embedded into the power button on the right-hand side, which is still my personal favourite position for it, and, to top it all off, the handset supports two SIMs and microSD card expansion, rather than making you pick and choose between the two.

As displays go, it’s decent if unspectacular – which would be fine if budget handsets weren’t getting better and better at providing a lot for the low cost of entry. Our tests revealed an sRGB gamut coverage of 93% and a gamut volume of 107% – far from the worst we’ve seen, but not up there with the screens on Xiaomi’s budget Redmi Notes or the sensational Poco X3 NFC. Contrast is good at 1294:1, though, while brightness is equally dependable, reaching a high of 438cd/m2 in our tests.


Not a bad screen, then, but neither is it outstanding. But what about the trump card? Yes, the Realme 7 has a 90Hz refresh rate, meaning your phone can output at 90fps, making everything feel that bit smoother.

Well, theoretically, anyway: the truth is that there aren’t many apps that support frame rates of over 60fps, and even if there were, a £179 phone probably isn’t the place to see them at their best. So while it’s a mild plus point, it’s probably not worth basing your next phone contract on in this price range.

And what of the performance? Can a MediaTek processor finally impress us? In the past, the company’s chips have played a distinct second fiddle to Qualcomm and Kirin processors in the world of Android hardware, but things have been looking up with recent releases.

To recap, the Realme 7 is powered by an octa-core 2.05GHz MediaTek G95 chip, which in our case is backed by 8GB of RAM. Here’s how it fared in Geekbench 5:

Not bad at all, then. The Realme 7 is a far stronger performer than the Qualcomm Snapdragon 665 that powers both the Moto G8 and Redmi Note 8T, and it’s not far off the Snapdragon 720G in Realme 7 Pro. There’s certainly not £100 of performance difference in the gap between the regular and Pro, anyway. Unfortunately, you get similar performance in the Xiaomi Poco X3 NFC, which only costs £20 more.

Yes, it’s about 20% slower than the Snapdragon 720G, but again there’s not enough difference between the Realme 7 and 7 Pro to justify an extra £100. Once again, the Poco X3 NFC is a little faster, but there’s less in it this time, and unfortunately our Redmi Note 9 refused to run GFXBench, so you’ll just have to imagine its relative performance.

The 5,000mAh battery also puts in a solid performance, going an impressive 18hrs 26mins before going flat in our looped video test. That’s pretty good going, especially considering the Moto G8 Power Lite – a handset named for its stamina – only managed 90-odd minutes more. The only slight disappointment here is that the Realme 7 Pro only lasts 15 minutes less, despite losing 500mAh of battery capacity – that’s the benefit of an OLED screen and more power-efficient chip for you.

The charts above make it clear what the real rival to the Realme 7 is: the Xiaomi Poco X3 NFC, which is just £20 more expensive. So how do the two compare in terms of photography?

Well, to back up a little bit, here’s what you’re getting with the Realme 7’s four rear-facing cameras. The main snapper is a 48-megapixel f/1.8 number, and it’s backed up by an 8-megapixel, f/2.3 ultrawide lens. There are also two 2-megapixel, f/2.4 lenses: one for depth sensing, and another for macro photography. 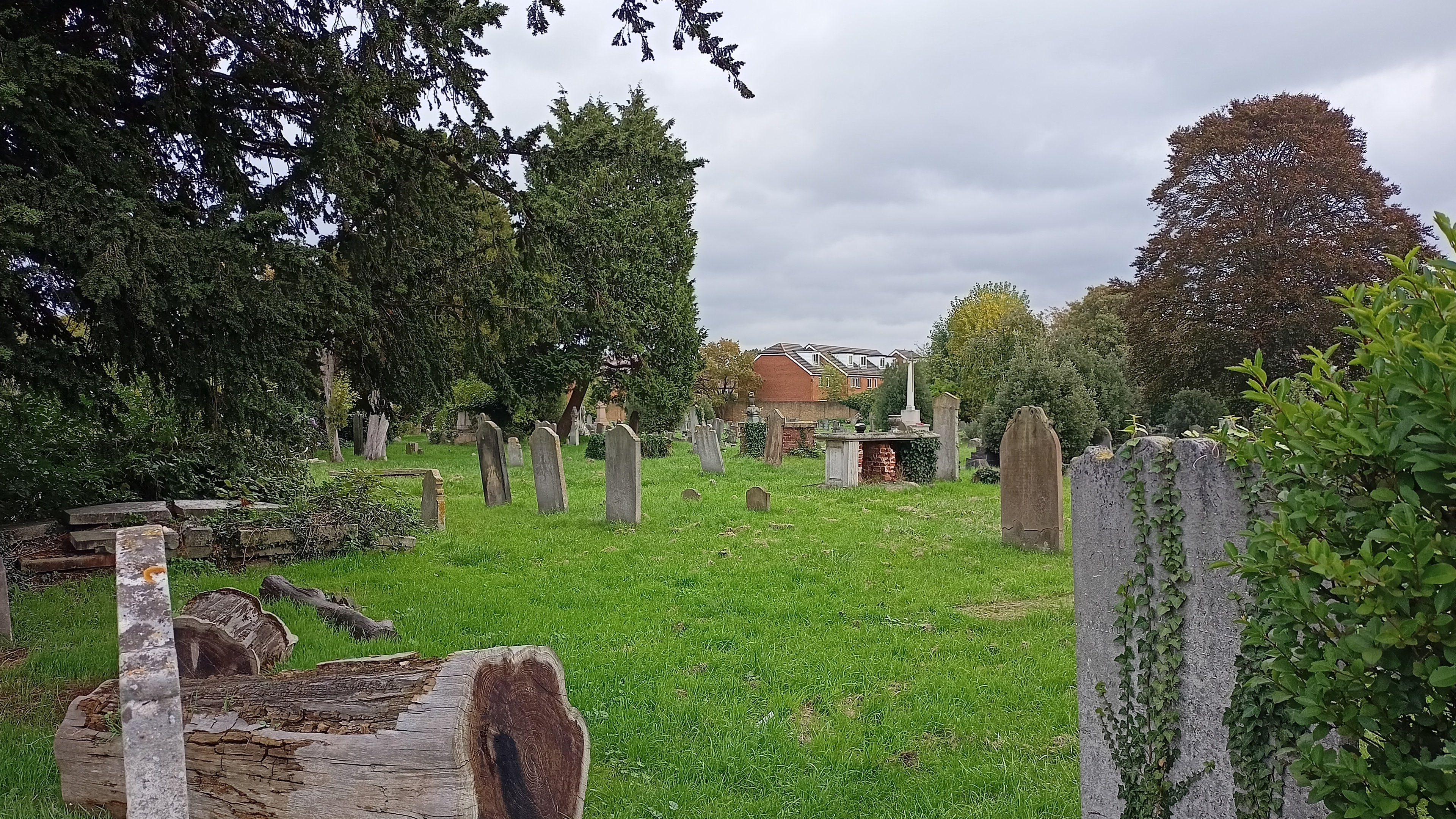 So how does it do? In decent lighting conditions, the answer is “pretty well” for a sub-£200 smartphone. Yes, the colours have a tendency to be a bit oversaturated, as with the slightly lurid grass in the picture above, but otherwise it’s not too bad. 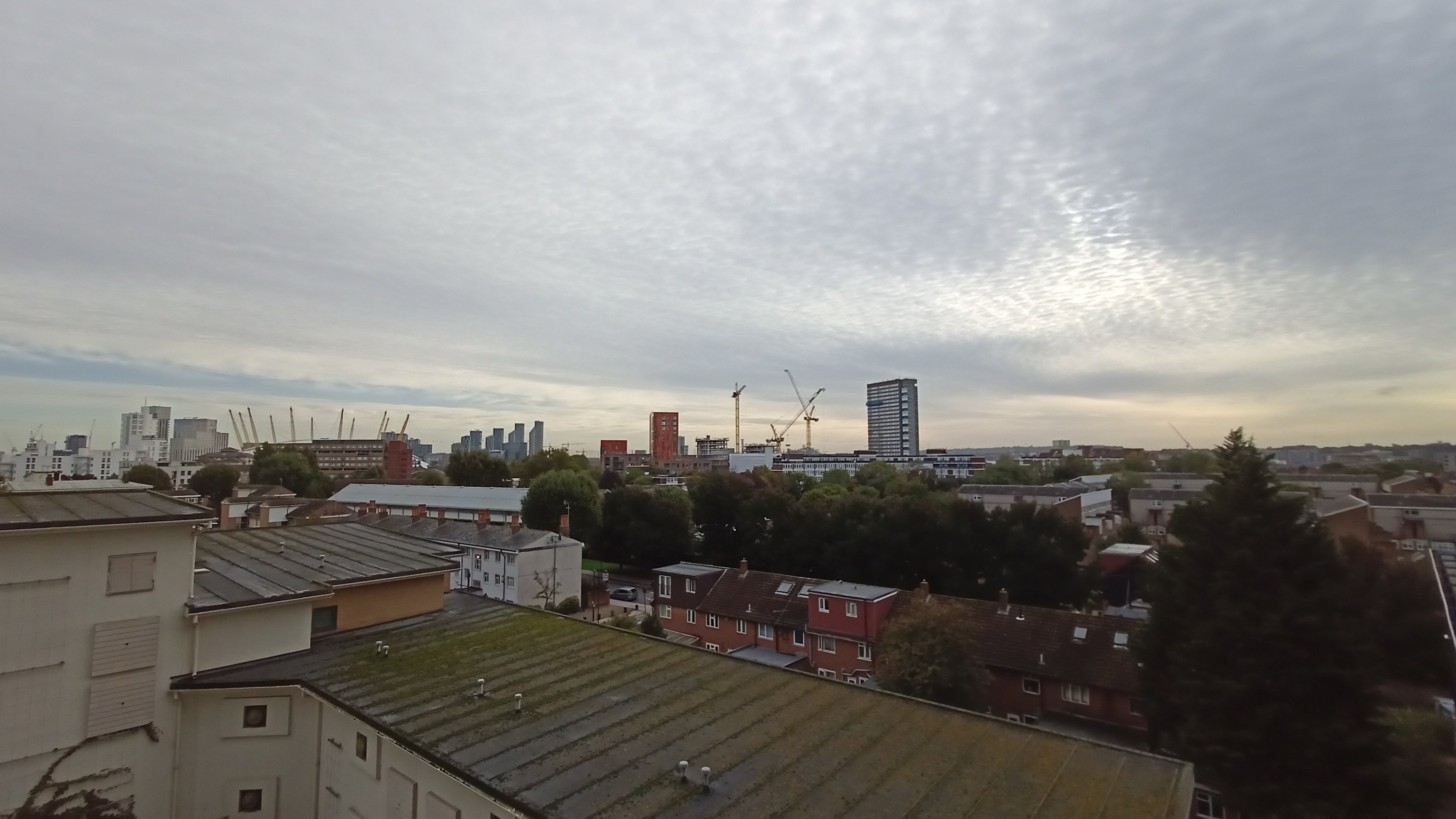 Zoom in on the picture above, however, and it’s clear that the Poco X3 NFC comes out on top in the same conditions.

Both, unfortunately, struggle in low-light conditions, despite the inclusion of night mode. 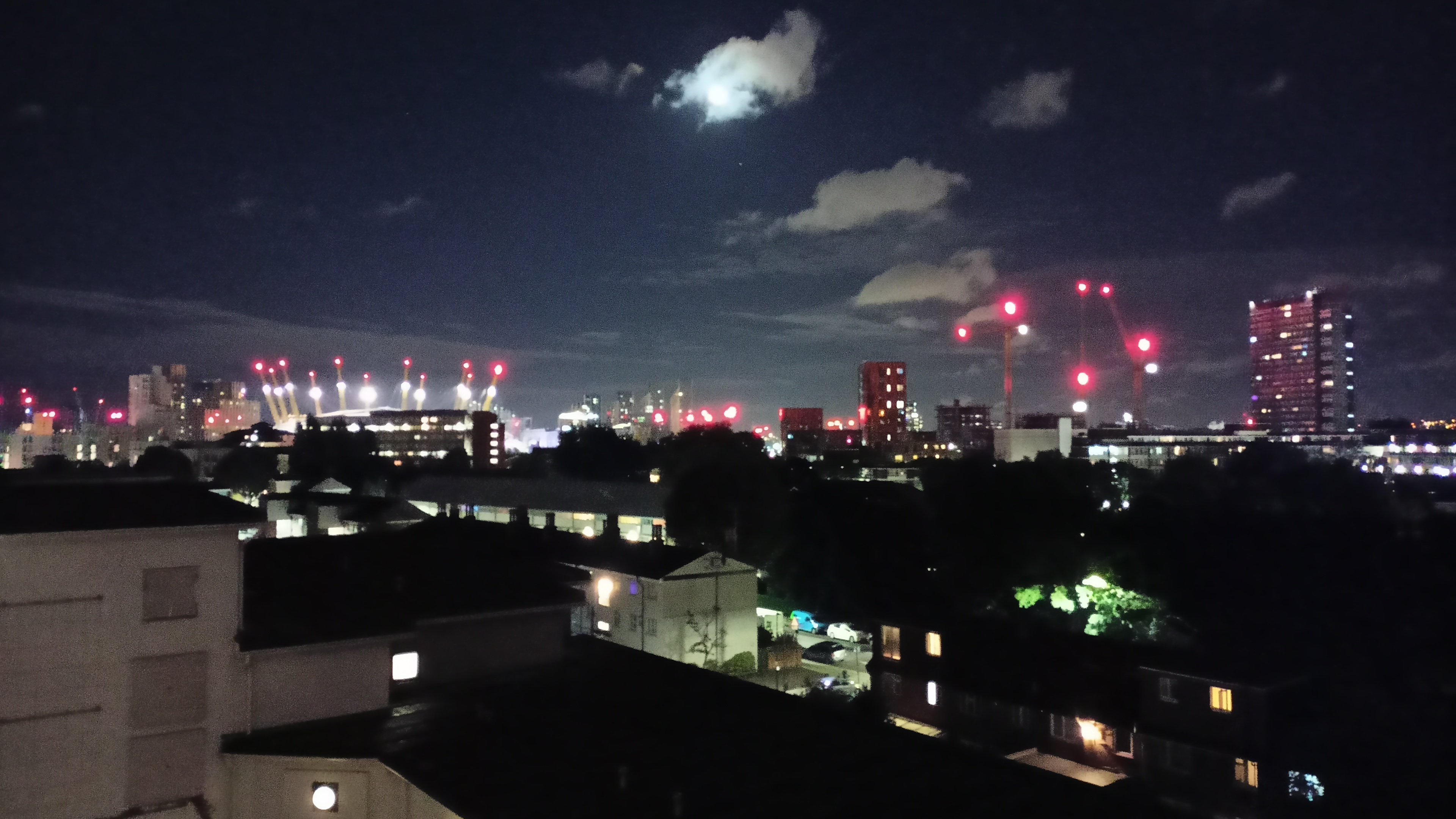 Here’s the same image above on both phones, where neither exactly covers themselves in glory.

The other lenses are a nice extra, but not exactly what you’d call essential – and I can’t be alone in just wishing that budget handset makers would just do one lens really well, rather than joining the multi-lens arm race. That said, the macro lens is enjoyable and picks out a decent amount of detail as you’ll see from the next picture – although it’s worrying that the AI photography agent kept insisting this £1 coin was “food.” The front-facing camera is 16-megapixels with a f/2.1 aperture. It’s fine, as far as selfie cameras go, but as is often the case for cheaper smartphones, the beautification features are a touch overbearing – especially if you go beyond the sensible middle ground of the preset. The picture on the right is me on holiday to the Uncanny Valley. 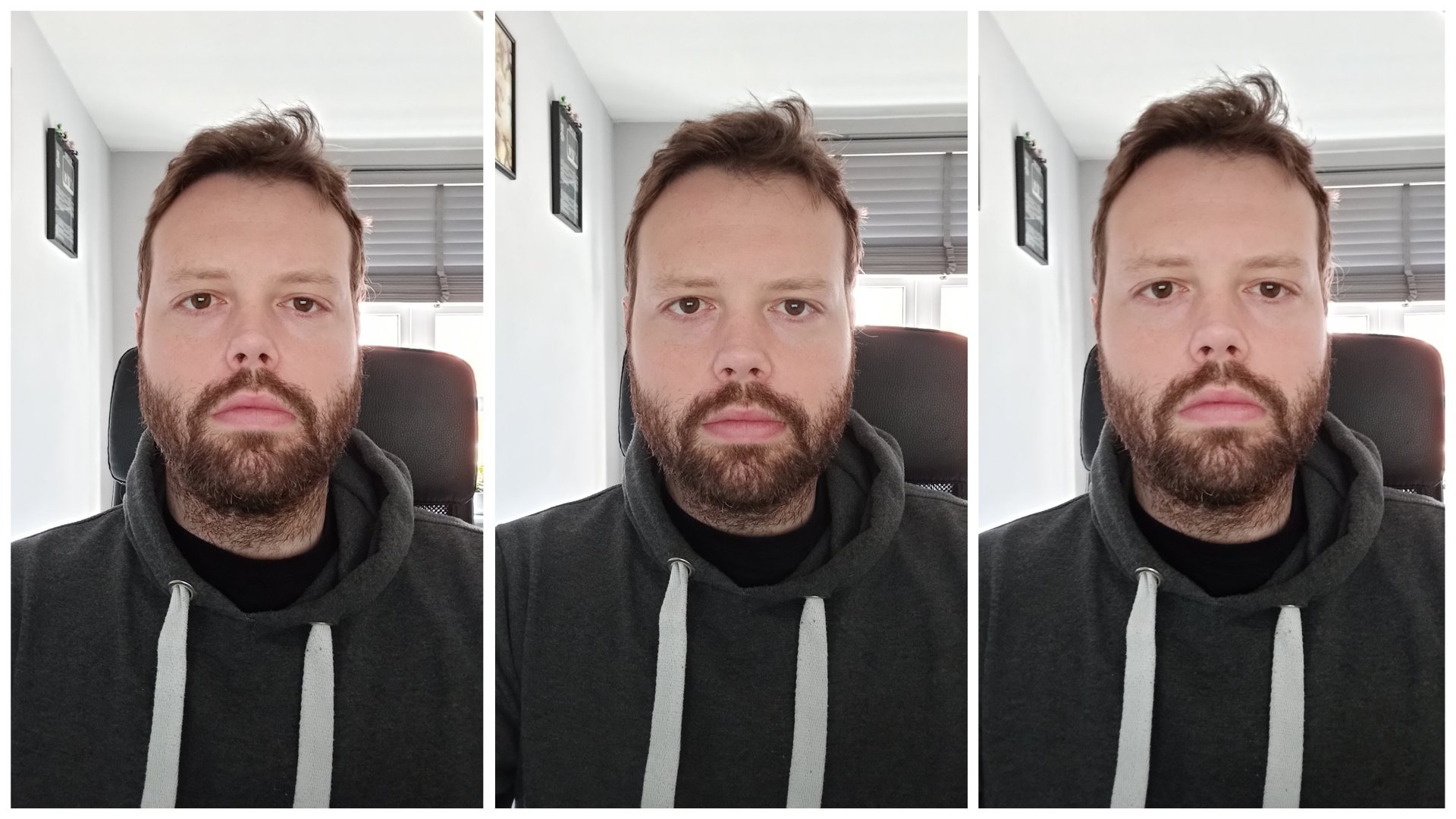 In terms of video, the Realme 7 will shoot 720p or 1080p footage in 30- or 60fps, and 4K at 30fps. There are no options for stablisation, but judging from my test videos, this is something that is disabled when you enable 60fps recording, making it too bumpy to be usable. Otherwise, the quality is reasonable, although sudden changes of lighting (approaching a window, say) tend to overwhelm the camera for a moment, before the lighting levels return to normal.

The Realme 7 is sensational value for the money. It looks great, it performs as well as phones that cost 50% more, and the battery will go the distance. Features like a 90Hz screen are just icing on an already delicious and cost-effective cake.

There is a ‘but’ though. And that ‘but’ comes in the form of the Xiaomi Poco X3 NFC. For just £20 more – or the same money as the 8GB/128GB version of the Realme 7 we were sent – you get a phone that’s better in every way. Narrowly better in the case of the cameras and performance, but the screen is significantly better, and manages an even higher 120Hz refresh rate in the process.

Realistically, you’ll be happy with either. But if you want to make every pound count, it’s Poco all the way.