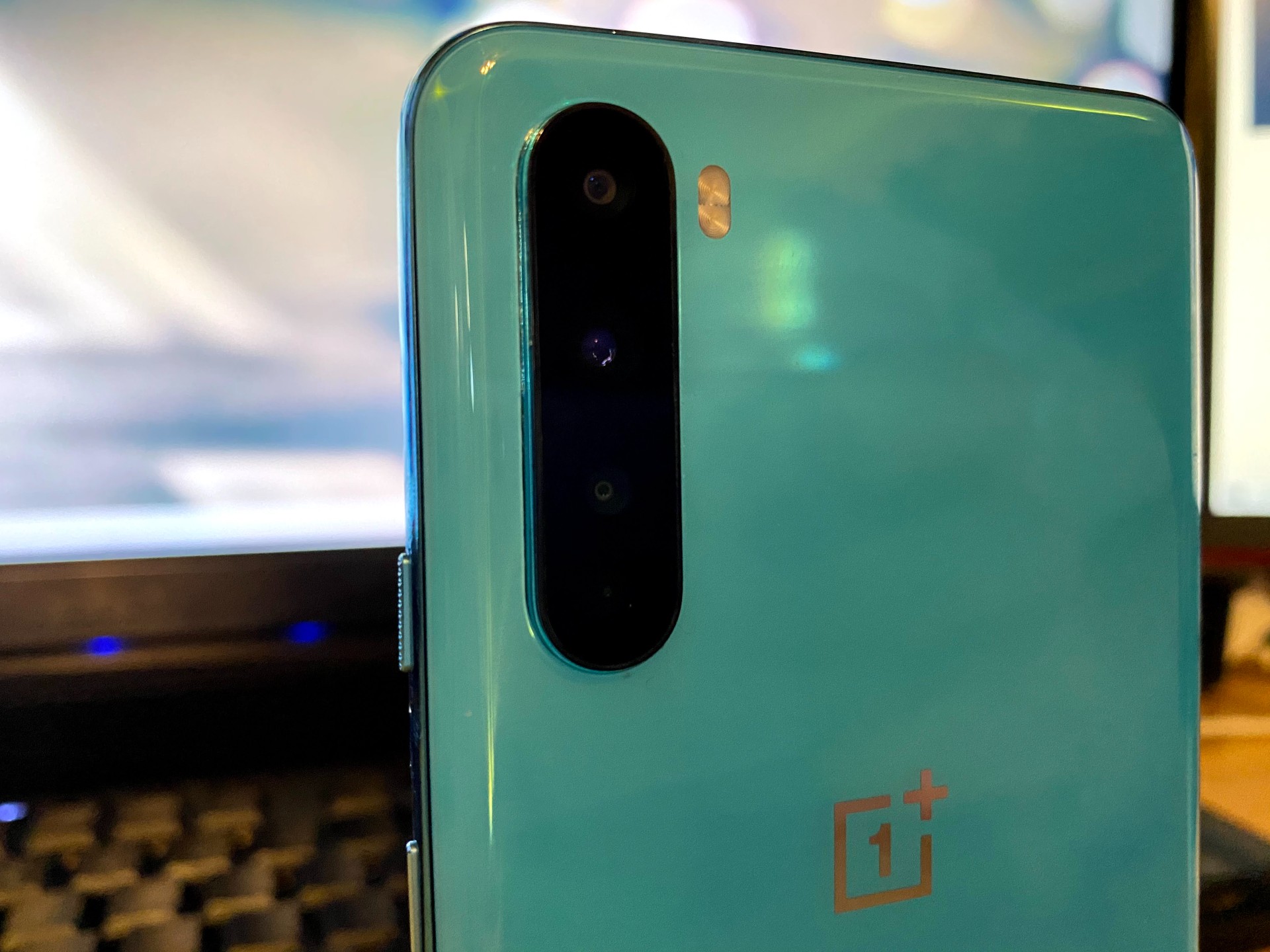 OnePlus built a reputation on its stellar, wallet-friendly phones. From the introduction of the OnePlus One all those years ago, the company has been on a steady march. Every year its phones get a little better… and a little more expensive. We’ve yet to see the company pause its pricing increases and its devices now routinely cost in the same neighborhood as flagships from Apple, Samsung, and Google.

Luckily, the OnePlus Nord is here to save us from those nasty $1,000 prices with a smart design, great battery life, and the best software on any Android device. And the best part? The Nord is only $499, a solid $250 lower than its newest flagship, the 8T, which costs $749. 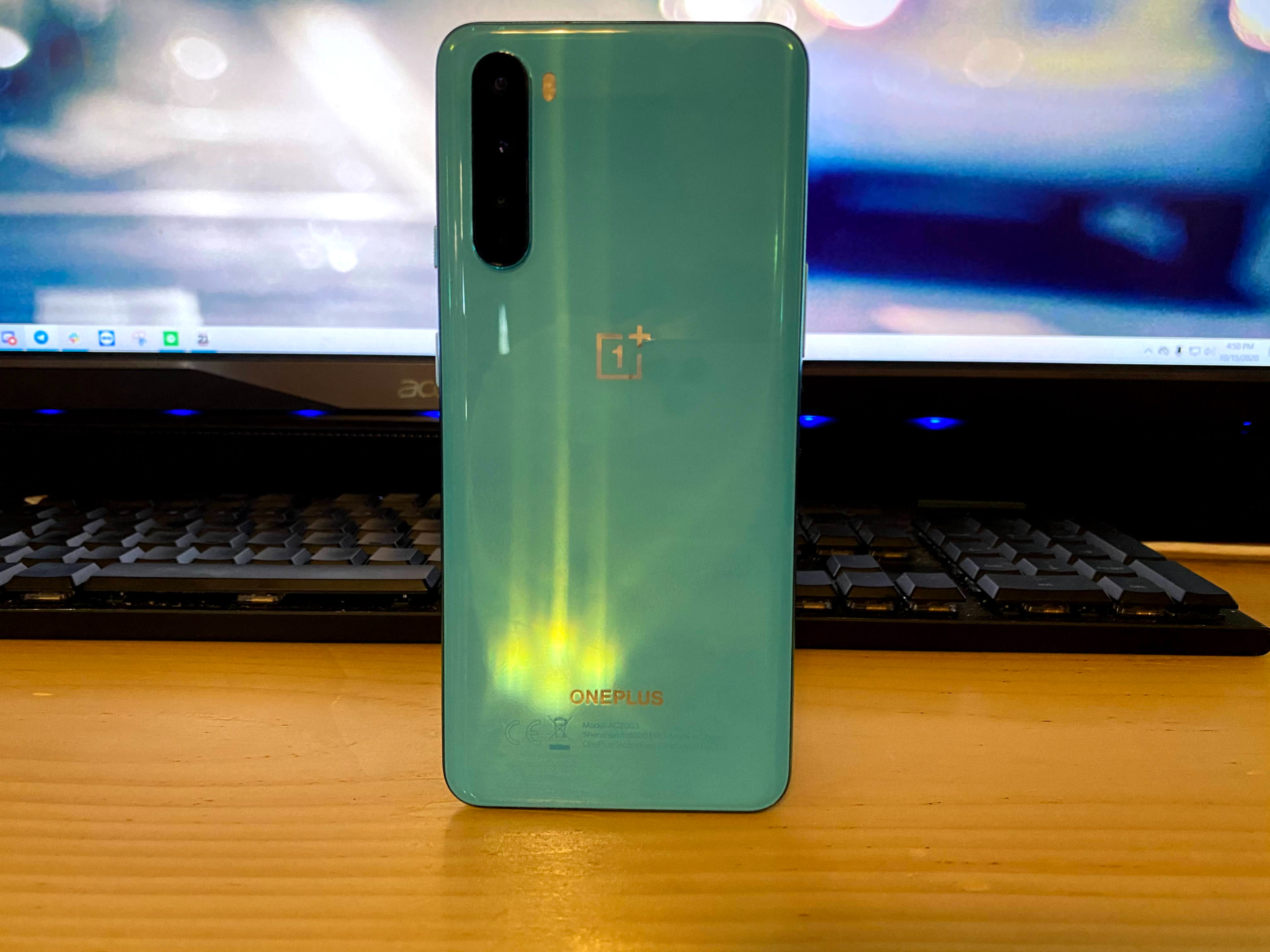 I’ve always been a bit struck by OnePlus’ designs and this time is no different. The OnePlus Nord is one of the better-looking phones available today with an excellent colorway and smooth glass back that looks absolutely fantastic when the sun hits it right.

The rear of the device is home to a large camera sensor in the top left corner, something that’s becoming an all too familiar trend in 2020.

The bottom of the device houses the disappointingly Mono speaker, USB C port, and SIM card tray. OnePlus decided not to follow Google’s lead and continues to eschew the 3.5mm headphone jack. It’s disappointing, but not surprising, as OnePlus is pushing its OnePlus Buds Z, fully wireless earbuds priced at just $50.

The display is nothing short of brilliant. Max brightness is fantastic and makes it easy to see on those sunny days and colors pop to make your images come alive.

I’m very happy to report that this 6.4-inch display is flat, with no curvature at all. In my old age, I’ve really become a hater of curved displays due to how much harder they make devices to use with almost no benefit other than “it looks cool”. 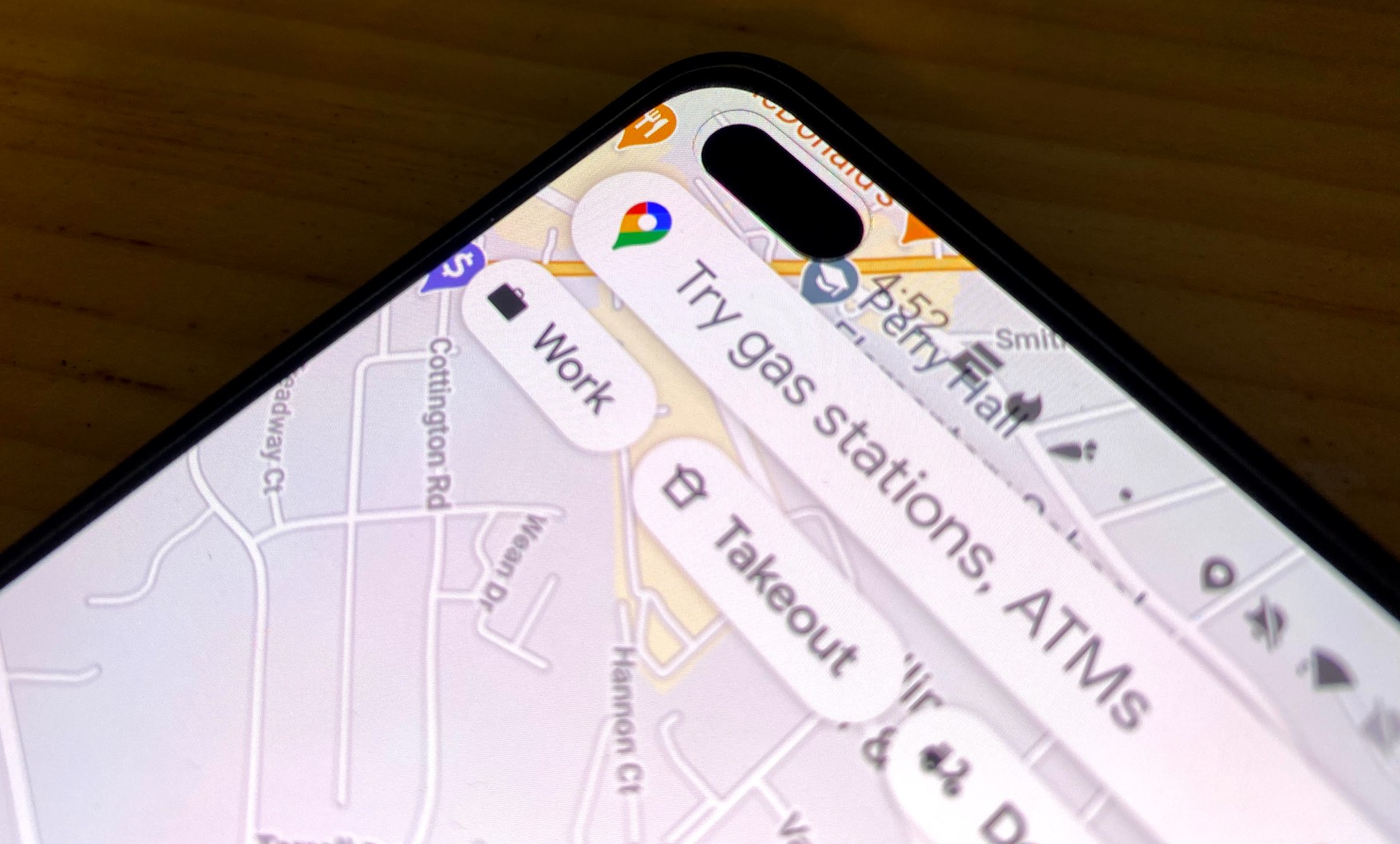 If I did have one complaint about the display, it’s the front-facing camera. It’s actually two cameras, one wide and one ultra-wide angle lens, in the top left corner of the device. I’m not a fan of hole punch cameras but if they’re inoffensive like on the Samsung Galaxy Note 20 Ultra, I can get over it.

The OnePlus Nord, on the other hand, has a pretty ugly cutout and it takes up so much space that you can only get four notification icons at a time in the notification tray. This led to me opening up the notification tray a lot more than I normally would just to see what was up there. It doesn’t look good and it’s annoying. Bring back the pop-up camera, OnePlus! 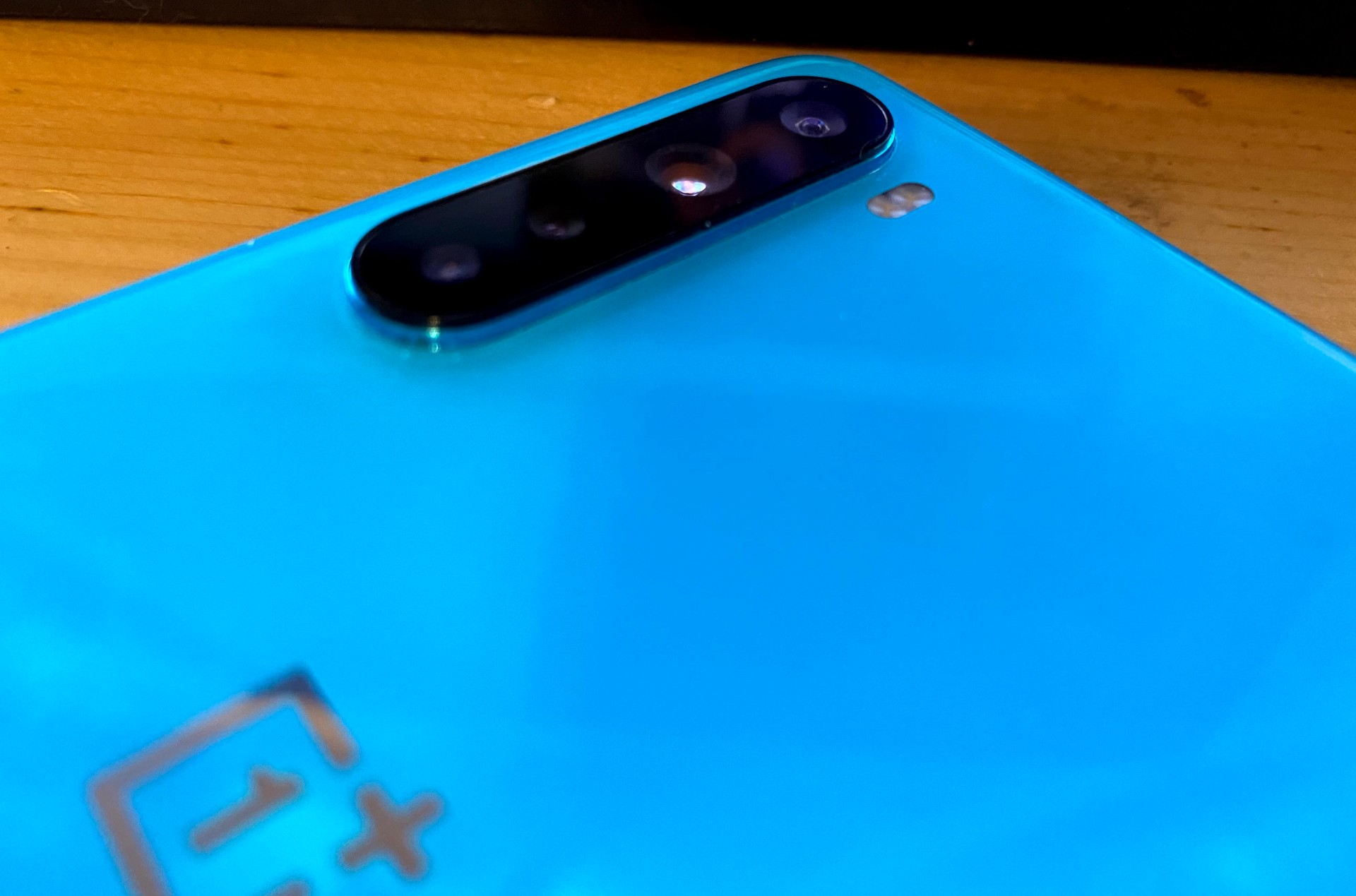 Speaking of cameras, this is easily where the OnePlus Nord is the weakest. There are a total of six cameras – four on the rear and two on the front. The front cameras consist of a 32MP f/2.5 wide-angle lens and an 8 MP f/2.5 ultra-wide-angle lens.

I love the addition of the ultra-wide-angle lens here and I think it makes for some great shots with your friends or family. Selfies with the main lens were fine for social media or sending off to friends.

The problem with the camera setup really is with the rear lenses. We have a quad camera configuration with a 48-MP sensor (the same as on the OnePlus 8), an 8-MP ultra-wide, 5-MP depth sensor, and 2-MP macro.

Let’s get the last two out of the way first. The macro lens is garbage and you should avoid using it. This is the definition of a stat-sheet stuffer and is here for no other reason than for OnePlus to say “we have a quad camera phone”. The depth sensor seems to be equally useless as covering up the lens has no noticeable effect on pictures. 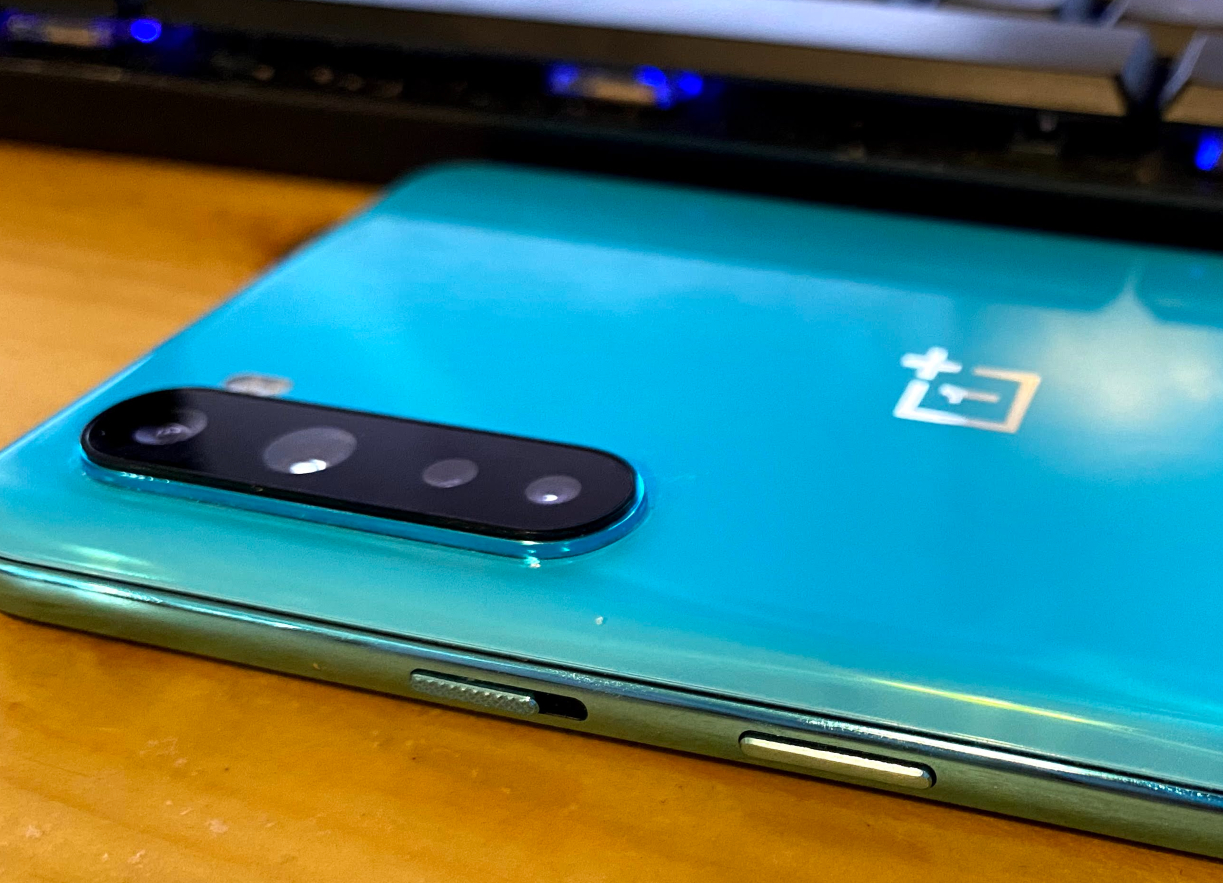 The wide-angle lens is a lot of fun to use. Sure, pictures come out soft but you get that with pretty much any wide-angle lens these days. Take pictures of cool buildings and throw them up on Instagram like everyone and you’ll be just fine. If you’re looking to use this for serious photography work and you’ll probably end up rather disappointed.

And speaking of being disappointed, use the main 48-MP sensor in anything but perfect lighting and you’re going to have a bad time. During the day, the camera takes nice pictures with good color reproduction and a solid focus. But, in anything less than that, pictures become very muddled with soft edges everywhere, detail lost in shadows, and a ton of noise.

There were always going to be corners cut to get the device this cheap and this was it. There are other options on the market that will get you better pictures for a similar price and if that’s important to you, look elsewhere. But, if you’re like me who uses their camera a couple of times a month to snap a picture of the kid to send to the grandparents, it will perform admirably. 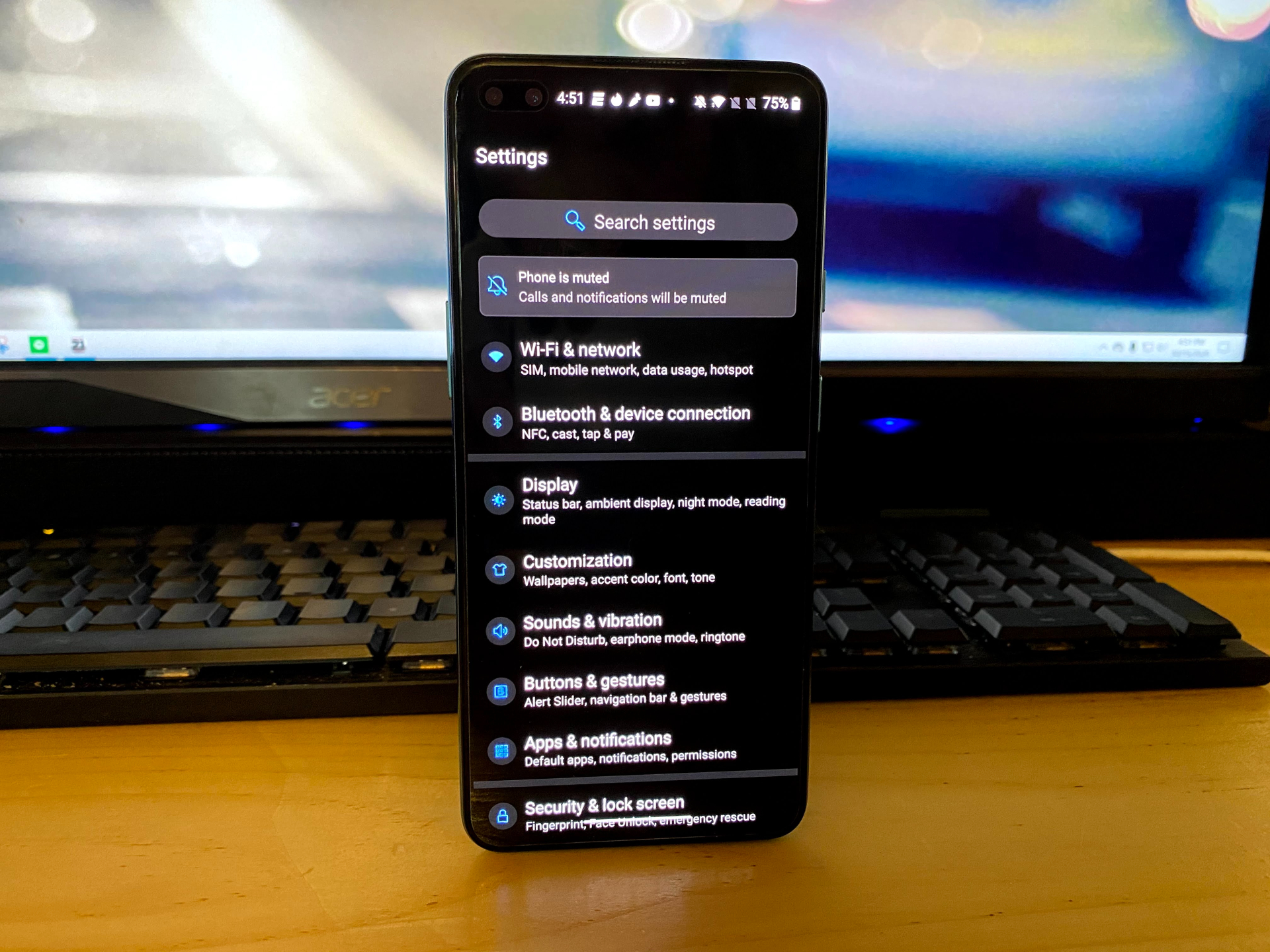 Out of the box, the OnePlus Nord runs Android 10 with Oxygen OS on top. Oxygen OS remains one of the closest to stock Android skins out there and, in my opinion, it’s the best version of Android available right now.

There are no heavy brushes taken to the OS here. Everything looks pretty much the way you’d expect and settings and apps are laid out in logical order. I love the small additions like the Shelf and theme customization engine built directly into the OS. There’s just enough here to satisfy

Possibly the best thing about Oxygen OS is what it doesn’t come with: bloatware. We recently reviewed the LG Velvet via AT&T and I made a joke about it having 37 million pieces of bloatware on there.

There were a handful of apps on the Nord that I didn’t install but they were all able to be deleted in a few seconds. This is exactly how it should be and OnePlus should be applauded for being consumer-friendly here.

I’m sure the company is passing up a lot of money by not signing agreements that would see them pre-install apps that you could only disable, but not delete. 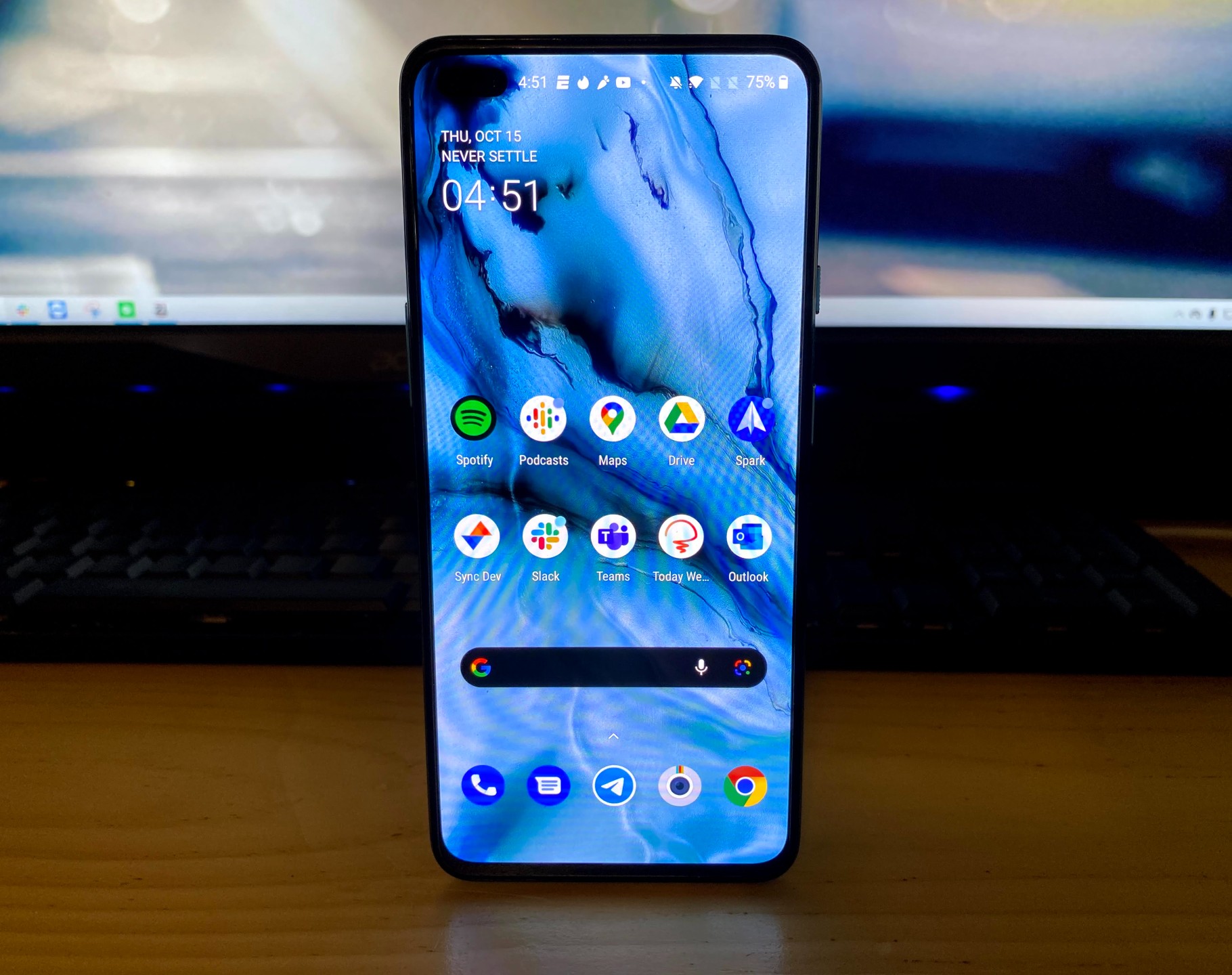 OnePlus has a fantastic track record of updating its devices quickly and for long periods of time. We don’t know yet how they’ll support the Nord as it’s a mid-range phone, but I’d imagine that it’ll get close to the same treatment as OnePlus flagship phones. I’d expect to see years of updates, both major Android upgrades and monthly security updates.

For the first time in its history, OnePlus isn’t using the most powerful processor available for one of its devices. Instead of the Snapdragon 865 or 865+, the Nord features a Qualcomm Snapdragon 765G, a mid-range chip that supports 5G and without the massive price tag of a flagship device.

I was a bit worried about performance going into this review. OnePlus has always been the “flagship killer” in my mind despite the company dropping the branding years ago. How could this phone be a flagship killer without a flagship processor?

Well, the mad men, they did it. The Snapdragon 765G does a great job powering the Nord and you’d never really know you were using a midrange chip if you weren’t looking for it. Sure, there are some dropped frames or an app may take a little bit longer to open but I’m really happy with how it’s performing, especially when you take into account its price tag.

Helping matters is 6, 8 12 GB of RAM, paired with 64, 128, or 256 GB of storage. The Nord utilizes UFS 2.1, an extremely fast storage standard, that helps the divide store and recall information than other devices. While some were disappointed that the Nord didn’t come with the newer UFS 3.0 standard, I don’t think you’d see much of a difference if it had and little things like that matter to the bottom line.

If you do get low on power, the Nord supports Warp 30, one of the newest and fastest charging standards from OnePlus. The company states that the Nord can charge up to 70% of its battery in half an hour. We saw speeds very close to that, with the phone fully charging from dead in about 50 minutes.

Battery life is so good and charging is so fast that you can easily go to bed with the device next to you, wake up and charge while you’re getting ready for work and be just fine all day. In fact, I did exactly that for a week and had to top off only once, a day where I had to use my phone an inordinate amount during my day job.

The only thing that could’ve made this even better was the addition of wireless charging. I do understand that they have to watch the bottom line, but wireless charging coils are cheap. When consumers are deciding how to spend their hard earned money, one or two premium features like wireless charging can be the difference between them picking up your phone and picking up another. 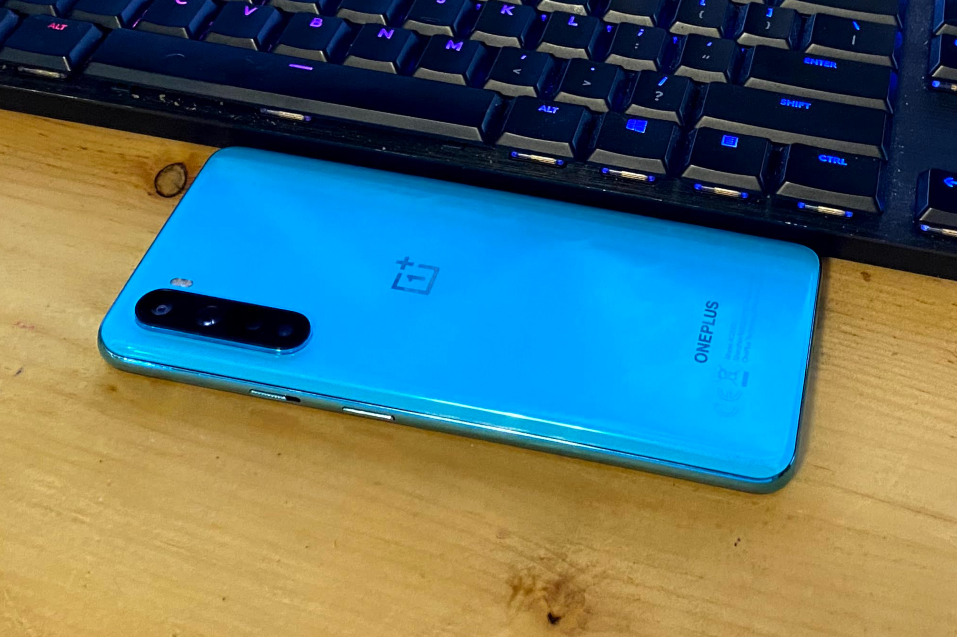 The OnePlus Nord is almost a great phone. And there’s no qualifier here about the price, it’s just damn near a great phone. You can nitpick things like the plastic frame of the phone, lack of expandable storage, or the hole-punch camera, but the only true downside in my opinion is the camera array. OnePlus seriously needs to step up its game if it wants to play with the big boys like Google, Apple, and Samsung.

I would love to see a few premium features added to further versions of the Nord to really crush the competition in the mid-range market. Every time I put my SIM card in the Nord, I miss wireless charging. Yeah, I know it has excellent battery life and super fast WARP 30 charging, but wireless charging is just one of those things I can’t get away from.

Other devices like the LG Velvet both feature wireless charging and are pretty close to the same price. Plus, the Velvet lets you attach a secondary display, add a micro SD card, or experience a far superior camera layout and app. I believe that adding one or two features really sits the Nord above all the other devices, but could come at the cost of some sales of OnePlus’ more premium devices.

And that’s really the rub. OnePlus doesn’t want to eat into the sales of the 8, 8 Pro, or 8T so the Nord is missing a few features we’d really appreciate here. In a vacuum, we can say we want these features, but we’ll probably never see them because OnePlus sells devices in the real world, not a vacuum.

Can we recommend that OnePlus Nord? Absolutely. It’s a wallet-friendly 5G device that looks great and is damn fast in nearly every aspect.