LG’s reputation in the Android world isn’t exactly the best right now. The South Korean company hasn’t had the easiest time differentiating its phones or telling people why they should buy them.

Sure, it plasters advertisements everywhere, including your TV, the internet, radio, and billboard, but do you know why you should buy one of its phones after listening to them? Feels like every other phone out there, right? Based on a new strategy introduced earlier this year, LG agrees.

The company went back to the drawing board and came up with something new. While the V series is still kicking around after the death of the G series, the LG Velvet is something completely different. Combining premium looks and the best software suite we’ve seen from LG, this mid-range 5G device might just turn some heads… If LG can get anyone to listen. 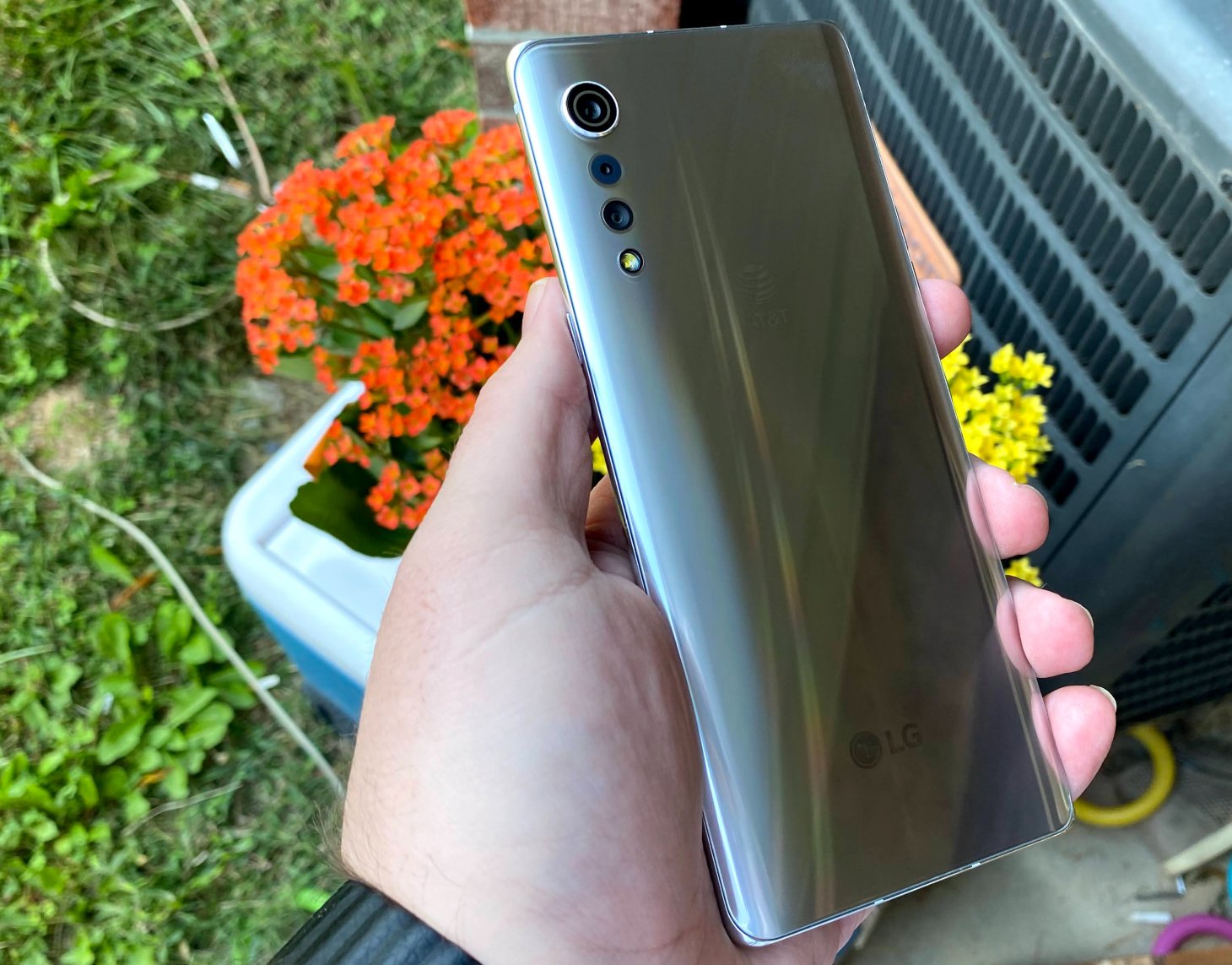 Taking the LG Velvet out of the box is an experience. The device is absolutely beautiful with a mirror-finish back, a display which has bezels slimmer than you’d imagine from press photos, and a solid feel in the hand.

LG also decided to stretch the phone out, so now the Velvet is very tall, but much easier to handle because of how thin it is for a device with a 6.8-inch display. It’s the best of both worlds.

One area that I wish LG would take a look at is their display. While the quality of the display is absolutely fantastic, I believe the era of curved displays needs to come to an end. It’s difficult to grab onto the aluminum side rails because the screen curves in a dramatic fashion.

I don’t experience many accidental touches (kudos to LG’s software team) but it does make the phone harder to use and feels less secure in my hand. Sure, it looks sleek but after you take it home, you want a good user experience and this isn’t it.

This is a very pretty phone but there’s also depth, too. The software experience is far, far better than any other LG device I’ve ever used. Yes, it still comes with about 37 million preloaded apps (Thanks, AT&T), but beyond that, I’m pretty happy with what LG has done here.

First, let’s get this out of the way: if you’re a stock-Android lover, this one probably isn’t for you. The Velvet’s software reminds me a lot of Samsung’s offerings as well– but that’s a good thing.

You can see thought was put into design choices like moving the menu and buttons further down the screen while displaying information and graphics in the top half of the screen. LG doesn’t go as far as Samsung with this, but it’s a good start. 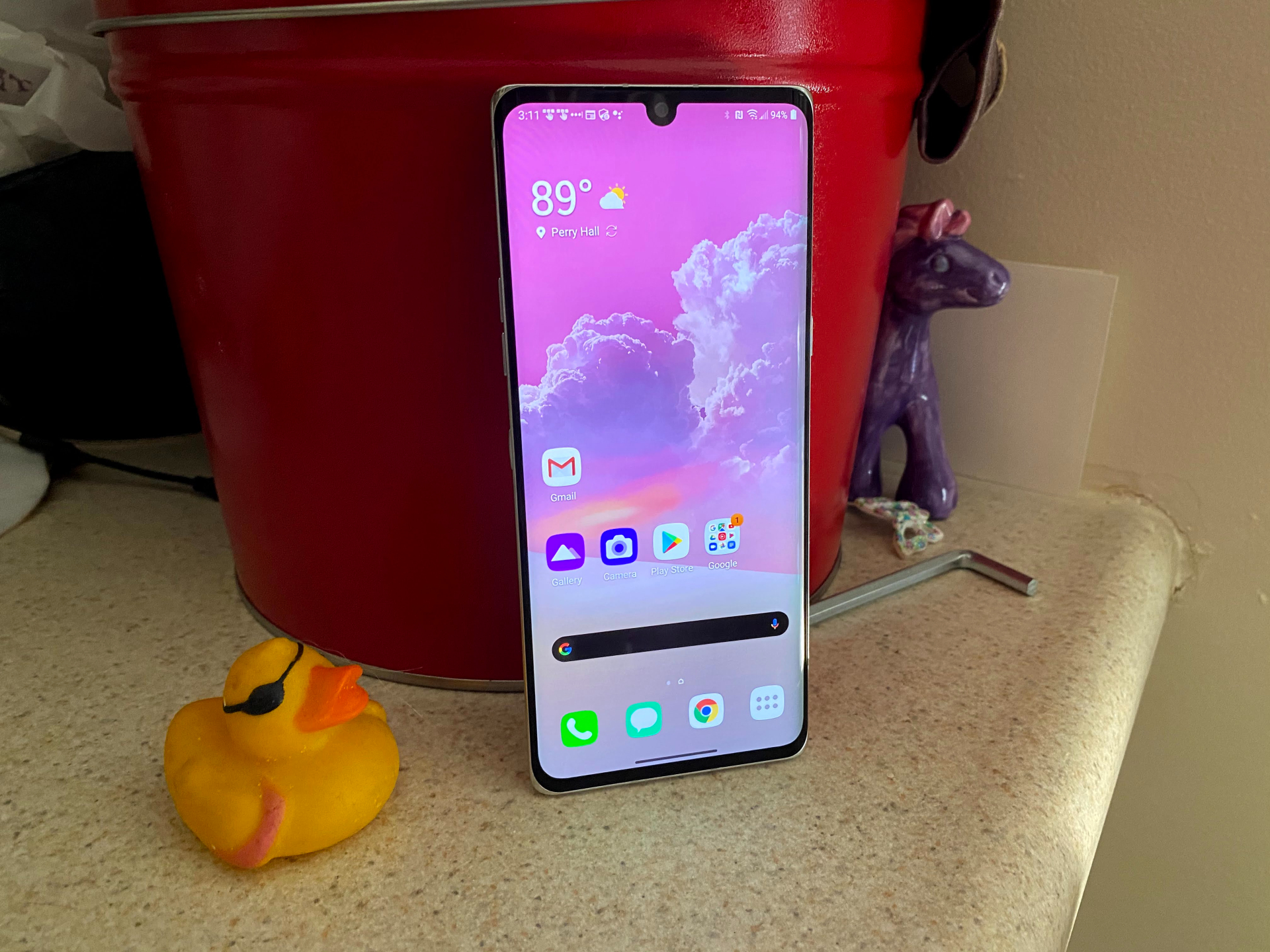 There’s also an impressive amount of options and settings in the device. You have everything from fine-tuning audio controls, display options, intelligent charging controls, a theme engine, and far more. But more than offering these features, it’s that LG has gotten out of its own way to do so.

No longer do we find things buried three or four menus deep. No longer are things half explained with users left to figure it out on their own. Again, there’s some real thought put into this.

The one thing I would love LG to work on, though, is the stock keyboard. This can be changed easily by downloading Gboard, but working with LG’s keyboard is a frustrating experience. It’s laggy, glitchy, and makes some pretty strange suggestions.

Frustrating things even more is the fact that it’s probably the best keyboard to use with the dual-screen display so you have to keep going back and forth between Gboard and LG’s keyboard if you want the best of both worlds. But hey, at least we have that option, right?

Before we move on, I just want to point out how good LG has been at updating its software so far. I, like many others, laughed when LG said it was making a huge push into software development so it could better support its devices. It even opened up software houses just for this purpose. But then, we saw no results.

But, I think that hard work (and millions of dollars) are starting to pay off. The monthly security updates are coming at more regular intervals now and that’s a refreshing change. But, where LG will be judged is how fast it can deliver full Android software updates (c’mon, Android 11!) and just how long LG is planning to support its devices for.

Speaking of the dual-screen display, it’s one of my favorite things about the LG Velvet. It’s an optional accessory but comes bundled with the phone most of the time. With it, you can turn your device into a powerful pocket computer that’s only going to get better over time.

You can currently launch multiple apps, and that’s the best way to use the dual-screen. Because of the large hinge in the middle, using something like Google Maps across both displays isn’t a great experience, but it’s not really designed for that.

Playing a game and displaying a controller on the second screen is great. Opening up two documents at the same time is wonderful. Video editing is… well, you can do it if you want to.

For gaming, the Velvet is a dream. LG has included a dedicated Game Mode, which turns one of your displays into a full-screen (and customizable) controller. Then, throw the actual game on the other screen and enjoy something that you only wish you could have. Unless you actually pick up the Velvet, V60, or something like the Galaxy Z Fold 2 (which is a different experience entirely).

The display case charges via a pogo pin adapter that you can plug any USB-C cable into. I’ve heard people complain that you need an adapter but in my usage, I’ve never had an issue doing it.

The adapter lines up with the case via magnets so you never miss and you can just leave the adapter connected to your cable when you’re not using it. You’ll probably want to try and find an extra adapter, if you happen to travel frequently and don’t want to have to take your Velvet out of the dual-screen case just to charge it.

2020 has been a bit weird in terms of tech. Most companies decided that the Qualcomm Snapdragon 865+ was too expensive and decided to go with the cheaper 765G instead. That’s exactly what LG did for the Velvet, which is why the device is priced right around $600 at the time of publishing. 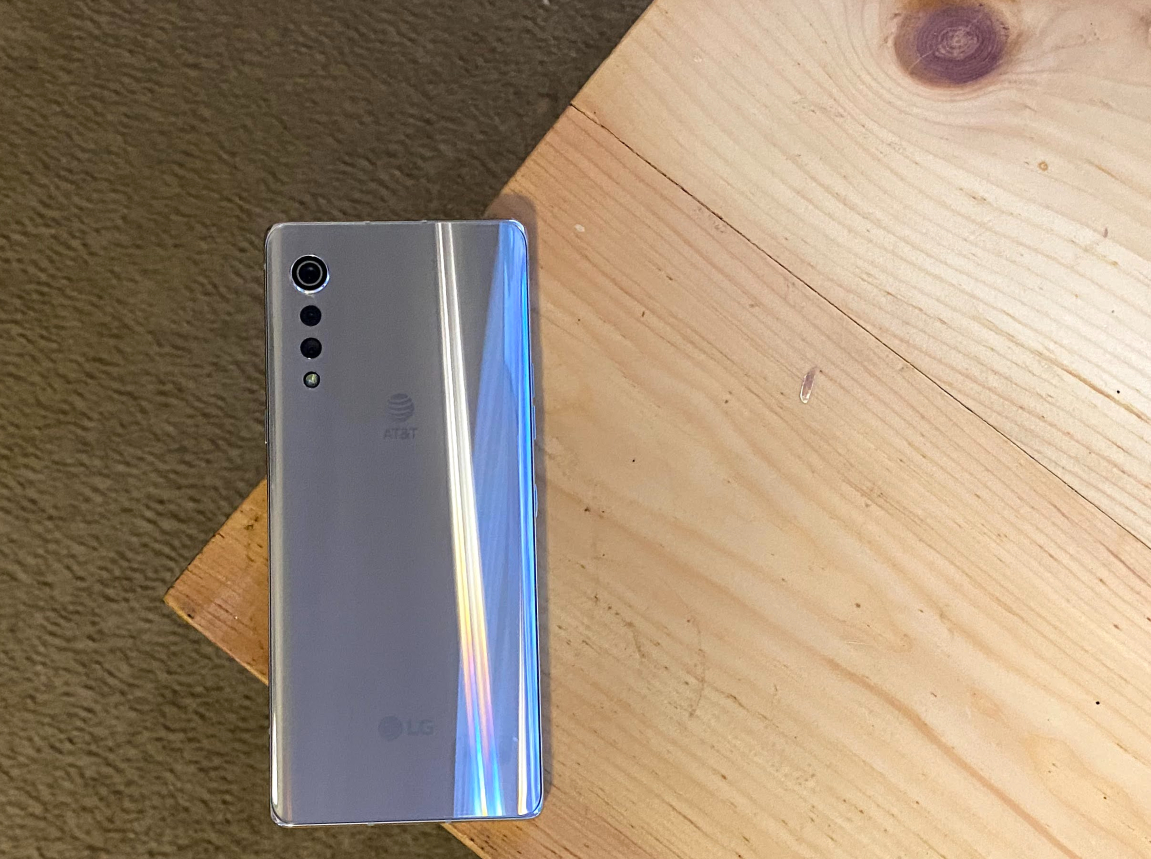 In terms of performance, it’s… fine. This isn’t going to blow anything out of the water and benchmarks are going to make it seem like a potato, but in real life usage, it does the job just fine. There are a few stutters and some lag there, but I’m hesitant to attribute that to the processor and not to LG’s software or something running in the background.

I’ve used other devices with the 765G and performance has been great. In fact, you can barely notice you’re not using a flagship chip, if you can notice at all. I hope that I’m right and the little issues I’ve seen can get ironed out in a software patch. Truth be told, while I’m all for LG’s changes on the software front, they may have done too much and it does show a bit on the Velvet.

Battery life is another story. I was initially ready to criticize LG for making a phone super thin and killing the battery capacity, but there is a 4,300mAh battery here, which makes it competitive with pretty much every phone on the market.

In terms of real-world usage, battery life is pretty good. I averaged between five and 6.5 hours of screen on time each day and would go to bed with anywhere from 15 to 30% of my battery left. I achieved these results with all radios on, using the dual-screen case for an hour or so each day and screen brightness at auto. 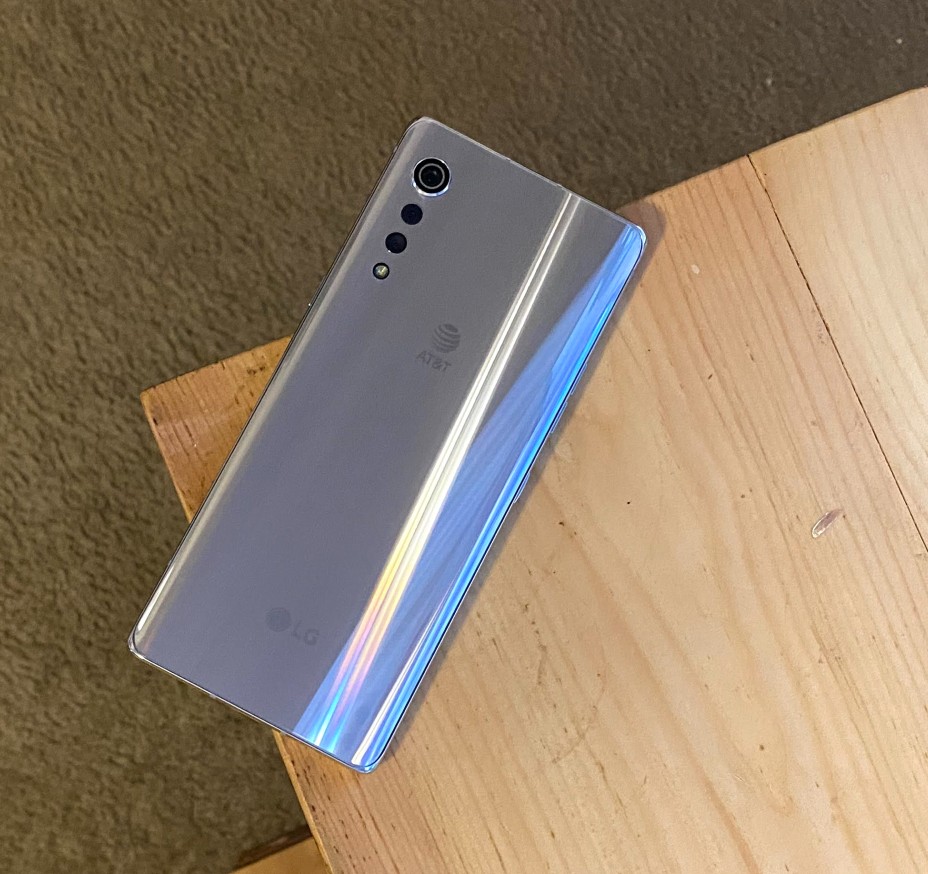 This isn’t going to win any marathons, but I struggle to think of any phones that are this thin with this good of battery life.

What I do really like, however, is that LG included fast charging (up to 15W) and fast wireless charging (9W) on board. I’m the type of person who likes to stick my phone on the wireless charger at night to charge so it’s nice to see LG adding it after competitors like OnePlus took it out of devices in similar price ranges.

We also see intelligent charging controls so that your phone doesn’t charge too quickly at night. Fast charging produces heat and heat is the enemy of good, long last battery life. Over the life of your device, your battery degrades and heat doesn’t help that out. LG allows you to charge your phone slower at night, thus reducing heat and ensuring the long life of your battery.

The camera on the LG Velvet is good. It’s not crazy Samsung/Google/Huawei levels of good, but for almost everyone on the planet, it’ll do just fine.

Looking at camera samples, you can see that LG is probably changing its processing and leaning a little more into saturation, rather than true tones. We’ve seen this throughout the years, especially on Samsung devices, that blow out colors so they feel more vibrant and alive. I don’t necessarily mind this but it is something you should keep in mind if that sort of thing matters to you.

Beyond that, you’ll find the same full suite of picture modes and filters that you come to expect from LG. Video, however, has taken a bit of a step back. We don’t see quite the amount of control we’ve come to expect on past V-series devices, but as we said earlier, it’ll be fine for most people. 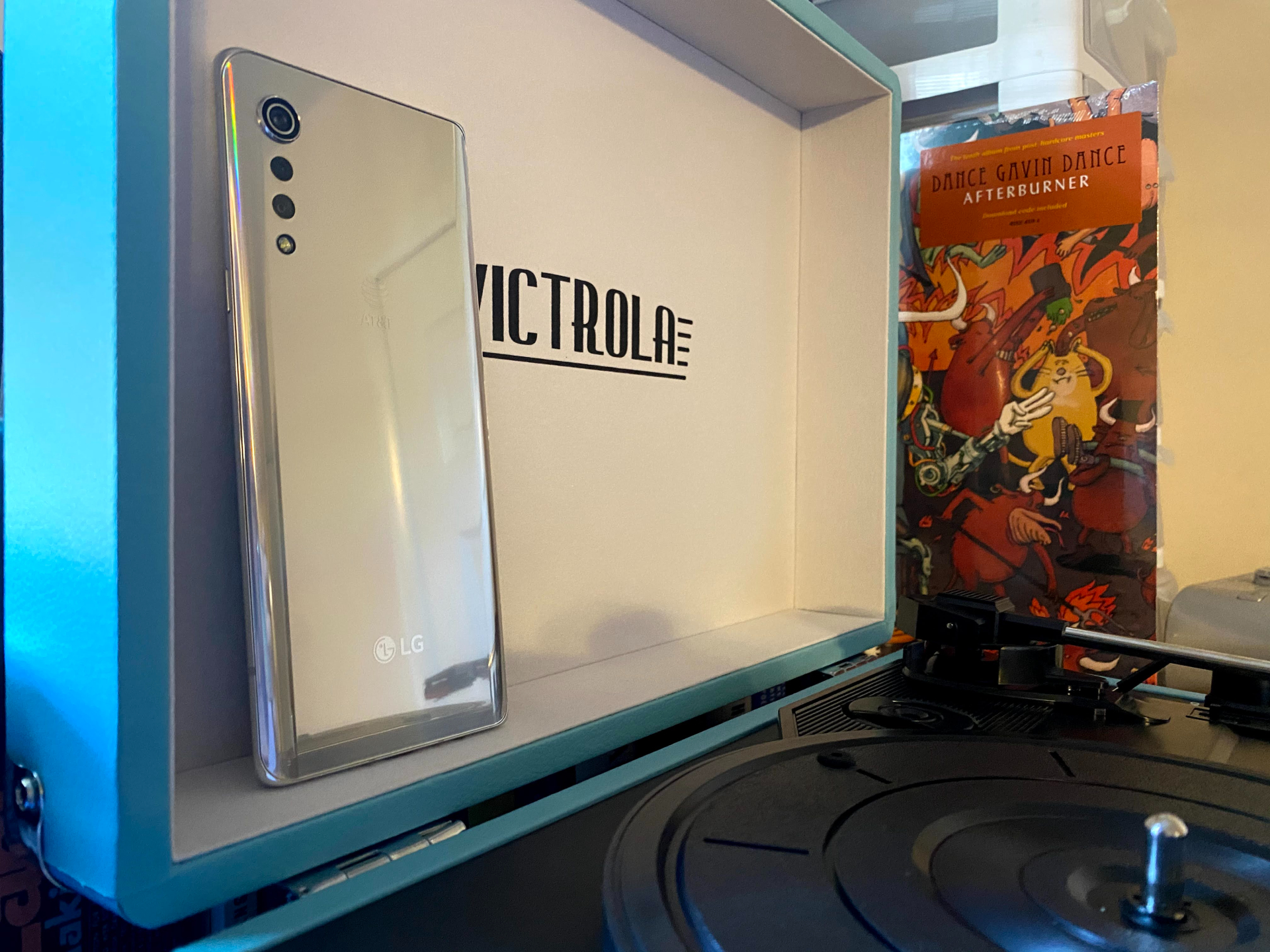 The LG Velvet can be just about anything you want it to be. It’s a mid-range device with pretty decent performance and 5G support. It’ll do great with everything except the most challenging apps. And even then, it should be fine, it just might take a little longer to launch that app or show a few less frames in that game.

Out of the box, it’s one of the sleekest and sexiest phones on the market, and trust me when I tell you that it looks far better in person. But, if you want more, slap the dual-screen case on there and you have a slimmer Fold 2-like experience that can launch multiple apps at the same time and allow you to get some work done on the train or browse Reddit as you’re watching YouTube videos. I believe that once more office apps begin to support multi-display support with the Fold and Microsoft Duo becoming more popular, the Velvet will prosper as well.

I wasn’t sure how LG’s strategy was going to plan out when they first announced they were going back to the drawing board. I was even less confident when renders started to appear because the Velvet looks like every slim and sexy slab of glass released in the last five years. But then I picked one up and started using it. It’s the first time I really don’t have any complaints about an LG phone in a long, long time.