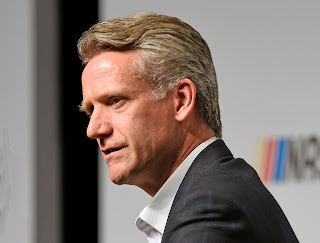 In addition to sickening
thousands and killing nearly 100 in the United States, the COVID-19 virus has
thoroughly disrupted the lives, careers, educations and leisure activities of
virtually every American. NASCAR fans are no different, with the Coronavirus
pandemic forcing the sport to take an unplanned (and thoroughly unwanted)
eight-week hiatus in the months of March, April and early May.
Scheduled NASCAR Cup Series
races at Atlanta, Homestead-Miami, Texas, Bristol, Richmond, Talladega and
Dover International Speedways have been postponed, with makeup dates still to
be determined. The sanctioning body updated the media Tuesday, insisting that
their goal is to run all 36 scheduled NASCAR Cup Series races, as well as the non-points
All-Star Race. Their stated desire is to leave the 10-race playoff schedule
untouched and unaltered, concluding the 2020 season as scheduled at Phoenix Raceway
on Sunday, Nov. 8. That will require the sanctioning body to reschedule all seven
postponed races within a tight, 17-week time frame, with only two empty
weekends (the pre-planned summer Olympic layoff) open for rescheduling between
the resumption of competition on May 9 at Martinsville Speedway and the start
of the at Darlington Raceway on Labor Day Weekend.
Clearly, traditional
Saturday/Sunday scheduling will not be enough to dig NASCAR out of the massive hole
left by an eight-week COVID-19 layoff.
NASCAR President Steve Phelps
admitted yesterday that there are a lot of things on the table, including some
scheduling options that have not been previously utilized. Midweek events seem
likely going forward, and while Phelps said that no decisions have been made on
whether to reschedule events during the planned, two-week Olympic break, it is
difficult to image officials leaving a pair of prime, midsummer weekends open,
while simultaneously scrambling to reschedule races on Wednesdays and
Thursdays.
Depending on the status of the
pandemic, NASCAR could see its way clear to return before the anticipated
Martinsville date in May, racing in front of empty grandstands. Moving
Talladega, Texas or Homestead-Miami – three of the farthest-flung events on the
postponed schedule — into the vacated Dover date on May 3 would make Dover
available to serve as the meat in a three-race-in-eight-day
sandwich, beginning with the regularly scheduled New Hampshire race on Sunday,
July 19, followed by a midweek stop at The Monster Mile and a rescheduled
Richmond event on Sunday, July 26 (the first Olympic weekend).

NASCAR could manufacture an
additional open weekend by moving the All-Star Race from Saturday, May 16 to
the following Saturday; the day before the Coca-Cola 600 at Charlotte Motor
Speedway. While necessitating a Saturday doubleheader with both the NASCAR
Xfinity and Cup Series in action, the move would free-up the May 16 weekend for
another rescheduled race.

An additional race can be made
up the weekend of August 2; the first weekend of the Olympic Games.
Bristol’s postponed event
could conceivably be rescheduled in conjunction with the track’s annual Bass
Pro Shops/NRA Night Race on Saturday, Sept. 19. After racing on Saturday night,
the Cup teams would simply remain in town and run the rescheduled event on
Sunday afternoon, as part of an unprecedented Night/Day Doubleheader. This
scenario would obviously impact the playoff schedule, but would allow one of
the postponed events to be made up with no more than an additional hotel night required
for NASCAR’s traveling teams.
That leaves just one more race
to be rescheduled, almost certainly as a midweek event. Wednesday or Thursday
night racing is far from ideal, and race teams will be
hard pressed to compete three times in an eight-day window. But it can be done,
if the will is there to do so.
NASCAR’s Phelps said he is working
closely with race teams to ensure “financial viability” until racing
can resume. He also announced that all testing –
including wind tunnels, shaker rigs and the like — has been banned until
further notice, including driver simulators.
The
intent behind the move is twofold. First, it is designed to save teams money
during the layoff by keeping them away from the wind tunnels, which rent out at
approximately $3,000 per hour. In addition, it further encourages teams to
leave their testing and wind tunnel personnel at home, exercising personal
distancing, rather than congregating in large numbers to conduct research.
If
teams know the competition is not testing, they are much more likely to wave it
off themselves.
Phelps said it is too early to
tell if the 2021 NextGen race car will be delayed as a result of the COVID-19
virus. A two-day test scheduled for Atlanta Motor Speedway this week was
cancelled, and there is no word on when testing might resume. While the
specifics of the new car have almost all been determined at this point, more
component testing is needed before suppliers can finalize their plans and begin
production.
Phelps assured reporters that
the sanctioning body is “working diligently to stay on schedule,” but further postponements
could result in delays for the new car’s scheduled July rollout.