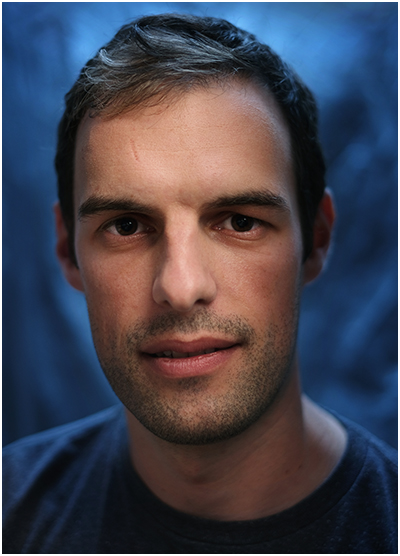 Photos by Sara Lando and David Hobby except where noted.

Just as most of us are either right- or left-handed, it is said that we all have a dominant side of our brain as well. Left-brained people are supposed to be more analytical and methodical, whereas right-brained people are more artistic and creative.

For most photographers, one of these two areas is probably a relative strength; the other a weakness. But ideally, you need the whole package. Which is something we were exploring earlier this month in Porto, Portugal.

I co-taught a class at the Porto Photo Fest with Italian photographer Sara Lando, whom many of you will remember from her previous work on this site.

In many ways, Sara is the opposite of me: I am male. Sara is female. I am a left brain, Sara is a right brain. Sara is also a stylish dresser.

The class was set up to combine our two approaches — me methodical and Sara creative — to help photographers learn to identify and work around their blind spots. And trust me, methodical me was watching and learning from creative Sara the whole day.

In fact (and without my revealing one of her favorite techniques) she had an exercise arranged for about 3pm in the afternoon that literally made me cringe. Not only would I not have suggested it, I thought it just might train wreck the whole day irreparably.

The exercise she forced upon our group of captive guinea pigs was only three minutes long. But it produced what were easily some of the best photos of the day. And even further, it left people shooting more fearlessly for the remainder of the afternoon.

In fact, the biggest problem I saw with the class was the limited amount of time we had remaining after that exercise. Because they were just now starting to stretch.

So yeah, we all have our strengths and weaknesses.

Needless to say I have never done this before. I was equal parts eager and anxious.

Here was the format. Picture a medium sized room, mostly filled with about 35 seated people. The room itself is white-walled and busy. It is in a Hard Rock Cafe, and there is rock memorabilia everywhere. The shoot was improvisational. We were to photograph one of the attendees, with a construct generated on the spot.

We asked for volunteers. About a half-dozen people anted up, placing their name on a small sheet of paper. The name was drawn randomly and Tiago, our new subject, was brought up front.

Lacking an assignment or construct, it was decided that we would do a close-in portrait of Tiago as he sometimes envisioned his future self: an explorer, visiting far-away places and cultures.

Now it is time to problem-solve. While interpersonal Sara is talking with Tiago, methodical me tackles the lighting.

We have a mostly white and graphically busy room. There are white window shades we could use as a background. But we do not have enough space to move far enough away from them to control the background tonality.

And I want some tonal depth to the background. So we find and move a modest sized platform that is covered with dark grey carpet and stand it on its side. It’s not very big, but if we seat Tiago on the ground it’ll be tall enough. Now we have a dark background that we can build upon.

We have some speedlights and small soft boxes to work with. We’ll end up using two lights, one bare and one in a soft box.

Our class was entirely taught in black and white, so my main gel pack is back at home. But I keep a couple warming and cooling gels taped to most of my flashes. I have with me a full CTB, a 1/2 CTB, a 1/2 CTO and a Rosco 08. 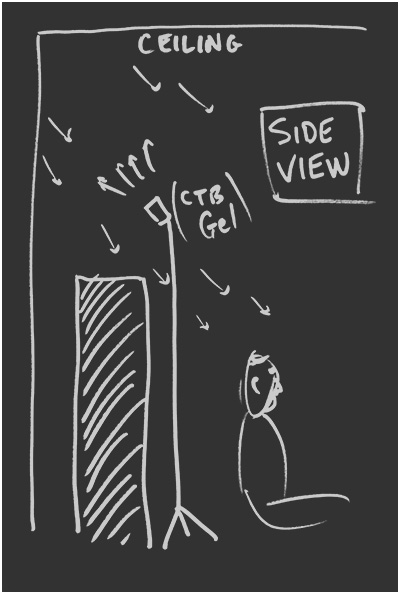 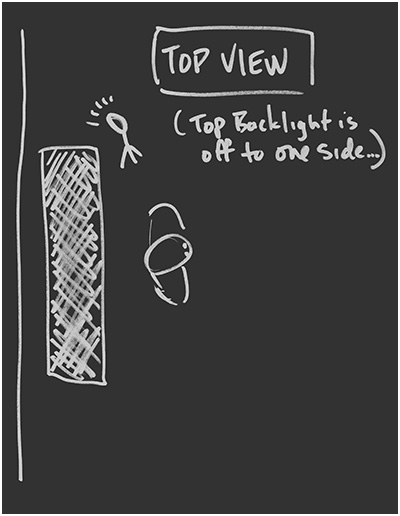 Into the (thankfully) white ceiling, I fire light #1. It is a bare speedlight with the full CTB gel. This light will create a wrapping soft/blue environment that will vaguely come from the top/back direction. I test it out with my hand, and it looks like this: 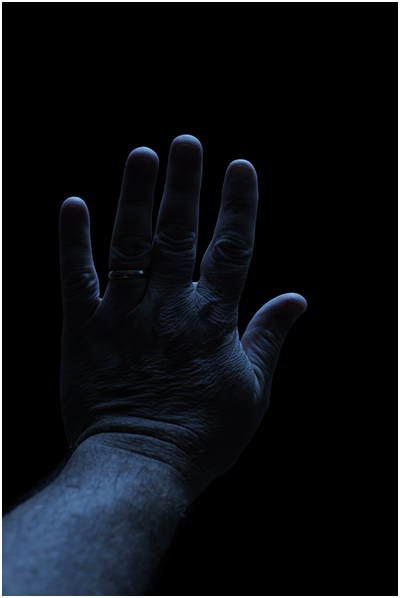 We progress through some photos with this black background for a bit, but they all needed a little something more. Sara had brought a large, wispy plastic tarp that she used in a variety of ways. It soon it found its way to our backdrop. With the blue light cascading across it, and shooting wide open, it felt almost like a glacier.

Perfect. Not super literal, but it alludes to someplace far-off. This will work for Tiago’s construct. Bringing him in now, you can see what the blue/wrap backlight alone does to both the background and to him: 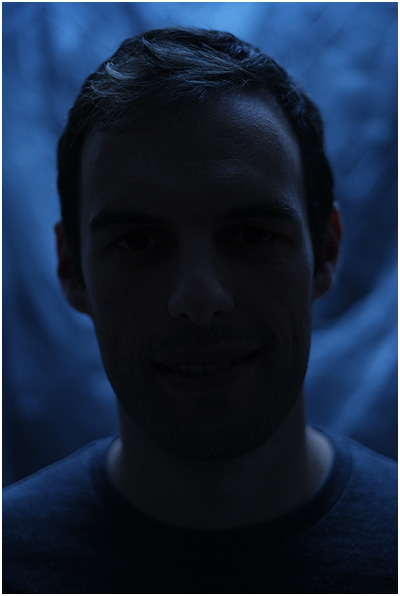 This feels better. His face is mostly in shadow, with some blue light wrapping around his cheeks and shoulders. To that, we’ll add a warmed up (Rosco 08) light in a small soft box.

I want to light his face, but I want to keep the warm light from eating up the blue we have built. That way, we’ll get a really cool and three-dimensional transition/wrap from front to back that not only shifts light direction but also light color.

In short, I am gonna feather the living crap out of this key light.

Here’s a BTS iPhone shot (sorry, it was a dark room) from the side (thank you, Natahsa!). It’s kinda hard to tell here, but this light is literally pointed back at Sara. 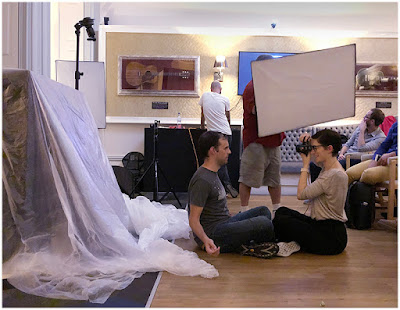 If you could see it from the top, it would look almost exactly light this: 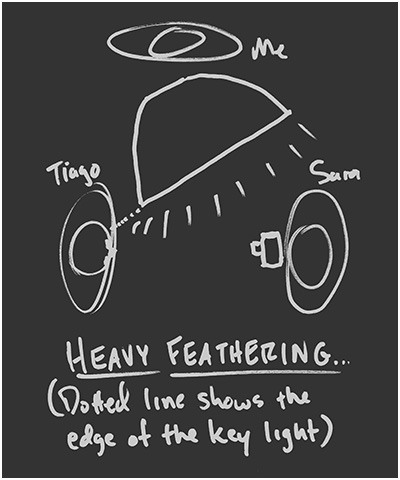 As you can see, if you extend a line directly from the front plane of the soft box, that line will tell us exactly where the key light will fall on of the camera right side of Tiago’s face.

In person, it feels/looks very extreme when you are doing it. But that’s how far you need to feather it to close off the illumination on the key light side of his face.

So on both the camera-right and camera-left sides of Tiago’s face, the light quickly transitions into shadow as it wraps toward the back of his head. Or rather, it wraps into the blue zone we have set up with the other light.

This direction/color transition, along with the fact that it is falling out of focus (Sara was shooting at f/1.4) makes this photo feel more like a medium format chip than an APS-C sized chip.

But Why is the Light Horizontal?

It’s not horizontal, it is vertical. Maybe not to you, but it is vertical from the point-of-view of Tiago’s face. Which is what matters.

Remember, this light is super-feathered away from him. So if “A” is the edge of the box that is closest to him, and “B” is the top edge of the box, I guarantee you the “A” dimension looks a lot longer than the “B” dimension.

Tons of stuff. Most of which I am not privy to. But she is thinking out loud, which helps. Here is some of the stuff I remember.

First she is solely concentrating on Tiago. She is creating a shared space for him as a subject, even though they are doing this in front of a roomful of photographers.

Second, look how physically close she is. Again, this goes to breaking through a personal wall and it makes for a more intimate portrait.

The shape of the face is not really a function of the lens’ focal length. It is a function if camera-to-subject distance. Your brain interprets the face shape and knows this photo was made from a working distance that equates to that of two people who know each other well.

This is a great technique to know. Camera distance alters face shape. Which means it can be used to revert facial shapes toward the mean, or to increase/reduce intimacy in a portrait. (Same with camera height and relative power, BTW.)

Third, look at Sara’s posture. She’s clearly mirroring him, which is also a technique often used to break down interpersonal walls and build closeness. Seriously, I am watching her and thinking about how clumsy I am in all of these areas and I am almost laughing out loud at my own ineptitude.

Similarly, she told me afterwards how cool it was to completely offload responsibility for the lighting to me, and to be freed to do the things she does best. Honestly, you are probably more left- or right-brained than you are left- or right-handed.

Fourth — and I love this — look at Tiago’s posture in the side BTS shot. Sara directed him into this shape: Elongate your neck. Drop your shoulders. Extend your hands back behind you.

Basically, every part of Tiago except his face just moved backwards a little bit. Look what this does to his neck and jaw line.

Okay, here’s some quick guy-vs-girl. My friend (and former model, now photographer) Peter Hurley does this too. But in his way, he directs the subject to jut their chin forward.

Yeah, it works. But as someone who has tried this on himself countless times in a mirror, it feels WEIRD. I cannot even make myself comfortable doing this. So it is not something I would ask my subjects to do. I’ve actually tried it, and it was just like … no.

But this shoulders down, long neck, shoulders-arms-hands back thing? That feels natural. Hell, even I feel like a dancer. And seriously, have you seen me?

I Have So Much to Learn/

Watching close-in as Sara, a right-brained photographer, worked with a subject was such an eye-opening experience for me. I want to co-teach more with her.

Actually, what I’d want to do is to have two groups, A and B, who rotate between the two photography styles. I teach a new lighting approach, they work it out, then they go right over to Sara to have her add a layer of interpersonal technique to it. Swap, rinse and repeat. And I want it to be at least two days long, to allow enough to time to build some muscle memory for all of the things we’d be learning.

By now if you’re still reading, I’m assuming you have at least some idea if you are more methodical or creative-brained. And I hope you are seeing that what you probably need to be concentrating on is the weak side of the two.

Yeah, it’ll probably be awkward and painful. But metamorphosis usually is.
__________

This article was published as an entry in Strobist Lighting Cookbook. New articles and how-to’s appear monthly. To receive notifications for new posts, you can follow via email or via Instagram.