Today’s top-tier smartphones are undeniably desirable; just look at Samsung’s Galaxy S21 lineup or Apple’s latest iPhone series. But we don’t all have massive wads of cash burning holes in our pockets – and the good news is, there’s no need to spend four figures to get a smartphone that combines top performance with a gorgeous design.

READ NEXT: The best budget smartphones

Indeed, not only do the latest mid-range smartphones look and feel as slick as their “flagship” counterparts, they can actually outperform them in key areas. So even if you’re considering splashing out on a top-of-the-range handset, you’d be well advised to check out the mid-range before spending the cash.

Here’s our guide to what to look for – along with our regularly updated selection of the best mid-range smartphones in 2021.

Best mid-range phone: At a glance

How to buy the best mid-range smartphone for you

What is a “mid-range” smartphone?

When we talk about mid-range smartphones, we generally mean handsets that cost between £300 and £500 to buy outright. It’s true that the latest and greatest smartphones keep on getting more and more expensive – Huawei recently announced a foldable phone costing £2,000 – so strictly speaking the middle of the market is a moving target. But our price bracket is the one to focus on, as it’s where you’ll find the best balance of price and features.

Should I buy SIM-free, or does it make sense to commit to a contract?

A 24-month contract keeps your up-front costs to a minimum, but if you sit down and calculate the total amount that you’ll end up paying over the course of those two years, you’ll almost always find that the SIM-free option works out a lot cheaper. That said, it’s always worth checking for special offers, as occasional deals can be highly competitive. The other advantage of going SIM-free is that you can sell your phone on and upgrade whenever you want, rather than having to wait for the end of your contract – by which time your handset may well be distinctly out of date.

What should I look for in a mid-range smartphone?

Everyone’s priorities are different – so it’s a good idea to work out what yours are. Is a lengthy battery life at the top of your wish-list? Or are you more interested in taking better-quality pictures?

In all cases we’d suggest you take a look at the phone’s internal specifications: you’ll want a processor that’s powerful enough to keep up with all the applications you’re going to use, now and in a year or two’s time. While you’re at it, check that there’s plenty of internal storage too. If this can be expanded with a microSD card, that could be a big bonus.

The phone’s display is also crucial – after all, this is the bit you’ll be staring at. You can find plenty of mid-range handsets with great-looking screens, but you can’t take this for granted, so make sure to read our reviews before buying.

Where are all the mid-range iPhones?

Apple seems to be focused on the upper end of the smartphone market at present. Cost-cutting models such as the iPhone SE are sadly no longer being made; the current “cheap” iPhone is the 11, which starts at a not-exactly-wallet-friendly £739. Hopefully, Apple has something up its sleeve, but right now, if you’re looking for a new phone on a budget, Android is your best option.

Not that there’s anything wrong with Android. It might take some getting used to if you’re accustomed to iOS, but the two operating systems aren’t all that different these days. Probably the biggest issue with making the switch is that you won’t be able to bring your iOS apps and accessories with you.

The best mid-range smartphones you can buy 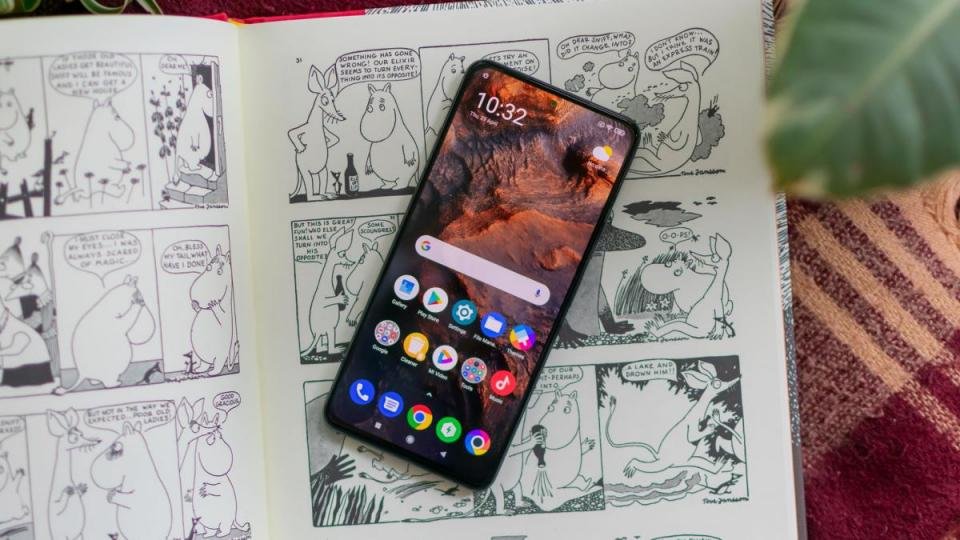 The Xiaomi Poco F3 is the perfect handset for the budget-conscious buyer. The brand might still be a bit of an unknown in the UK, but the Poco F3 is stupendously good value for money, and it even outperforms handsets that cost double, and in some cases triple, the asking price.

An easy recommendation if you aren’t comfortable handing over £700+ on the latest and greatest handsets, the Poco F3 is fitted with all the best bell’s and whistles: it has a Full HD AMOLED screen, a Qualcomm speedy Snapdragon 870 chipset, a large 48MP camera sensor and a battery that effortlessly outlasts a good chunk of the market, too.

Its bargain price is its main appeal, of course, but since there are so few compromises the Xiaomi Poco F3 is a no-brainer if you’re hoping to get the best value for money.

2. OnePlus 8T: An exceptional phone at a fantastic price 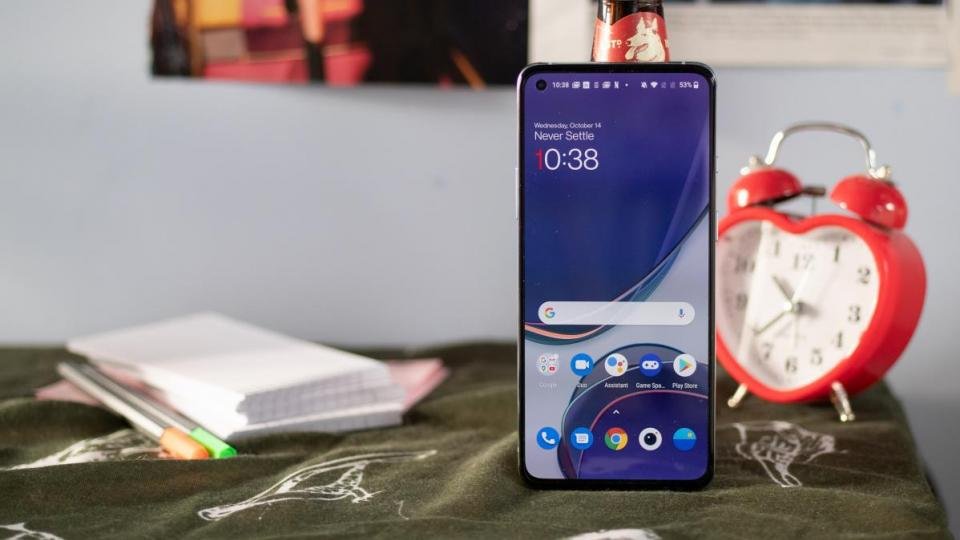 Over the years, OnePlus has quite rightly earned a standout reputation for its well-priced flagship-beating handsets. The Chinese smartphone giant’s mid-range smartphone, the OnePlus 8T, is undoubtedly its finest offering yet.

Indeed, it’s arguably one of the best-priced smartphones we’ve ever tested. That’s partly because it offers super-fast 65W charging (going from zero to full in just 40 minutes), but it’s also inherited the buttery-smooth 120Hz screen from the OnePlus 8 Pro, as well as the beefy Qualcomm Snapdragon 865 processor. Its 26-hour battery life is equally impressive too.

What makes all of this even more appealing is the fact that the OnePlus 8T costs half as much as most current flagship handsets, while offering similar features. At this price, you really can’t do much better. 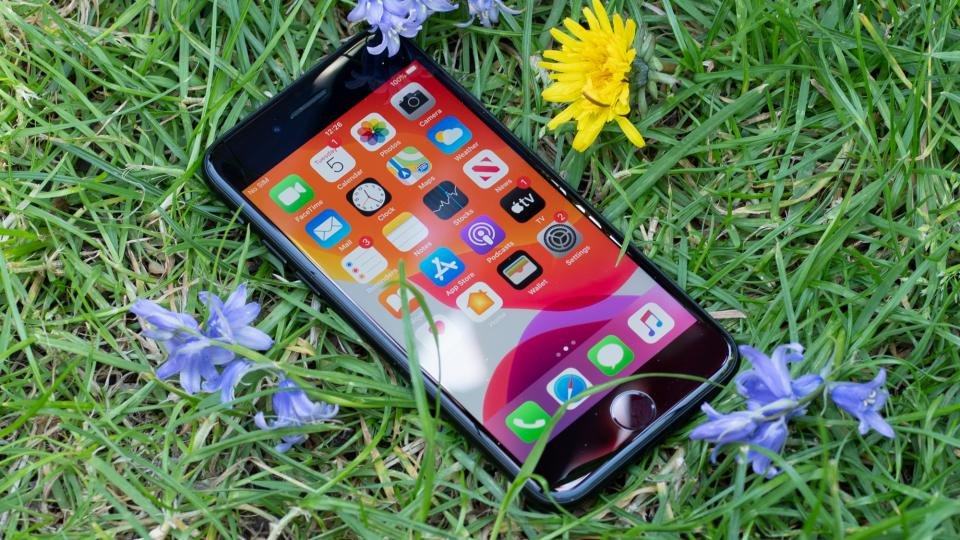 It might look like a bit of a relic, but the iPhone SE (2020) is Apple’s best-value smartphone yet. Apple might prefer customers to spend more on the iPhone 12, but the lower asking price for the iPhone SE makes it a far more exciting value proposition, and your wallet will likely breathe a sigh of relief in return.

Despite costing more than half the price, the iPhone SE (2020) uses the same speedy processor as the iPhone 11 – the A13 Bionic – and its camera is up to the job, too. The only fly in the ointment is that its battery life is rather short by modern standards, but that’s nothing the speedy 18w charging can’t fix. The iPhone SE is also a solid choice if you aren’t a fan of those big-screened handsets of late – the small 4.7in screen is perfect for one-handed use.

If you’d rather not spend the silly amounts of dosh for an iPhone 12, and don’t mind sacrificing a few camera features and a smaller design, then the iPhone SE is absolutely the best-value Apple phone you can buy right now. 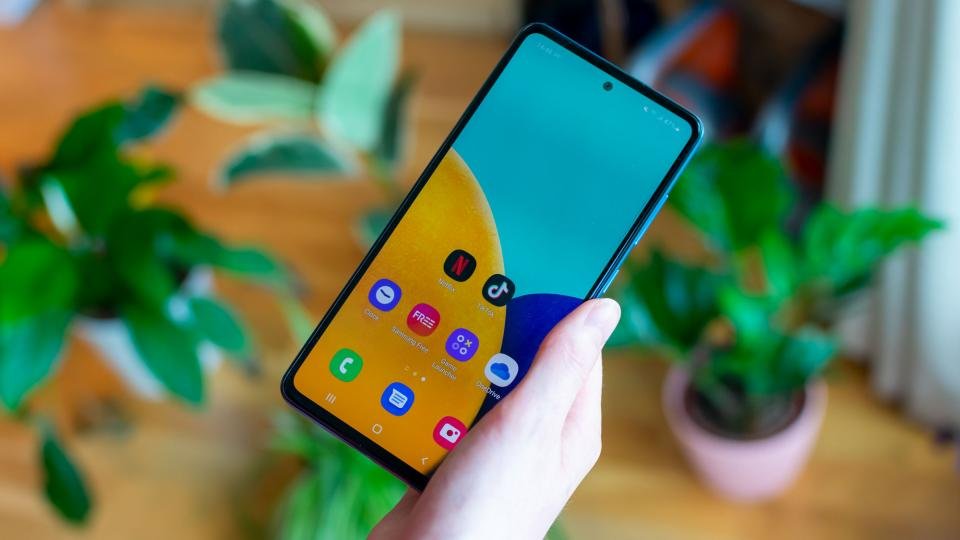 The Samsung Galaxy series of phones doesn’t begin and end with the S and Note lines. Samsung’s A-series lineup is a very different proposition, offering flagship-like goodies without the high price tag – and the Galaxy A52 5G is no different. An impressive, affordable smartphone that not only looks good, the A52 5G also has a great screen and more than enough power for most people – even if its processor isn’t as fancy as its siblings.

It also takes great pictures for the price, and if battery life is at the top of your smartphone-buying agenda, then you’re in luck: the Galaxy A52 5G lasted over 18 hours in our battery life test. If you’re a Samsung fan, or simply want a reliable yet impressive smartphone that doesn’t cost the earth, then the Galaxy A52 5G might be the phone for you. 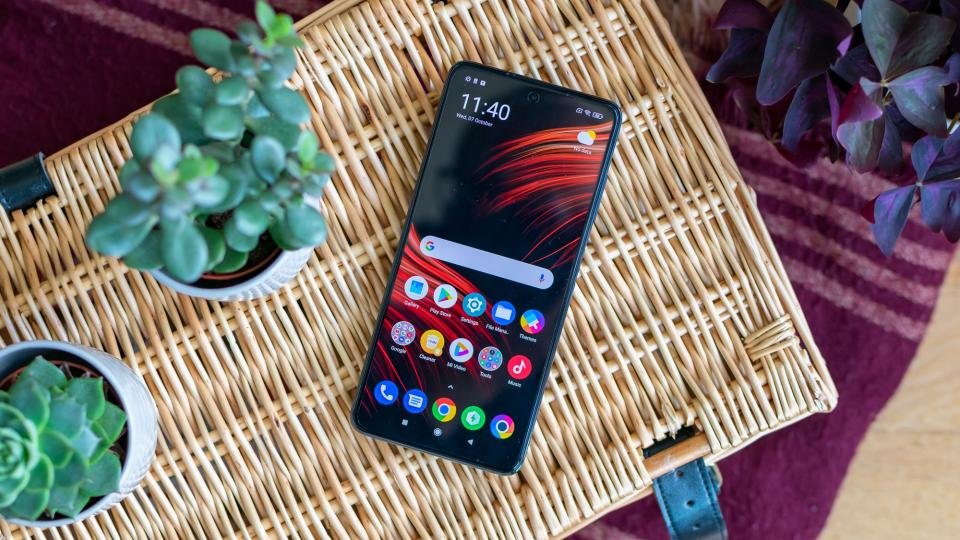 The cheapest handset on this list, the Xiaomi Poco X3 NFC is as equally formidable. With flagship-class specifications at a vastly reduced cost, Xiaomi’s well-priced smartphone is a cut above the rest, with astonishing performance courtesy of the Qualcomm Snapdragon 732G chipset, along with an exemplary quad-camera array (which includes a 64MP sensor).

The Poco X3 NFC’s 120Hz Full HD display is also a highlight, allowing for silky smooth scrolling and high frame rate mobile gaming. If your buying budget can’t quite stretch to some of the other options on this list, then there’s no doubt that the Xiaomi Poco X3 NFC should be at the very top of your smartphone buying agenda. 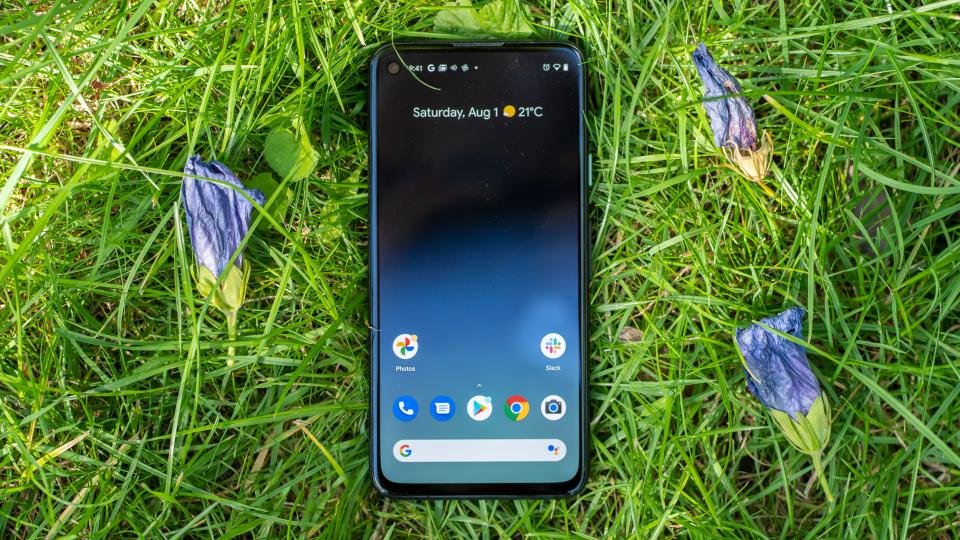 Google continues to push the mid-range market with the Pixel 4a, representing exceptional value for money. Despite having a softer impact on your wallet, the Pixel 4a is a well-rounded package with cuts in all the right places. Performance is solid for the price, it looks just as lovely and the screen is slightly bigger (and better looking) than its flagship counterpart, too.

Crucially, however, the Pixel 4a retains the same top-end camera tech and refined Android UI. Pictures look fantastic, and Google’s Night Sight shooting mode impresses yet again when it comes to low-light photography. if you want a phone that can take pictures worthy of being on your Instagram gallery, without having to break the bank, then this is it.

Read our full Google Pixel 4a review for more details 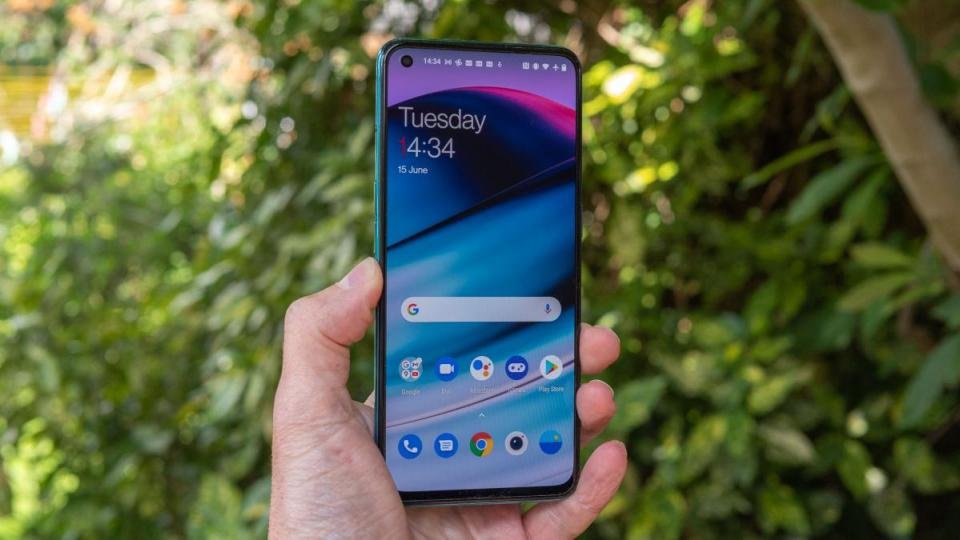 If there’s one thing we’ve been able to rely on in the fast-moving world of smartphones in recent times, it’s that every time OnePlus releases a smartphone, it goes straight to the top of the charts for value. With the Oneplus 9 straying further away from OnePlus’ budget roots, the newer OnePlus Nord CE 5G is much closer in value with what we’ve come to expect from the Taiwanese company. It’s essentially flawless at this price, too.

Sacrifices have to be made in order to bring the price down (it’s well over half the price of the OnePlus 9) but for the most part, these cuts have been made in the right places. The screen is flat, rather than curved, and it lacks any official IP rating. Otherwise, the OnePlus Nord CE 5G is as good as phones costing hundreds more. It’s a smart-looking smartphone with plenty of cameras and one of the latest 5G-enabled chipsets: the octa-core Qualcomm Snapdragon 750G.

Where it counts, the OnePlus Nord CE 5G is a cracking choice for anyone put off by flagship prices. 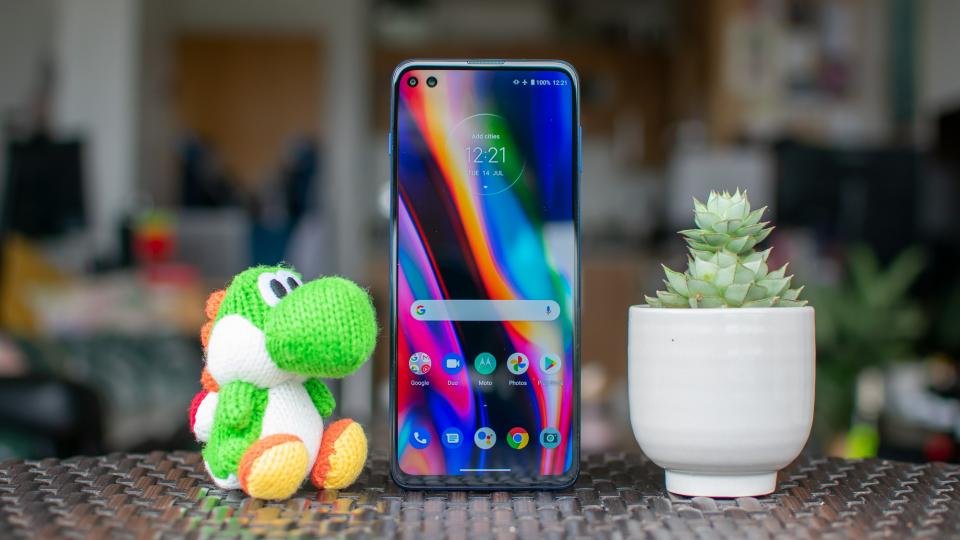 If you were put off by the sky-high prices for 5G phones and contracts at launch, it might be worth taking a second look. The Moto G 5G Plus was the first 5G-equipped smartphone to break the £300 barrier, and it’s no slouch either.

It’s an absurdly impressive smartphone in all other respects, too. It has a large, 90Hz screen, astonishing performance within its price bracket and the quadruple-camera arrangement isn’t to be sniffed at, either. Honestly, even if you don’t live in a 5G area at the moment, the Moto G 5G Plus is well worth buying if you’re in the market for a new mid-priced smartphone. 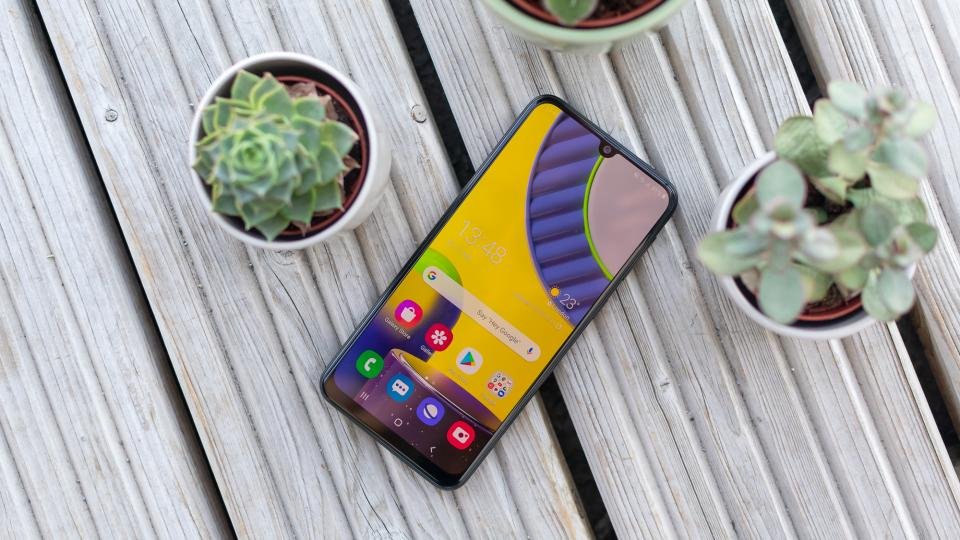 We’ve often recommended Samsung’s affordable smartphones in the past, but the M31 is the first of its kind here in the UK. Price-wise it’s really in the budget category rather than the mid-range but it benefits from a gigantic 6,000mAh battery, making the Galaxy M31 the longest-lasting smartphone we’ve ever tested, and by quite a margin too.

Offering best-in-class battery life, the Galaxy M31 reached over 30 hours in our video playback test, and it should comfortably last for over two days if you forget to charge it overnight. Not only is it an absolute monster when it comes to battery life, but performance is decent, the cameras are excellent for the price, and the screen is lovely too.