iD Mobile is best known as a no-frills mobile network, offering cheap, rolling monthly SIM-only contracts in the style of Giffgaff, along with some impressive cut-price two-year contracts across a wide range of phones. More recently, however, iD has adjusted its business model to bring in 12-month contracts that throw in some extra data in return for a longer-term commitment. You’ve still got the option of the one month rolling deals, but are iD Mobile’s packages good enough to make signing on for longer worth your while?

iD Mobile review: What do you get?

ID Mobile might be behaving more like the established mobile networks, but it’s still incredibly competitive when it comes to selling smartphones on a contract, and that doesn’t just apply to the flagship models, but its budget and mid-range phones

Looking for a new iPhone 12? At the time of writing, you can have one on iD Mobile with 50GB of data for £35 a month over 24 months plus £99 upfront. That works out at just £940 where a similar deal on Three, O2, EE or Vodafone would cost you somewhere between £1200 and over £1400. Buy a Samsung Galaxy S20 FE 4G and it will cost you £33 a month plus £50 upfront, or £841 over two years. That will save you between £95 and £200 on the same phone with less data elsewhere. Great budget and mid-range phones like the Google Pixel 4a or Samsung Galaxy A51 can be had for under £20 a month. The only problem is that the best deals can quickly, if temporarily, go out of stock.

iD Mobile is still a no-frills network, but that doesn’t mean it’s bereft of any features, with the most useful being a data rollover feature, where any unused data is rolled on to the next month. Sky Mobile’s similar rollover feature is more flexible, allowing you to hold on to your data for up to three years, but it’s still a great way to make sure you’re making the most of your allowance, especially on the lower-end plans.

If iD Mobile has a weakness, it’s performance. It runs as a virtual network on top of Three, and the latest data from RootMetrics (for the second half of 2020) shows Three trailing EE and Vodafone on speeds across much of the UK. Where EE achieves a UK median download speed of 42Mbits/sec, with Vodafone behind on 21.1Mbits/sec, Three can only manage 13.9 Mbits/sec. Across most of the sixteen major metropolitan areas where RootMetrics runs in-depth testing, Three had a median download speed of between 10 and 20Mbits/sec where EE delivered over 30Mbits/sec across all of them, and 50Mbits/sec in a dozen. 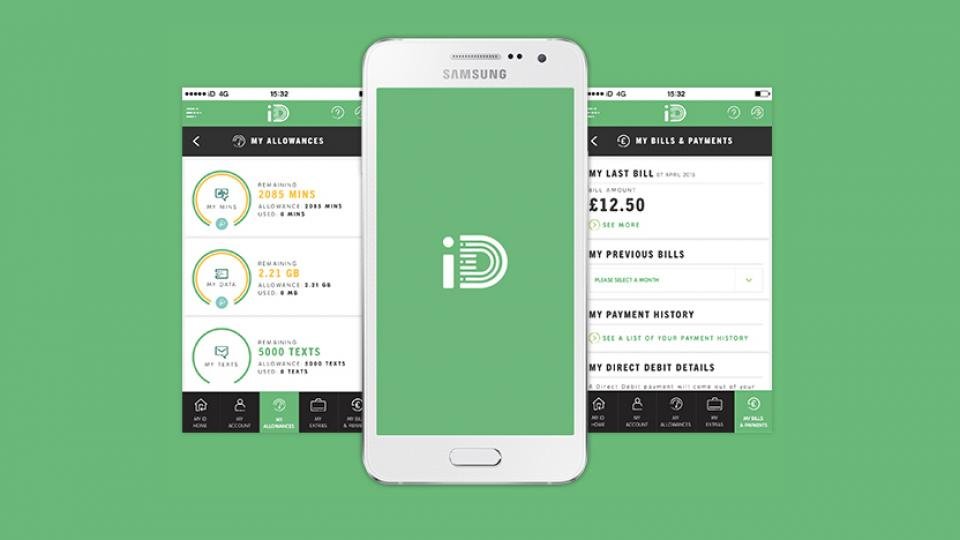 On the plus side, Three looks to be turning things around when it comes to 5G performance, which bodes well for iD’s own new 5G plans (which come at no extra cost if you have a compatible 5G phone, as listed here). In RootMetrics’ latest 5G tests it posted scores in all 16 test cities, with median download speeds of at least 100Mbits/sec in seven of them. Three has invested heavily in 5G bandwidth, too, which could put iD in a good position as more of us transition to 5G.

As for coverage, RootMetrics data shows that Three provides a good 4G signal across nearly all of the UK, with the exception of some areas of Scotland. What’s more, it’s 5G network is beginning to spread out of the major cities to cover more areas of the UK. If you can get a decent service from Three you can get a decent service from iD, and that seems to be the case in more and more locations.

Like most networks, real or virtual, iD Mobile offers free inclusive roaming across the EU. Outside that, prices aren’t horrific in most regions. For instance, you’ll be charged £1.68 per minute to make calls and £1.50 to take them in Australia or the USA, while texts will cost 42p. However, data is just 30p per megabyte, when some other networks will charge you £5 for the same amount. Three gives you free roaming across a wider range of destinations, though, while EE, Vodafone and O2 can work out cheaper internationally if you buy a £5 or £6 daily add-on, so we wouldn’t say that iD was the best option for frequent travellers.

iD Mobile allows you to put a spending cap on your account, starting at £5 over your regular plan cost. Otherwise, it isn’t a big service for additional features, as you’d expect from a low-cost, no-frills option.

Sadly, we don’t have a full set of figures for iD Mobile from Ofcom’s latest annual customer service survey. What we do know is that iD has fewer customers with a reason to complain than most other networks, at just 5%, though the number of Ofcom complaints per 100,000 subscribers – 15 – is a little higher than the average. Still, iD fares better than Three, Virgin and Vodafone on both counts, and average call waiting times are lower, too.

Connection speeds make a massive difference to some users, and if that’s you, then you might want to think about budgeting for a pricier EE or Vodafone plan instead of signing up with iD. If you want value for money it’s a different story; nobody else gives you so much data at such an affordable, low rate. Throw in the lure of further 5G rollouts and iD’s attractive handset deals, and iD still beats the competition on overall value – and holds on to its Expert Reviews Recommended award.