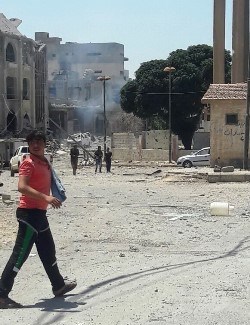 The humanitarian and health situation in Aleppo has reached critical levels5 August 2016 – Dr Hatem Abu Yazan, the General Director of the Children’s Specialised Hospital in Al Shaa’ar in eastern Aleppo City, was on duty in the hospital’s neonatal section on the first floor when he heard the sound of an airstrike. It was a sound that he was used to, and he was wearing his stethoscope which dulled the noise. He did not pay much attention until he saw the doors implode inwards and the windows shatter. Together with a nurse and another doctor, he lifted 9 babies from their incubators and carried them to the basement, where he knew they would be safer. “We waited for 10 minutes for the attack to subside, and then we ran back up to bring the incubators down to the basement, so that they would not be at risk in case of another attack.

A few days earlier, Dr Abu Yazan had been overseeing 2 premature 6-day-old babies in intensive care when he was told a third baby in critical condition had been admitted. “The hospital only had 2 functioning intensive care units, so I had to make a decision,” he said. “I removed one of the babies – the one that was in a less stable condition – and replaced him with the newly admitted baby who had a stronger chance of survival. If more beds had been available that day, all 3 babies would have survived, instead of 2.”  These are the heart-breaking life-and-death decisions facing medical staff on a daily basis in Syria as war rages, and as hospitals continue to be damaged or destroyed in the conflict.

As the siege continues, large numbers of civilians continue to be at extreme risk. Up to 250 000 besieged people in eastern Aleppo City currently lack access to sufficient food, and medical care, with the United Nations predicting that remaining food supplies are adequate for up to a maximum of one month. Since 7 July 2016, the delivery of medical supplies to eastern Aleppo City has been halted due to intensified conflict, with available stocks inside the city expected to last 3 months.

Attacks on health care facilities leave civilians without access to life-saving servicesWhile the demand for medical care has increased, especially for severe war-related injuries, the escalating violence and besiegement of the city has resulted in reduced availability of health services due to attacks on health facilities, shortages of health care workers, and limited medicines and medical supplies. In July 2016 alone, there were at least 10 confirmed attacks on health facilities in Aleppo city, some being hit twice in the span of 12 hours. According to eastern Aleppo City local health authorities, 8 out of 10 hospitals and 13 out of 28 primary health care centres are now partially functional or out of service as a result of these attacks.

At least 6 health care workers have been reportedly killed in Aleppo City as a result of attacks on health care in 2016, decreasing a steadily shrinking pool of available health professionals. According to health cluster data, for every one medical doctor that is killed or flees, more than 40 Syrians are deprived of medical consultations per day. According to eastern Aleppo City local health authorities, only 35 medical doctors remain in the city, and their capacity to cope with the excess demand has been overwhelmed. Dr Abdelqader Farah in Aleppo City recalls that on 2 August at midnight, a heart surgeon working under extreme pressure suffered a cardiac arrest, and with no defibrillator available in the city, doctors could only provide him with life-saving care by moving a patient in less critical condition from the intensive care unit.

More than 15 medical doctors who were outside the city before the seige are now unable to return. Although they are aware of the risks and challenges facing them as health professionals, they are determined to join their colleagues inside the city and continue working to save lives. 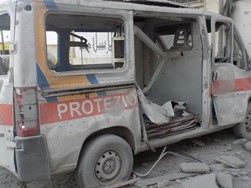 A much needed ambulance rendered non-functional following attackSince the escalation of the conflict in Aleppo city, the number of hospital admissions tripled from 1226 in January 2016 to 4398 in June.  War-related trauma cases almost doubled from 1900 cases in January 2016 to 3485 in June, while the number of major surgeries more than doubled from 783 in January 2016 to 1847 in June. Due to the heavy caseloads of emergency and trauma cases, hospitals have limited all their other services in an effort to conserve available stocks of medicines and supplies. Patients who require referrals outside the city are given as much treatment as possible, but many have died or suffered permanent disability as a result of limited access to specialised medical care. A few weeks ago, 35-year old Yousef was caught in violence as he was walking home from work, and admitted to hospital with a serious injury to his leg. Because no specialised orthopaedic surgeon was available in East Aleppo city, the trauma surgeon on duty was forced to amputate the leg, which could have been easily saved under the right circumstances.

Up to 90 000 children are among those besieged in Aleppo. Dr Hatem Abu Yazan, the general director of the Children’s Specialised Hospital in eastern Aleppo City, says that only 2 paediatric doctors are left in the city, each seeing 100–150 children per day, more than double the usual caseload.

Following attacks on Al Quds hospital and Omar Ibn Abdel Aziz hospital in June and July, both facilities are now non-functional, Al-Zahraa hospital is now the only facility offering obstetric services in eastern Aleppo city, with 2 gynaecologists handling a caseload of 30–35 deliveries per day. Doctors are working under extreme pressure with limited support, and disruptions in sanitation are placing the lives of mothers and newborns at significant risk. A few days after Al Hakim Pediatric hospital was hit, causing one newborn to die due to interruptions in oxygen services, 3 babies in ventilators developed infections as a result of interruptions in sanitation services and also died.

Patients suffering from chronic diseases, such as heart disease, kidney diseases, diabetes and hypertension, often lack life-saving treatment, and are at extreme risk. Following an attack on the WHO-supported Al-Ihsan charity haemodialysis centre in June, the centre is currently non-functional, and diabetic patients are now faced with limited access to treatment. Insulin and blood pressure medicines in eastern Aleppo City are expected to last only 2 months, and cancer patients have been forced to stop all treatment due to zero stock of medicines. X-ray facilities are also not available in the city. Similar limited services also exist in west Aleppo.

As the situation in eastern Aleppo city continues to deteriorate, WHO and health cluster partners have prepositioned health and surgical medicines and supplies. WHO alone has provided supplies for more than 78 700 beneficiaries to 13 nongovernmental orgaanizations in northern Syria to be delivered to operating health facilities in eastern Aleppo city once a humanitarian corridor is opened. An additional shipment of medicines and medical supplies for almost 150 000 beneficiaries has been prepositioned in northern Syria.

Above all, WHO continues to call for an end to attacks on health care, the protection of the dedicated and courageous health care providers and the patients they serve, and the availability of health care to all Syrians in need, regardless of political affiliation or geographical location.